“We built it so that it’s accessible and rideable for little kids on strider bikes, to pro-level BMX riders,” Jerold Hoshowatiuk, Bike Cochrane Society.
Jul 15, 2020 12:00 PM By: Tyler Klinkhammer 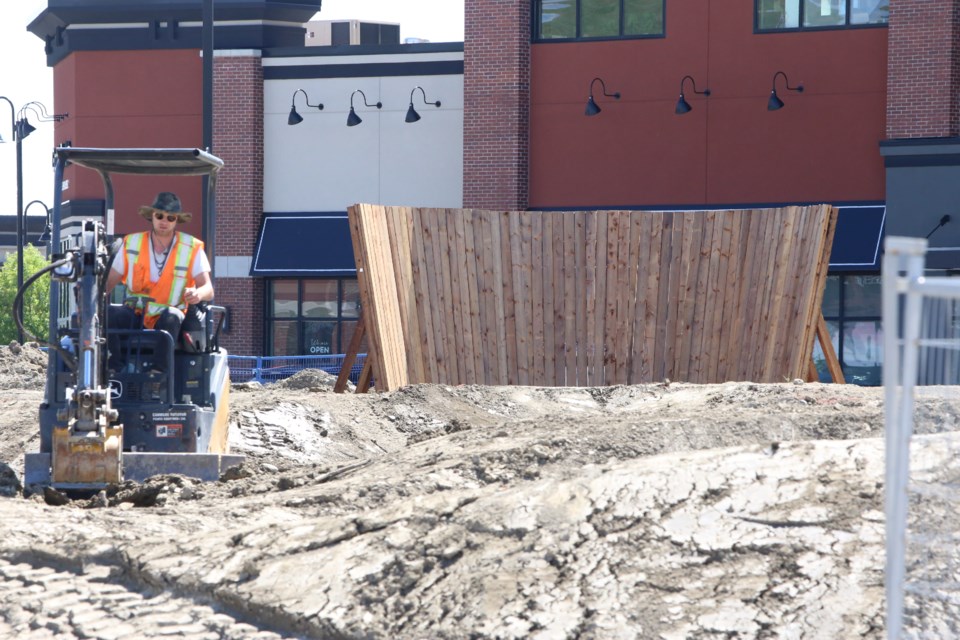 Construction crews are busy putting the finishing touches on the features in the park. (Tyler Klinkhammer/The Cochrane Eagle)

Located in downtown Cochrane adjacent to the Garmin building, the flow park should be completed later this month, said Jerold Hoshowatiuk, one of the founding members of Bike Cochrane.

“Mother Nature is just making it take a little bit longer for us,” Hoshowatiuk said. “The rain that we’ve been getting has just not been very conducive for us to have the crew out there to do the jobs that need to get done.”

Between COVID-19 and the weather, the project has had a few delays, but should still be finished on time. When the project was conceived, the target date for completion was July, and Hoshowatiuk said he feels confident they will meet that deadline.

“We said we wanted it done in July and we’re doing everything we can to stick by that,” he said.

Bike Cochrane was started in the fall of 2018.

After a number of individuals approached town officials about constructing a bike park, Cochrane Town Council put them in contact with each other.

Since then the group has been advocating for the cycling community in Cochrane.

“When we got together it was 35 people upstairs in the Half Hitch. Out of that initial grouping six of us got together and formed the Bike Cochrane Society,” he said. “It’s all local people from Cochrane who have been here for a while, who wanted to help with the vision of the town to make it a bike-friendly community, and this bike part is just one of the first projects we’ve been working on.”

Hoshowatiuk said that their group has received a lot of support from members of the community and businesses alike. The ground that the park is on belongs to Springwood Developments, the company that is developing the Quarry area.

“They gave us a lease on it for free, so we actually own the park. It’s not run or maintained by the town or anything like that.”

Hoshowatiuk said that the crews are putting the finishing touches on the park to ensure that it is smooth and rideable.

“Some of the finishing, some of the shaping has got to get right. It’s not just random piles of dirt. Everything is built with a flow and a design in mind, so it’s very cohesive," Hoshowatiuk said. "You don’t just go from pile to pile, it's built-in a way that’s very flowy and smooth."

There is something in the park for people of all skill levels at the park, said Hoshowatiuk.

“We built it so that it’s accessible and rideable for little kids on strider bikes, to pro-level BMX riders,” he said. “You’re not going to see a little guy on a strider bike hit the whisky barrel wall ride, but there are definitely going to be a lot of bumps and little turns that are going to be fun for the whole family.”