“I even told these kids how proud of them I was the other night. They’re coming out here every day and busting their butts, doing the skills and drills, with no carrot to reach for because there are no games.”
Sep 24, 2020 3:00 PM By: Tyler Klinkhammer 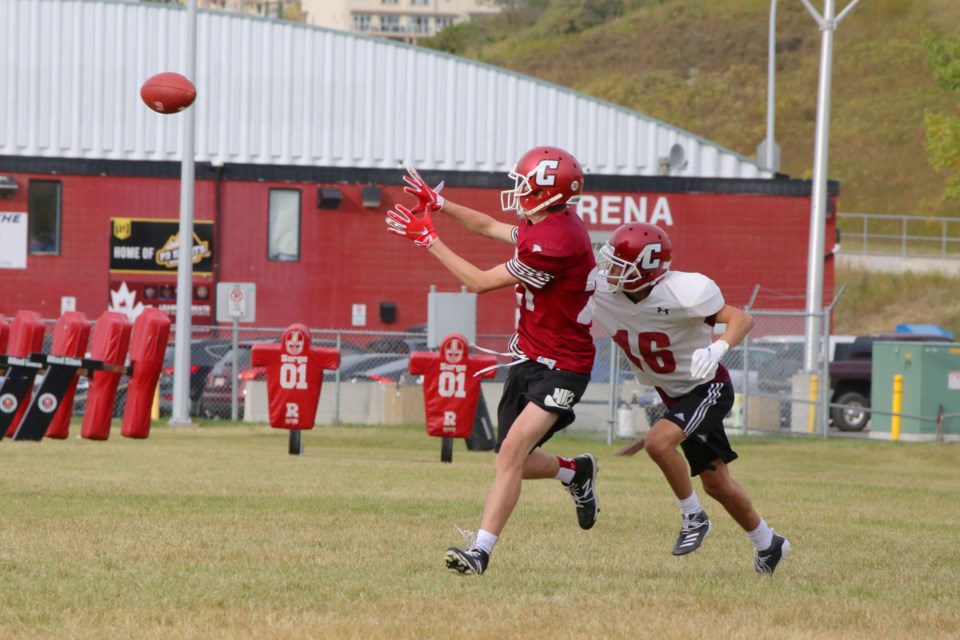 The Cochrane Cobras are in a development-only season, but the coaching staff are working hard to keep the Cobras culture alive and thriving at Cochrane High. (Tyler Klinkhammer/The Cochrane Eagle)

COCHRANE— The Cochrane High School Cobras recently had a visit from some Cobras alumni who are now taking part in the University of British Columbia Thunderbirds and the University of Calgary Dino’s football programs.

Head Coach Robbie McNabb said it was great to have some visiting alumni on the field again.

“It’s great when alumni come back. The kids love it,” he said. “I think the kids that we currently have kind of look up to them and say ‘wow, man, he’s at the Dinos,’ or ‘he’s at UBC,’ or the University of Regina, wherever we have players, and they say ‘yeah, I can do that too.’”

The students that have played for the Cobras also enjoy the experience as well, McNabb said. So many of the kids sacrifice a great deal to perform at such a high level, they enjoy the adulation they get from their younger counterparts.

“They’ve worked hard for it, right? They sacrificed a lot, training and school and everything to get to the level they’re at. It’s not easy playing U-sport right now. It’s a lot of commitment and a lot of time,” McNabb said.

He added, seeing the former Cobras get to the next level can help them feel like they have a future in the sport.

The nature of the visit was mostly a social one, McNabb said, because the returning players had to social distance from their old teammates.

Although, he noted, he would have liked to be able to give the kids a little insight into what the next level looks like.

“Hopefully, eventually, these kids will come back, coach and give back some of what they’ve taken from the program,” he said.

McNabb and the Cobras are currently in a development season until further notice from Rocky View Schools.

“The [Alberta Schools Athletic Association] has put together support for little mini-cohort leagues and stuff like that, and right now our school division is reviewing that and going to make the safest choice for staff and students and athletes, and we’ll abide by that for sure,” he said.

Despite not playing any games, the practice-only season is going well for the students.

“I even told these kids how proud of them I was the other night. They’re coming out here every day and busting their butts, doing the skills and drills, with no carrot to reach for because there are no games,” he said.

McNabb said that it is important to keep the process going, treating the practices as if they are preparing for games and working as hard as they can to keep the culture of Cobras football alive in Cochrane High.

“So these Grade 12’s have something to do, and show off so that they can get to the next level, but more importantly so that they can show the young kids and be mentors for the Grade 10’s,” he said. “The young kids are learning the new systems. I’m really impressed with the progress they’ve made in the last two weeks.”

The Cobras have won six consecutive provincial titles. Heading into the 2020 season, the team was ready to make their seventh run.

McNabb said that there is a disappointment evident in the players, but that experience is not limited to the football team.

“That’s all over this whole province. People are missing volleyball, they’re missing girls soccer, golf. I think there’s a disappointment in society. It seems to me that it’s the fun things that we have to be very careful with, you know, concerts, Stampeders,” he said. “We try to educate them on the realization that we have to be safe and we’ve got to handle our business here. If we want to stay in school we’ve got to do the right things.”

Despite that, he said that there’s no slowing down for Cobras football.

“If you kind of shut things down you’re really starting from scratch, and we don’t want to do that. The kids don’t want to do that either. They’re proud to wear that C on their helmet,” he said. “Some of the young kids, I talk to their parents, they come home and they say ‘oh my God, I’ve got a C on my helmet.’

“We’re trying to keep that at the forefront at Cochrane High,” he added.