Cochrane's golf courses are seeing a record-breaking year in terms of players on the course.
Aug 3, 2020 12:00 PM By: Tyler Klinkhammer 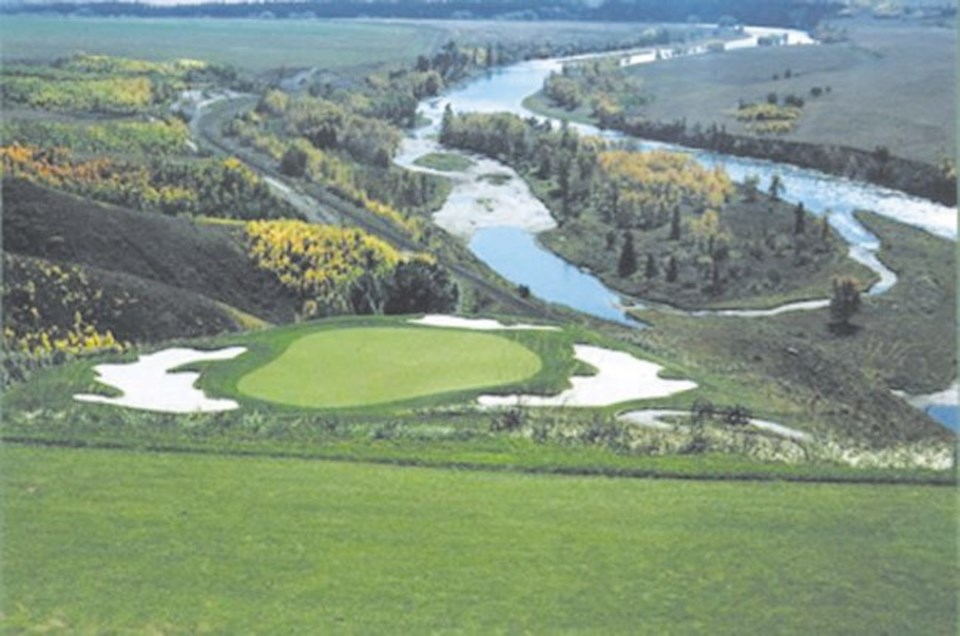 The view from the 16th hole at The Links of GlenEagles.

COCHRANE— Various sports leagues across the province have struggled this year to put together something resembling a season due to the COVID-19 restrictions in place.

There have been altered seasons, restrictions on activities and outright cancellations in many cases.

However, there is one sport that seems to be thriving during the COVID-19 pandemic— Golf.

Cochrane's golf courses have been seeing record-breaking numbers this year with regards to the number of golfers putting in rounds.

This year, Slade King, the general manager of the Links of Gleneagles, said the course has seen a huge uptick in people wanting to play golf.

“Golf is on a bit of a boom this year,” he said. “Gleneagles is in that 12 to 14 per cent up range this year, which is fantastic to see.”

On a typical year, a one to two percent jump in players would be considered a good jump, five per cent would qualify as a great year, King said.

King noted that they’ve seen all sorts show up to play this year, from young new players who are looking for replacements for the sports they were previously enrolled in, older folks who are trying the game for the first time and players returning to the sport after a long break.

King said that he thinks the cancellation of other sports, restrictions on travel and people wanting to stay active all contribute to the high traffic the course is seeing this year.

“I think there are a number of factors that all came together to make golf a really great choice if you want to go out and do something in the summertime,” he said. “Some of the team sports like softball and soccer were shut down for a period of time, golf kind of just checked a lot of boxes for a lot of people.”

On the other side, he said, retail sales are down, and banquets, weddings and tournaments have been cancelled or postponed this year.

There are also a lot of additional expenses that come along with operating under the circumstances of the COVID-19 pandemic.

Any of the high touch surfaces, like ball washers and benches, had to be removed from the course, Plexiglas barriers have been installed where they are necessary, staff must sterilize golf carts after each use and the labour costs involved with cleaning have gone up.

Despite those losses and additional expenses, Gleneagles is doing well this year, King said.

“We’re at a point where we're in a positive position. We’ve got enough golfers to make up for any loss of revenue, so we’re definitely having a good season this year,” he said.

The Cochrane Golf Club is in much the same position, according to operations manager Brad Walz.

Walz cited the cancellation of other events and activities as the reason for the increase.

"It's quite exciting," Walz said. He noted that the last time he saw this much traffic on the course was in the late 80s when corporate business was booming.

In July Cochrane Golf Club has seen about 7,500 rounds of golf played. Last July that figure was closer to 5,000.

The Cochrane Golf Club is already within 3,000 rounds of golf played compared to last year's total before Aug. 1.

"We're averaging about 240 golfers a day. So that's pretty good. It's not a sell-out, but you've got weather in there too. Anytime you've got storms in the area you lose your play," Walz said.

The Cochrane Golf Club did not open up until May, but the high volume has made up for the late start "100 per cent and beyond," Walz noted.

King said that for those who are looking for an activity to fill a void left by a cancelled season or postponed travel plans golf might be a great alternative activity.

“You just have to pick up the phone and book a tee time and you can play golf tomorrow,” he said. “You can come take a lesson, or borrow a set of clubs to start and hit the ball around and see how you like it and go from there. It’s a really low barrier to entry for the game.”