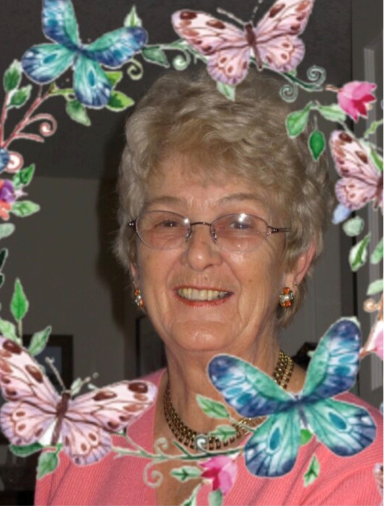 We are saddened to announce Winnie’s passing after a very trying transition time from independence to extended care. She was admitted to a home just a day before the covid lockdown and was not able to be visited until her hospitalization just days before her passing.

Winnie was born in West Dalhousie, Nova Scotia and later moved to Bridgetown where she shared a home with her 3 sisters, Marie, Kathy, and Myrna. Growing up, Winnie enjoyed playing basketball and going on double dates with her sister Kathy. Later, Winnie followed her sister Kathy to Calgary, Alberta where she found a job at an oil and gas company meeting her husband Lorry. She and Lorry went on to have 5 children, Bev, Darcy, David, Danny and Kathy. Living in University Heights until 1972. They then moved to a home built for them on 20 acres in Bearspaw where she managed the family in raising cows, chickens, pigs, horses, turkeys and even a stint with chinchillas. She was also proud of her volunteer position with the RCMP Victim Services and hosting show homes in Cochrane. After the last child had left the house, they subdivided the property and built her dream home on one of the parcels, where they lived until shortly before Lorry’s death in 2002. Then, living in a lovely condo in Countryhills, Calgary, she made new friends where she was teasingly known as “The Pancake Lady” because of her ability to run the pancake breakfast crews. She also enjoyed Bingo and the hugs she would get from her friends there. In the last couple of years she amazed the medical community with her quick recovery from a broken hip and a second fall breaking her elbow, all without any medications! She was admitted to the Rockyview Hospital where she was shockingly diagnosed with advanced lung cancer and mere days later, succumbed to her illness.

She will be sadly missed and fondly remembered by many friends and family including her 11 grandchildren and 3 great grandchildren.

No formal ceremony will be had as per her wishes (and covid restrictions). We will be taking her to Belle Isle, Nova Scotia, where she will be buried beside her husband Lorry and her Mother, Hilda and Father, Arthur Shipp.

In lieu of flowers we would ask a charitable donation to an important cancer fund of your choice.