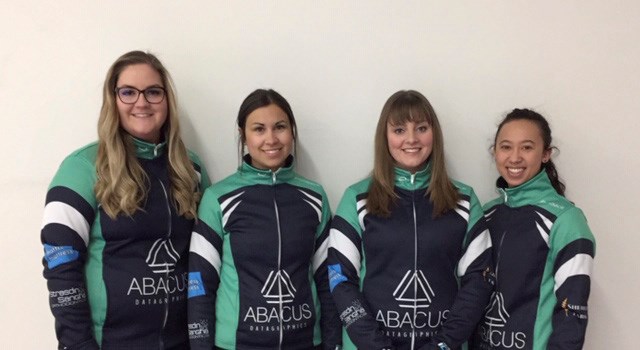 The pressure of playdowns brought the best out of a rink fast becoming a fixture at the Alberta Scotties.

“The ice was kind of tricky at Jasper Place,” said skip Marla Sherrer. “And I think between the four of us we were able catch on to it quickly and make the adjustments we needed to. We actually all curled very well, probably one of our best weekends of the year.

“We just all came together that weekend.”

This marks the third straight Alberta Scotties qualification for Team Sherrer, based out of the Lacombe Curling Club.

“It’s been really cool,” the skip added. “All of us have just curled in juniors mostly and the women’s game is a lot different. It’s really exciting to go to provincials and there being a big crowd in an arena.

“It’s a little more pressure, but I think we all like it.”

Team Sherrer — with Sherrer throwing last stones, Janais DeJong at third, Julie Selvais at second, Brenna Bilassy at lead and Rebecca Boorse at alternate — has enjoyed a strong season in spite of some obstacles along the way.

Season highlights include their championship at the Avonair Cash Spiel in October along with a third place showing at the Cora Breakfast and Lunch Grande Prairie Cash Spiel.

“We’ve had some different players,” Sherrer said. “Our lead (Adrienne Winfield) who played third with us last year had a baby in September so she was going to come back and play lead and then she decided to stay home a little longer with her baby.

“Then we had to refill our lead a position a bit, it’s kind of been interesting.”

There’s a proven track record on the squad.

Bilassy is the 2017 Canadian junior champion as the lead for Kristen Streifel and captured bronze at the World Championships in South Korea.

“It’s kind of cool that we can all be together now,” Sherrer said.

Sherrer said the squad will take part in a couple practices, team meetings and league games to get geared up for the provincial competition.

“Every game will be really tough games,” she said. “They actually narrowed the field a bit from 12 teams to 8 teams and there are a lot of really good teams that qualified this year.

“We’ve definitely got our work cut out for us.”

For the latest on the Scotties go to https://www.okotokstoday.ca/2020-alberta-scotties