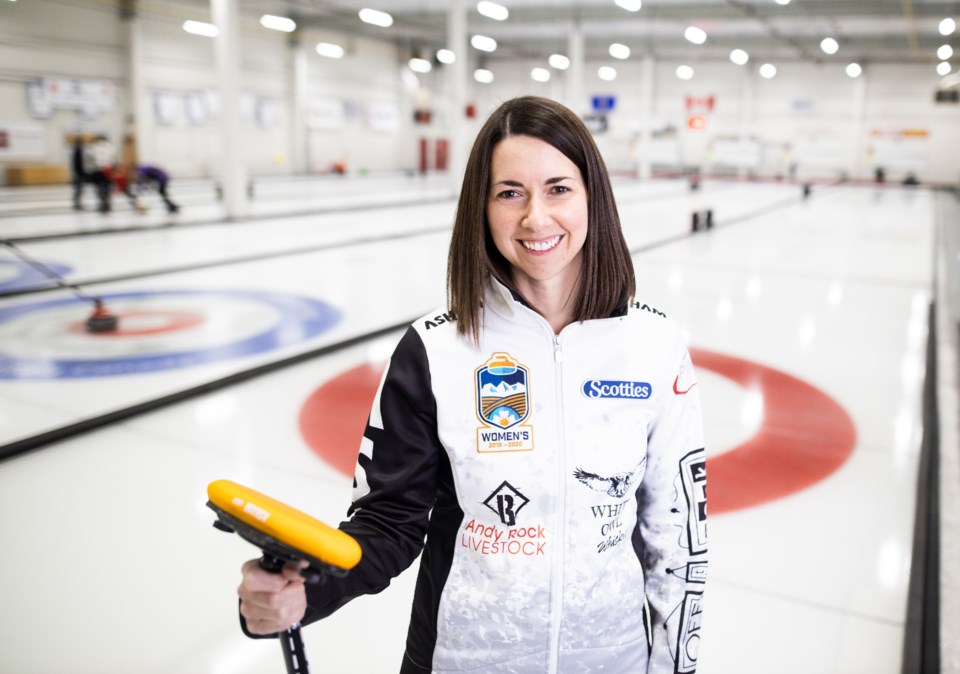 Val Ekelund, lead for Team Vaughan, poses for a portrait at the Okotoks Curling Club on Jan. 15. (Brent Calver/Western Wheel)

Okotokian Val Ekelund, the lead for the Jodi Vaughan rink, gets to compete for provincial glory in her hometown when the 2020 Sentinel Storage Alberta Scotties Tournament of Hearts roars into the Murray Arena, from Jan. 22-26.

“It will be great because we’ll have my parents and some local fans and people that can come to the games without having to travel too far,” said Ekelund, who moved to the Okotoks area over two years ago. “And it will be really nice to be close to home and feel comfortable because I’m in that club all the time so it will be nice to be just next door in the arena.”

Ekelund practices regularly out of the Okotoks Curling Club and is also on the organizing committee for the Alberta Scotties headed up by co-chairs Atina Ford Johnston and Mike Libbus.

“It was nice to be on the committee a bit and because we’re kind of new to the area it helped me meet a few more people in the curling community,” she said. “And get a little more familiar with the other events that were going on and everything that was happening’ at the club.

“That was really nice for Atina and Mike to let me participate.”

Team Vaughan has been a fixture at the Alberta Scotties. The skip has competed in 8 of the last 10 provincials, including four straight throwing last stones.

“Every year is just huge going back,” said Vaughan, who curls out of Lethbridge. “You become a little more familiar with things and know a little bit what to expect going into the event.

“This year I’m happy to be back playing a round-robin, that’s something that will be a little bit different rather than the triple-knockout."

The 2019 Scotties in Stettler saw the Vaughan rink make it to the semifinal round and for the first time played on television, an experience they can no doubt build on one year later.

“That will be really good for us, we went into that event with no expectations,” Ekelund said. “You can’t go expecting to run the table or win, you’re kind of underdogs from that perspective so you can go in and go with it and enjoy the experience, they put on such a great show in Stettler that we were able to just enjoy every game.

“I think we can carry that perspective into this year and if we get into a similar pressure situation, like the semifinal last year, we should be able to build off that experience and be able to come out a little more prepared.”

In its current incarnation with Vaughan, third Jody McNabb, second Nicole Larson and Ekelund, the foursome has been together for three years – the type of longevity rarely seen in the roaring game.

“That makes a huge difference for us at the beginning of the year,” Vaughan said. “We all know each other, we don’t have to work out those little kinks that you would have to as a new team. There’s just a lot of comfort out on the ice.”

Team Vaughan finished 5-1 at the Alberta Scotties qualifier in Calgary in December, bouncing back from a loss to Okotoks’ Sheena Engel in the first draw and rallying for five straight wins, including the 7-4 clincher over the Ryleigh Bakker rink.

“It was double-knockout which means you have two lives and we like to take the hard route lots of the time,” said Vaughan. “We had to win five in a row and after that first game we just rattled off a lot of good wins, we improved our play, learned the ice a bit better and really stuck together as a team.

“And we had to steal in both nine and ten to win the final qualifying spot there.”

Ekelund characterized the 2019-20 season as front-loaded with the latter half spent largely on sharpening those fine details in the game.

“We’ve had one event, one in December and one in January so we’ve spent a lot of time the last end of the season just practising and cleaning up some of the stuff from the beginning,” Ekelund said. “We were pretty consistent, we didn’t qualify maybe as many times as we wanted in the early ‘spiels, but we had lots of good games, everything was really close, it’s always just which side of the inch you’re on.

“Just hoping that going into this week we can end up on the right side of the inch more often than not and see where it takes us.”

All eight teams open the round-robin portion of the Scotties on Jan. 22 at the Murray Arena with two draws on the first day of action. The top four teams from round-robin advance to the four-team page playoff on Jan. 25-26.

“We want to be back playing on the weekend, that’s our goal,” Vaughan added. “We proved we could do it last year and showed something to ourselves and that’s what brought us all back this year is really having come close and having that taste and knowing we can get back there.

“It will be a tough field and you have to take each game each rock at a time.”

For further Alberta Scotties stories and coverage during the event go to https://www.okotokstoday.ca/2020-alberta-scotties