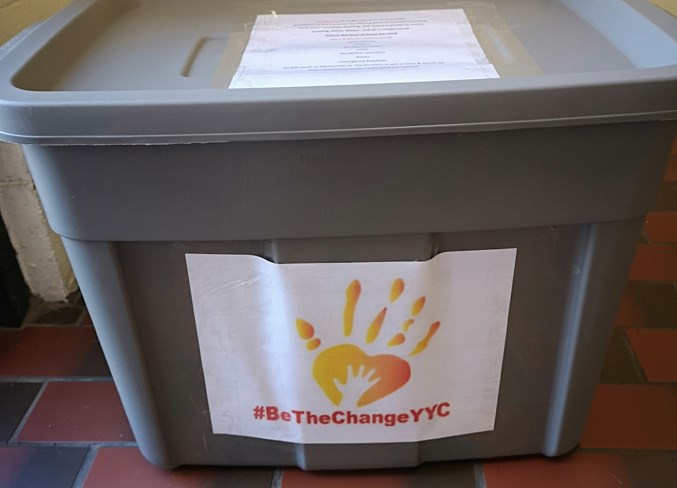 #BeTheChangeyyc has a donation bin at Cochrane Heath and Fitness and is currently accepting winter wear donations.

It's more than just a tagline for the grassroots non-profit that walks the streets each week, providing food, water and other tools to help Calgary's homeless and those battling addiction – it's a formula for putting the humanity back into charity.

Founded by former Cochranite Chaz Smith in 2015, #BeTheChangeyyc has grown from helping roughly a dozen homeless people each week to 150 to 200 every Wednesday when volunteers walk the downtown streets and hand out tangible items including clothes, food, bottled water, toiletries and even sleeping mats made from crocheted plastic bags.

#BeTheChangeyyc has no government affiliation and is completely volunteer-run. They are the only organization of its kind to walk the downtown streets of Calgary weekly handing out supplies and fostering relationships.

For Smith, who credits the organization's rapid success to his army of volunteers and the generosity of partnering donors and individuals, it's not just about the weekly help – it's about building community, trust and connecting those facing addiction, isolation or financial barriers a plan to push past homelessness.

"Sometimes hope starts with a meal ... what we're doing is building community and building relationships," said Smith. "People do get better – it happens all the time."

Smith was among the ones who got better. A youth attending high school in Cochrane some 15 years ago, being "the gay kid" left him open to ridicule and serious bullying. Combined with a tumultuous home life, Smith experienced homelessness for a period of time – leaving that chapter of his life behind when he forged out a community and positive relationships that would lead him to launch be #BeTheChangeyyc.

While Smith said that it's a misconception that most homeless individuals are drug users, he did acknowledge the Fentanyl epidemic taking place on the streets.

"I think drugs are the problem right now, especially this year. It was evident we had a Fentanyl crisis going on," he said, adding that even though statistics show a slight decline in homelessness, the number of people he and volunteers are helping on the streets has risen due to the Fentanyl epidemic.

While some users are not necessarily homeless by definition, there are many left sleeping outside in encampments while under the influence – as they cannot be admitted to detox facilities or shelters while exhibiting psychotic symptoms.

Smith said, in recent months, he and his team are finding a spike in meth use again and that meth users are sometimes adults who were treated for ADD or ADHD as children – when medications formerly used to treat these disorders contained some of the chemicals used to make meth, such as Dexedrine.

Smith said the organization also focuses on connecting clients to shelters, detox centres and other resources that will help end the cycle of homelessness. Volunteers also take training in conflict resolution and undergo background checks.

The ultimate goal of #BeTheChangeyyc is to open up an outreach centre that would provide a safe space for homeless to shower, get computer access and do laundry – to help reduce the stigma they face by trying to use the resources at other facilities.

Elena Will, the Cochrane donation co-ordinator, is hopeful the generosity of Cochranites will find motivate people to donate items to the cause. She has a donation bin at Cochrane Health and Fitness, which she collects and delivers to the organization's sorting location in southeast Calgary.

Wills, a married mother of two, is among those impacted by the economic downturn as her husband was laid off. She and her family were among the many who turned to the Cochrane Activettes and their hamper program to get them through.

"I don't think we would have gotten by without it ... with two little kids it's really scary. We've struggled a lot," she said, adding that she fell in love with the organization after meeting Smith at an event and was happy to take on the role of point of contact for Cochrane.

#BeTheChangeyyc is currently looking for winter gear to hand out on their winter walks – tuques, mitts, jackets.