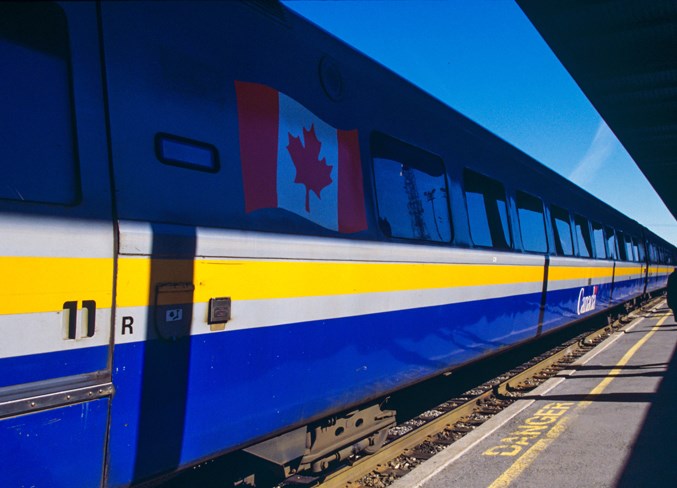 The Bow Valley corridor may have reason to celebrate a revolution in traffic and tourism in the coming weeks. Cochrane Mayor Jeff Genung, Banff Mayor Karen Sorensen and Canmore Mayor John Borrowman have been working to back a plan for a potential commuter train that would look to travel tourists and commuters alike via rail from Calgary to Banff – with stops in Cochrane, Morley and Canmore in between. “It would revolutionize traffic in the Bow Valley corridor ... just imagine the tourism spin-off alone,” said Genung, who anticipates more details in the coming weeks. The trio of mayors have been talking about the railway and are looking to lobby for government funding and support. Details including who owns it, who builds it, stop locations (including airport possibilities) are yet to come. Genung said the forward-thinking project is an example of connecting communities along the corridor, while improving commuter traffic flows. Morley chiefs met with town officials, including Genung, last week for a luncheon that the mayor hopes will be a sign of more to come. Genung said Chief Ernest Wesley and Chiniki Chief Aaron Young are both excited about the opportunities for the Morley community a commuter rail project would bring. Genung explained that rail talks with the two mayors motivated him to attend the NDP fundraiser in Canmore last week. He emphasized that his intention was not to support any political party, only to get face time with the other politicians in the region, as well as Premier Rachel Notley – who he spent time with that evening, discussing the town’s hopes for funding next spring for the interchange project at highways 1A/22 to help alleviate Cochrane’s congestion problems. AUMA Mayor and most of council, with the exception of Coun. Morgan Nagel, attended the annual Alberta Urban Municipalities Association conference in Red Deer Sept. 25-27. Genung said, to date, several in-person meetings with ministers and officials have been confirmed – including Minister Brian Mason of Transportation, Minister Irfan Sabir of Community and Social Services, Minister Sarah Hoffman of Health (also deputy premier) and senior officials from the Ministry of Seniors and Housing. Hot topics Genung said will serve as talking points including seniors housing (a new home for Big Hill Lodge, which held a fundraising dinner last weekend); the intersection at highways 1A/22 and the 1A corridor; EMS and ambulance services and wait times; and advocacy for 24-hour urgent care services in Cochrane. Coun. Tara McFadden is also hoping for a win tomorrow morning as she campaigns to be Director Towns South for AUMA – which includes all municipalities south of Olds to the border. McFadden, who is running against incumbent Coun. Tanya Thorn of Okotoks, is looking for regional networking to find solutions to common thread issues like infrastructure needs, sustainable funding and how to deal with cannabis legalization and is hopeful to be a voice at the table to better represent the challenges faced by Cochrane as a growing municipality.