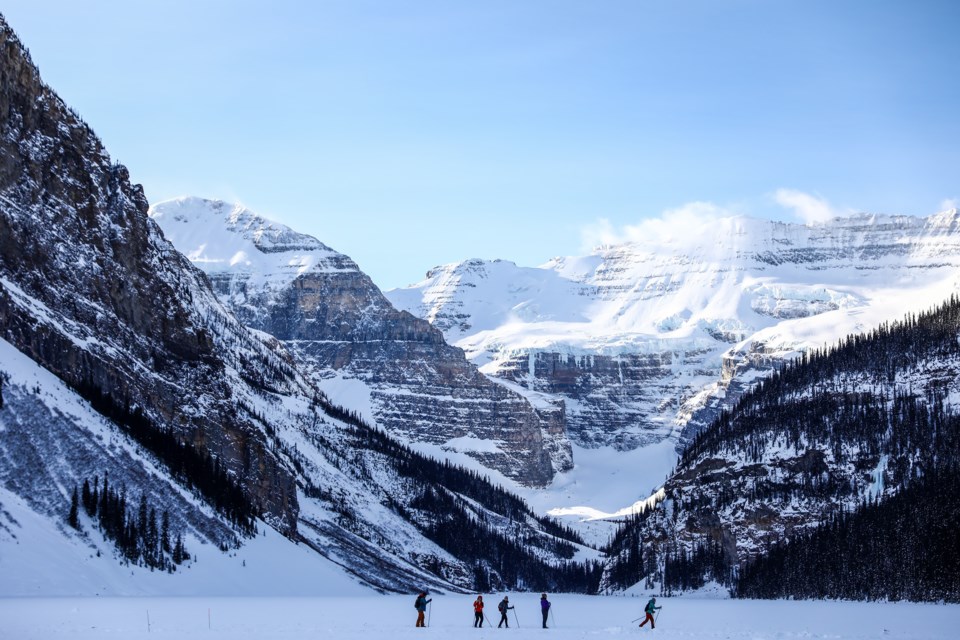 LAKE LOUISE – A Canmore man died after an avalanche swept him 600 metres over cliffs on the extreme north-east face of Haddo Peak on Monday morning (April 5).

Two experienced local skiers set out ski touring early in the morning on the 3,070-metre peak near Lake Louise when a a size 2 slab avalanche was triggered at an elevation of about 2,950 metres shortly before 9 a.m.. The avalanche ran about 40 metres wide with a fracture line of 40 to 60 cms deep.

Rescuers say both Canmore men were caught in the slide; one managed to escape and survive, while the other was swept over a long series of cliffs where he was found dead.

“He was swept for about 600 metres down the side of the mountain and unfortunately was killed,” said Grant Statham,  a Parks Canada visitor safety specialist.

“The other one was able to do a heroic job of searching for their friend; they had to descend some very difficult terrain under pressure.”

The name of the man who died has not been released by RCMP or Parks Canada, but he has been identified as Spencer Postman, 26, on Facebook .

Three off-duty guides with the Association of Canadian Mountain Guides (ACMG) who were touring to Surprise Pass witnessed the avalanche.

“They were able to go down and assist; they called us on the radio,” Statham said.

The Parks Canada rescue team was quick to the scene, staging out of the Upper Lake Louise parking lot.

STARS air ambulance was initially called, but later was asked to stand down.

Both men were experienced skiers and were carrying all the necessary safety equipment for being in the extreme terrain.

“They were very skilled people and they were experienced,” Statham said.

“As far as I can tell, they did everything right, they left very early this morning, to try and capture the cold air.”

The avalanche conditions were listed as moderate, which means human-triggered avalanches are possible.

The avalanche released on an east facing, shallow snowpack area and appears to have failed near the ground on either a sun crust, or on basal facets.

At this time of year, Statham said it is important for backcountry users to pay close attention to the which direction the terrain faces – east versus north – to understand how the sun may affect the snow pack.

“What’s challenging at this time of year is the sun has so much punch to it. That whole area is north facing so it’s cold, but right at the top where the avalanche happened, the slope turns and faces east,” he added.

“They would have climbed up the slope in the cold and then turned and ended up on the east facing slope, which was impacted by the sun and that’s where the avalanche happened.”

Tuesday’s avalanche conditions are expected to be a carbon copy of Monday’s, though the temperature is forecast to be slightly warmer.

“In certain places you’re going to trigger an avalanche when there’s a moderate danger,” Statham said.

Parks Canada encourages visitors to consult the Avalanche Forecast diligently at www.avalanche.ca and to understand how snow may impact snow pack and conditions.