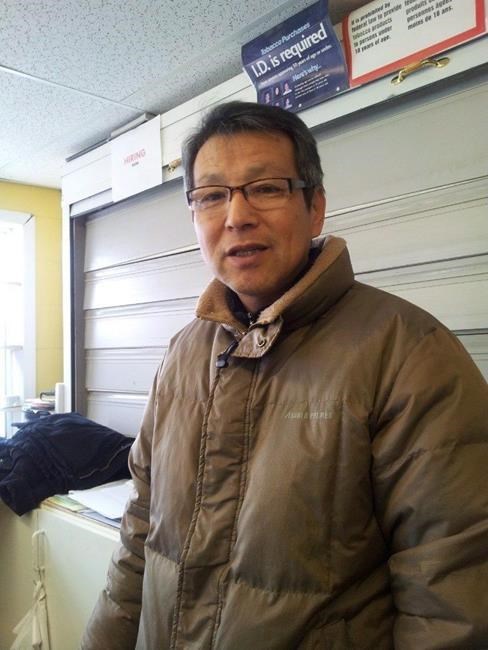 Ki Yun Jo, the victim of a gas-and-dash robbery, is shown in an Alberta RCMP handout photo. THE CANADIAN PRESS/HO-RCMP

WETASKIWIN, Alta. — A man who was charged after an Alberta gas station owner was killed in a gas-and-dash apologized to the victim's distraught family after pleading guilty to manslaughter.

Mitchell Robert Sydlowski was charged with second-degree murder, but the 29-year old pleaded guilty to the lesser offence Friday during an online hearing at the Court of Queen's Bench in Wetaskiwin.

An agreed statement of facts submitted in the case said Sydlowski killed Jo when he sped off in a stolen cube van without paying for $198 of fuel.

"The victim observed that the accused was going to leave without paying and went outside to confront him," said Crown prosecutor Vince Pingitore, reading from the statement. "As the accused drove away with the van, the victim grabbed the passenger side mirror."

He said Sydlowski fled the Fas Gas with Jo clinging on to the mirror and drove for about two blocks, before the vehicle swerved and Jo was tossed to the ground and run over by the van.

Sydlowski, who is from Spruce Grove, Alta., also pleaded guilty to failing to remain at the scene of a fatal accident.

Pingitore recommended a sentence of six to eight years, while Sydlowski's defence lawyer, Kent Teskey, suggested it should be at the lower end of the Crown's recommendation because of the guilty pleas.

Sydlowski told court that he accepts responsibility for Jo's death and apologized to the man's family as they watched the online hearing.

"I am so sorry for the pain I have caused your family," he said, reading from a prepared letter. "I did not intend for any of this to happen."

He said he's using his time in prison to become a better person and to get help for his addictions.

"I am so sorry for your loss," said Sydlowski.

In a victim impact statement read by the Crown, Jo's daughter said he was "the most loving person in the world" and a man who always took care of his family.

"My life was simple and happy ... and then I had the worst day of my life," said Ka Yung Jo. "My dad was senselessly and cruelly taken away from me.

"Since then, my world has changed completely."

She said she hasn't been able to stop seeing her dad dead on the road.

She said that she, her mom and her brother had to take over the gas station and had a difficult time running the business. They ended up selling it and moving away from the town.

Her mom and her brother have also struggled, she said. Her dad's death left her family financially unstable and heartbroken. It also made her angry.

"What I hated most was the man who ended my dad's life," she said.

"He killed my father and ruined me, my life, my family and everything."

Shortly after Jo’s death, the Alberta government moved to bring in legislation requiring drivers to prepay before filling up at gas stations.

Ka Yung Jo said she hopes the law saves the lives of other retail workers.

"Alberta law has shown a strong will of improvement after my father's death."

She said she hopes the court case becomes an example of how the justice system can work.

"This sentence will not certainly bring my father back to us, but there is a hope it will keep our world safer."

This report by The Canadian Press was first published on Aug. 14, 2020

— By Colette Derworiz in Edmonton.