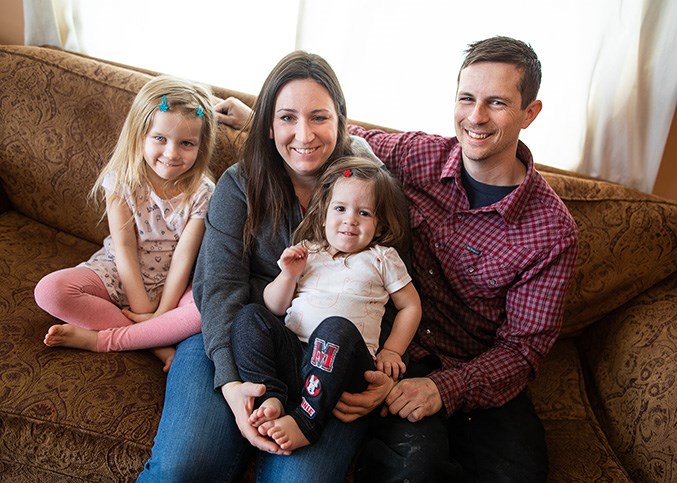 Edouard Maurice, his wife Jessica, and two daughters Delilah and Teal at their home last year. A $100,000 suit against the family by Ryan Randy Watson was dismissed in court and the Maurice family dropped its $150,000 counterclaim on Jan. 16. (Brent Calver/WesternWheel.ca)

Eddie and Jessica Maurice and their two daughters can focus on other issues now that a $100,000 lawsuit filed against Eddie by a man who committed a crime on the family’s property was dismissed in Court of Queen’s Bench on Jan. 16.

“We are really looking forward to a trip to Disneyland with our kids — we have been putting that off due to all of the court drama and everything that has been happening,” Jessica said. “That will be the next big thing we will put our energy towards.”

On Feb. 24, 2018, Ryan Randy Watson and a co-accused drove onto the Maurice property south of Okotoks at around 5:40 a.m. and rummaged through the Maurices’ vehicles. Maurice, who was home with his one-year-old daughter, gave a verbal warning and then fired a warning shot into the ground, which ricocheted and struck Watson in the wrist.

Maurice was charged with gun offences and his court appearances received national attention with hundreds of people supporting his right to defend his home.

All charges against Maurice were dropped.

Watson later pleaded guilty to mischief and failure to comply with a court order at Okotoks provincial court on Feb. 28, 2019. He was sentenced to 45 days in custody, but was released after receiving credit for time served.

Watson filed a lawsuit against Maurice for $100,000 in September for personal damages. Maurice then filed a counterclaim of $150,000.

After the Jan.16 decision, the Maurices decided to walk away from the countersuit to put the matter behind them once and for all.

It’s been a long battle for the Maurices, who vowed to fight for their rights from the get-go on Feb. 24, 2018.

“We wouldn’t have been able to do this without the support of our family and our community.”

It was a clear win, according to Maurice’s lawyer Scott Chimuk.

“What happened in court today is we won,” Chimuk said. “The allegations against Mr. Maurice that were brought by Mr. Nelson (Stephen Nelson, Watson’s lawyer) were dropped. There is no civil suit, there is no lawsuit – it is over.”

He said the suit against Maurice should never have been filed.

“This case should not ever have been brought in the first instance — in my view it is absolutely outrageous,” Chimuk said. “The fact a private citizen, who is defending his family and their home, was sued by a convicted criminal with respect to injuries that criminal allegedly incurred is absolutely outrageous and affront to justice and I am glad that justice was done today.”

Chimuk said while he was confident his client was not ever going to lose the suit filed by Watson, the passing of Bill 27 expedited the matter.

Bill 27, the Trespass Statutes (Protecting Law-abiding Property Owners) bill was passed in the Alberta Legislature on Dec. 5. One of the stipulations of the bill is a victim of crimes, who takes reasonable, legal actions to protect their property, cannot be sued by those committing the crime.

“The advantage of Bill 27 was it allowed us to bring a summary application to get rid of this sooner than later,” Chimuk said. “I am fully confident that this was a vexatious and frivolous lawsuit.

“We would have won in any event. But without Bill 27, it probably would taken us much longer to win and it would have put the Maurice family though an arduous process.”

Eddie said he was relieved it was over.

“It’s been a very long two-year process for us as a family, it affected our kids, finally we can just move on,” Eddie said. “We can move forward.”

Following is the timeline of the Eddie Maurice case:

Cochrane doctor concerned about future of medicine in Alberta
Sep 19, 2020 8:30 AM