Tristan Ryan’s parole has been revoked after using marijuana, making cheating accusations against his wife online and striking up an online relationship without informing his parole officer
0
Nov 30, 2019 8:45 AM By: Darlene Casten 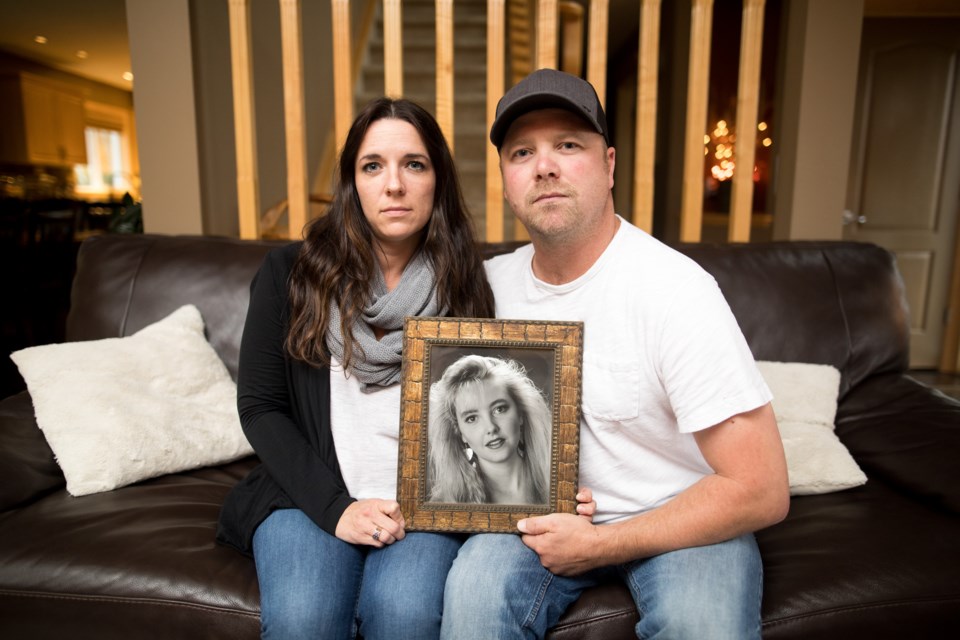 Rene and Robin Spooner with a photo of Rene's sister Stephanie, who was murdered by ex-boyfriend Tristan Ryan in 1991. The Spooner family is relieved Ryan is back behind bars after parole violations. (Brent Calver/Western Wheel)
Using marijuana, making cheating accusations against his wife online and striking up an online relationship without informing his parole officer has resulted in convicted killer Tristan Ryan’s parole being revoked, sending him back to prison.

On Nov. 28, a parole board member upheld the decision by Ryan’s parole officers to issue a suspend his parole and said his “risk has risen beyond the level of manageability.” His parole revocation will be reviewed again in a year.

Ryan, who was born Bradley Paetsch, brutally stabbed his on and off again girlfriend, 16-year-old Stephanie Spooner in her Okotoks home on Jan 23, 1991 and was sentenced to life in prison with parole eligibility after 25 years. Ryan was escorted temporary absences to work prior to 2010.

While working he met a women, but did not report the relationship to his parole officer, resulting in him being moved from minimum to medium security prison. Ryan and the woman were married and he was again granted escorted, and then unescorted absences, leading to day parole and in October 2018 full parole.

However, in September he was arrested and placed back in prison.

Robin read from a statement describing the ongoing pain of the Spooner family and the fears they had when they found out a warrant had been issued for Ryan and he wasn’t arrested until three days later.

“I ask(ed) corrections, do I need to be worried for our safety?,” she said. “They inform me to contact my local RCMP and make them aware… Once again where is the protection for the victims?”

Val is from the lower Mainland in B.C. and has been to all of Ryan’s parole hearings. She said she will be back in a year for his revocation review.

“I continue to go because I owe it to Stephanie,” Val said. “She was my niece and my godchild. I think it is important to let the parole board know a person who was stolen from a family’s lives and that they are still important.”

The parole board member heard RCMP raided Ryan’s home over suspected child pornography, but laid no charges. That led to difficulties in his marriage and Ryan eventually going to live on his own. While separated from his wife, Ryan put a post on Facebook accusing her of cheating and admitted to his parole officer he smoked a joint with a co-worker.

His wife also reported feeling unsafe when Ryan texted her in the middle of the night when a no-contact order was in place, but later she said she realized the texts were sent months earlier and said it was likely a phone glitch.

Those concerns led to Ryan’s community parole officer issuing a warrant for his arrest.

The parole board member overseeing the hearing said his accusations against his current wife were particularly concerning because it had been jealousy over suspected cheating that had caused him to murder Spooner and said Ryan did not recognize high risk situations.

His wife told the board she was willing to work on their relationship, but wasn’t sure they’d stay together.

The board also heard Ryan got in a fight with other inmates since his arrest. Ryan said he was put into a gang unit, where he was labeled a rat and had his life threatened and had gotten into the fight when some of the gang members had cornered him.

While separated from his wife, Ryan struck up what he characterized as a friendship with a woman online, but said it ended when she started asking for money. Ryan did not tell his parole officer about the relationship, a violation of his parole conditions.

“He’s exhibiting the same behaviours,” she said. “He had a no-contact order with his wife and he violated it and that is the same thing he did with Stephanie. There is a pattern. I’m very happy they finally see and are recognizing he is high-risk.”