"No more bans on indoor social gatherings. No more limits for gyms, sports, and fitness activities. No more capacity limits at restaurants, in retail or for places of worship. No more advisories against non-essential travel."
Jun 18, 2021 5:15 PM By: Canadian Press 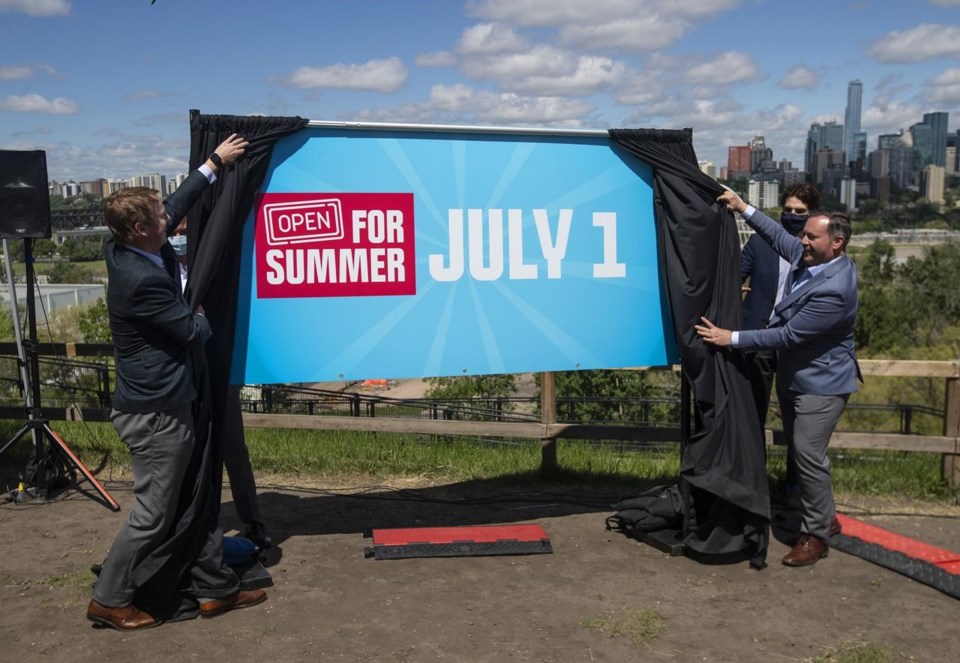 Alberta Health Minister Tyler Shandro and Alberta Premier Jason Kenney unveil an opening sign after speaking about the Open for Summer Plan and next steps in the COVID-19 vaccine rollout, in Edmonton today. Kenney announced that the province had reached the vaccination threshold for the third and final phase of reopening, because 70.2 per cent of Albertans 12 and over had received at least one dose of a vaccine. THE CANADIAN PRESS/Jason Franson

EDMONTON — Alberta will become the first province or territory to remove all COVID-19 restrictions when it lifts its remaining public health measures on July 1.

Premier Jason Kenney announced Friday that the province had reached the vaccination threshold for the third and final phase of reopening, because 70.2 per cent of Albertans 12 and over had received at least one dose of a vaccine.

That means it's safe to return to normal after the vaccines take full effect in two weeks, he said.

"The end of this terrible time is just two weeks away. I know it’s hard to believe, but it's true," Kenney said.

"Thanks to vaccines and the millions of Albertans who have been protected by them, we finally have the upper hand on this virus and can safely open up our province."

Other provinces have announced plans to end restrictions in the coming weeks.

Alberta has already reopened most of its community and business activities, most at reduced capacity. On July 1, even those limits will be gone.

"No more limits on weddings or funerals," said Kenney.

"No more bans on indoor social gatherings. No more limits for gyms, sports, and fitness activities. No more capacity limits at restaurants, in retail or for places of worship. No more advisories against non-essential travel."

Those with confirmed cases of COVID-19 will still have to isolate and protective measures at continuing care centres may remain.

The overall requirement for masks in public indoor spaces will end, but masking might still be required in specific settings.

Alberta has administered about 3.6 million vaccine doses and one-quarter of those eligible have had the required two shots.

Kenney and Health Minister Tyler Shandro said vaccines are the way out of the pandemic and the path to keeping COVID-19 at bay.

To that end, Shandro announced the province is taking advantage of increasing supplies to accelerate the timeline for second shots.

Anyone 12 and older who received a first dose in May can now book a second shot. People who have been vaccinated this month can book a second appointment as long as it's four weeks after the first.

Shandro recommended waiting eight weeks between shots for those who received a first dose of Oxford-AstraZeneca. He said studies show that time lag increases that vaccine's effectiveness.

Kenney also responded to an announcement Friday by the federal government that travel restrictions at the Canada-U. S. border will remain in place for at least another month until July 21.

Kenney said while he and other premiers had pushed for a faster border reopening, he acknowledged "it’s critical that we obviously take necessary precautions to prevent new cases and new variants from coming into the country."

The ban means there will be no foreign visitors at the Calgary Stampede when it begins July 9. The world-renowned rodeo and fair is going ahead with fewer events, no chuckwagon races and with reduced capacity rules.

Kenney said the Stampede was not expecting a lot of outside visitors.

"I think their projection is 90 per cent of visitors to Stampede will be Albertans, given the uncertainty around travel," he said.

Some doctors have warned more second doses need to be given in the province to be better protected against the Delta variant first identified in India.

The variant is more transmissible and is spreading quickly in the United Kingdom, where some reopening measures have been delayed.

Two patients in their 80s with underlying health issues died recently after contracting the variant during an outbreak at the Foothills hospital in Calgary. One had been fully vaccinated.

Kenney said the variant bears watching, but has been circulating in Alberta for nine weeks and still represents less than 10 per cent of 2,471 active cases. He said data suggests even one vaccine shot provides 90 per cent protection or better against serious consequences requiring hospitalization.

This report by The Canadian Press was first published on June 18, 2021.