Pfizer shot approved for kids 12 and up, Alberta to offer vaccine to children

Alberta Premier Jason Kenney was the first to announce that starting on Monday, his hard-hit province would make vaccines available to everyone aged 12 and up.
May 5, 2021 1:15 PM By: Canadian Press 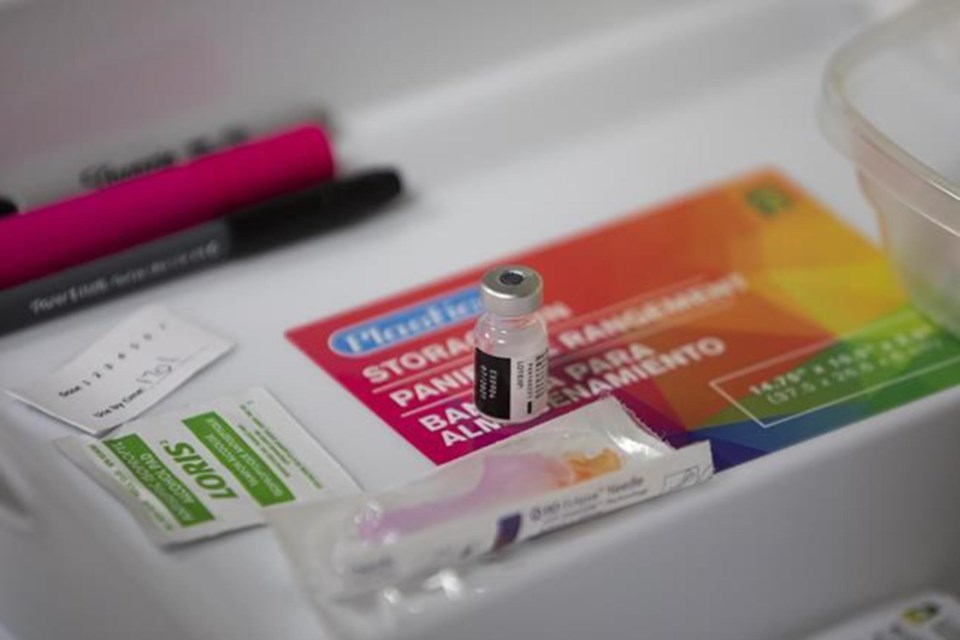 The Pfizer-BioNTech vaccine stands in a tray before use at the Saskatoon Tribal Council run vaccination clinic inside SaskTel centre in Saskatoon, Sask., on Thursday, April 15, 2021. THE CANADIAN PRESS/Kayle Neis

Health Canada approved the Pfizer-BioNTech vaccine for children 12 and up on Wednesday, prompting Alberta to announce it would offer the shot to kids in that age bracket as the province combats a surge in COVID-19 cases.

The vaccine announcement comes after a promising trial out of the United States, which Health Canada's chief medical adviser said shows the vaccine is both safe and effective for kids in that age group.

"It will also support the return to a more normal life for our children, who have had such a hard time over the past year," said Dr. Supriya Sharma, Health Canada's chief medical adviser.

The shot had previously only been approved for those aged 16 and up.

The American trial of more than 2,200 youth between the ages of 12 and 15, which used the same size doses and two-dose requirement as the vaccine for adults, recorded no cases of COVID-19 among vaccinated kids.

Sharma said about a fifth of all COVID-19 cases in Canada have occurred in kids and teens.

Alberta Premier Jason Kenney was the first to announce that starting on Monday, his hard-hit province would make vaccines available to everyone aged 12 and up.

Those born in 1991 and earlier can start booking their vaccines on Friday, while those born between 1992 and 2009 can make an appointment starting Monday.

The news comes the day after high COVID-19 transmission rates forced the closure of schools in Alberta.

Kenney made a dinnertime announcement Tuesday saying that students would move to online learning starting Friday. The measure is set to last for two weeks.

Thousands of students in higher grades in Edmonton and Calgary have already been learning from home.

"I know this is a real disruption for both kids and parents, but with the current level of community spread, we have 80,000 staff who are in self-isolation, and we'll soon reach a point where many schools will not be able to operate," Kenney said.

Meanwhile, public health officials and politicians alike were working to reassure Canadians about the safety of the Oxford-AstraZeneca vaccine after the National Advisory Committee on Immunization urged those who were not at high risk of COVID-19 infection or complications to wait for another shot.

But some officials said Canadians should not follow that advice.

"You know, what I say is that if your life is in danger, and you need to call 911, to get help to save your life, it does not matter if that call is made on an iPhone or a Samsung or even a flip phone," said Sharma, the Health Canada adviser. "It does what it is supposed to do."

New Brunswick health officials reported the province's first death of someone who developed a blood clot after receiving the Oxford-AstraZeneca vaccine on Wednesday, just hours after Alberta did the same.

"It is important to remember that the risks of dying or suffering other severe outcomes from COVID-19 remain far greater than the risk following AstraZeneca vaccine," said Dr. Deena Hinshaw, Alberta's chief medical officer of health.

Meanwhile, the federal government announced that Canada is sending desperately needed medical supplies to India as the COVID-19 pandemic in that country spirals out of control.

Global Affairs Canada said Ottawa is shipping up to 25,000 vials of the antiviral drug remdesivir and as many as 350 ventilators from its emergency stockpile in response to the critical situation.

The government said the Canadian military will airlift the supplies to the country.

In India, images of jam-packed hospitals and sick people sharing oxygen masks on the street are driving home the scope of the country's latest wave, with COVID-19 deaths reaching a new high of 3,780 in the last 24 hours as daily infections rose by more than 382,000.

This report by The Canadian Press was first published May 5, 2021.