Fish Creek Bridge replacement to be fully-funded, along with a bridge at Hartell and several paving programs to improve highways in the County.
May 5, 2021 3:15 PM By: Krista Conrad 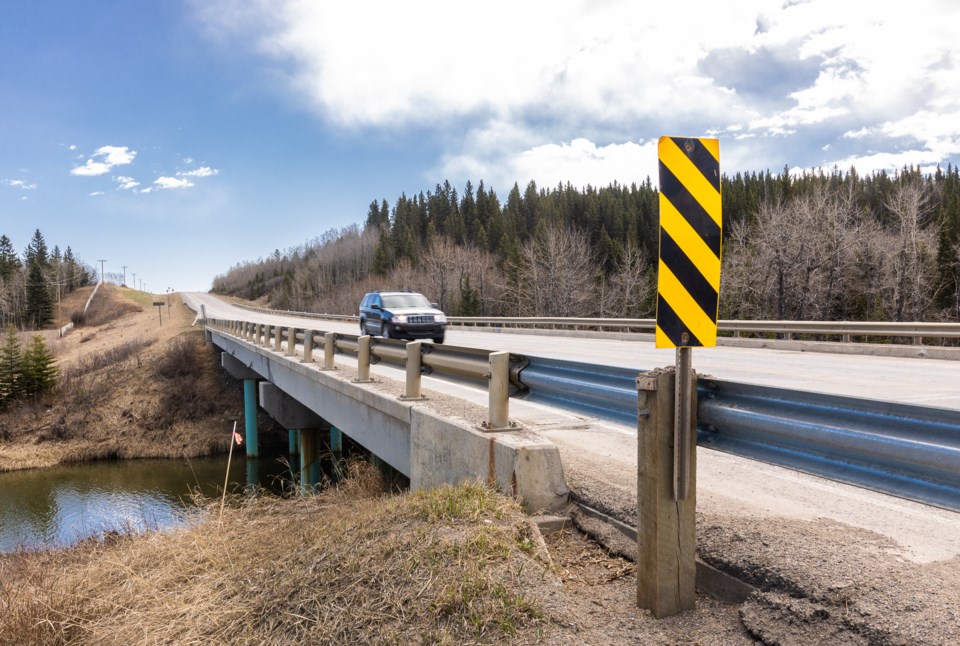 Cars cross the Fish Creek Bridge on Highway 22X near Priddis on May 1. The bridge is one of several infrastructure projects for which Foothills County has allocated $11m in much-needed upgrades.Brent Calver/OkotoksToday.ca

Foothills infrastructure projects have been given the Provincial green light.

After more than a decade of lobbying to have bridge construction done in Priddis, the Fish Creek Bridge on Highway 22X at Priddis Valley Road has moved from the sunshine (un-funded) list to the approved and fully-funded project schedule.

The bridge work has been allotted $11.1 million in the Province’s 2021 capital plan.

“This is noted for the design phase, but it is considered fully-funded,” said Reeve Suzanne Oel, who also represents Div. 4 where the bridge is located. “This is the answer to our request of over 10 years of persistent lobbying, and we’re extremely grateful for that.”

She said the work began with former Div. 4 Coun. Terry Waddick back in 2008 when Alberta Transportation conducted a study on the section of Highway 22 between Priddis and Bragg Creek. The study indicated the need for a bridge replacement east of Priddis.

Thirteen years later, the work has been made a priority and Oel said it will make a dangerous intersection much safer.

“Their plan is to provide widening and improvements for a safer flow of traffic near the main access of the Hamlet of Priddis,” she said.

There have been several accidents and close calls at the intersection over the years, especially as traffic flows increased, she said.

During COVID-19 the number of vehicles heading west has spiked as people look for recreation close to home, and the problems have been exacerbated.

She said preliminary design drawings show lanes being added to allow for passing on the right-hand side of the highway rather than a right-turn-only lane onto Priddis Valley Road. There would also be a climbing lane heading eastbound, she said.

More details on the design are to come, and construction should take place over the next couple of years, she said.

Foothills County has also been allotted funding for other infrastructure projects, including several paving programs, she said.

The first is 18 kilometres of paving on Highway 22 south of Longview, between Highways 540 and 541.

“There is also 17 kilometres of repaving categorized as construction going through Black Diamond, south to Highway 541,” said Oel. “That is going to affect the town as well.”

Some repaving is slated for Highway 2A and Highway 552, known as the Okotoks overpass, heading east toward Heritage Heights, she said.

In addition, a bridge replacement near Hartell has been approved, said Oel.

Permission has also been granted for a joint project on Highway 7 with the Town of Okotoks, to have traffic lights installed at 16 Street/Big Rock Trail. In June 2020, Alberta Transportation agreed to pay half of the $1.2-million project, with the Town and County splitting the difference, she said.

There is significant work to be done before the lights are installed, said Oel.

“We have to realign the intersection before we put the lights up, so there has to be some grading and construction work on that, then come the lights,” she said. “I believe that is slated for this year.”

Jeff Edgington, infrastructure manager for Foothills County, said there will be a lot of balls in the air with so many paving projects approved in 2021, to ensure traffic flow and gravel hauling are able to continue unimpeded.

“It will be a juggling act for us this summer to ensure that everybody’s happy,” said Edgington. “That’s a lot of paving and a fairly long construction program on that (Hartell) bridge.”

Oel said the County is thrilled with the announcements of improvements that will take place around the municipality, as many of them are much-needed.

"We're feeling rich with the response we've received," she said.

About the Author: Krista Conrad