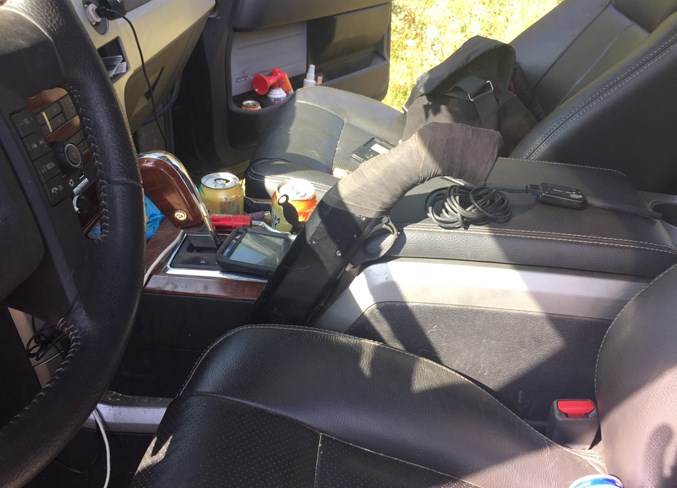 A sawed-off shotgun wedged next to the driver’s seat was located inside a stolen truck, as well as other weapons and a replica handgun. Photo courtesy RCMP

A number of charges have been laid following an investigation north of Elk Point.

On Aug. 20, Elk Point RCMP, Cold Lake Police Dog Services (PDS) and the Eastern Alberta District Rural Crime Reduction Unit (EADRCRU) conducted an investigation north or Elk Point with the intent of finding a stolen vehicle involved in crimes throughout the Lakeland area, according to an RCMP media release.

“Police located a different stolen vehicle and arrested its occupants. A sawed-off shotgun wedged next to the driver’s seat was located inside of the stolen truck, as well as other weapons and a replica handgun. Two of the arrested individuals were wanted on outstanding warrants,” reads the release.

Berland was also charged with obstructing a peace officer, failing to comply with a recognizance and failing to attend court. He was also wanted on outstanding warrants for several offences, including mischief, breaking and entering, using a forged document, and fraud.

Moyah was also wanted on outstanding warrants for flight from police, obstructing a peace officer, and failing to comply with probation.

Stanley and Waskahat were released following a judicial hearing.  Stanley is scheduled to appear in court on Aug. 29, in St. Paul.

Waskahat was scheduled to appear in court in St. Paul on Aug. 22, but “She failed to appear and now has an outstanding arrest warrant,” reads the release.