The leaders of the both the Saskatchewan Party and NDP will be in Saskatoon to watch the results
Oct 26, 2020 3:45 PM By: Canadian Press 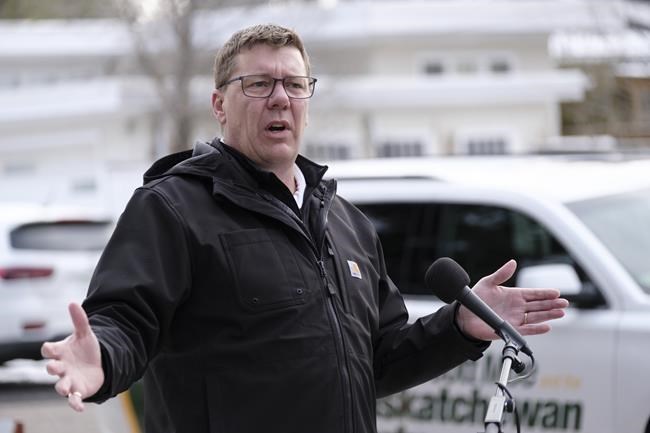 Saskatchewan Party Leader Scott Moe speaks during a press conference in south Regina on Wednesday Oct. 21, 2020.&nbsp;Moe will appear at a car rally with supporters this afternoon outside of Regina.&nbsp;&nbsp;THE CANADIAN PRESS/Michael Bell

REGINA — Saskatchewan voters choose today which leader will steer the province through the rest of the COVID-19 pandemic, and whatever unforeseen challenges lie ahead following election day.

The leaders of the both the Saskatchewan Party and NDP will be in Saskatoon to watch the results, and later appear at campaign events lacking the usual election night fanfare because of restrictions in place around gatherings.

Elections officials won't start counting the ballots received by mail until after today, meaning some election results may not be immediately known.

Saskatchewan Party Leader Scott Moe will start election day in his home community of Shellbrook, 140 kilometres north of Saskatoon, where he will cast his ballot.

The NDP's Ryan Meili already voted in advance polls, and the leader instead will participate in an online rally with his party's candidates.

This is the third provincial election to be held since the COVID-19 pandemic began. The other two have worked out well for the incumbents.

In New Brunswick last month, Blaine Higgs was able to lead the Progressive Conservatives to a majority after winning a minority the last time around. John Horgan was able to do the same for the New Democrats in British Columbia over the weekend.

Moe, who is trying to secure a fourth term for the long-reigning Saskatchewan Party, has campaigned on a ballot box question of who voters trust to recover the economy from the COVID-19 pandemic.

The 47-year-old rural legislature member and former cabinet minister came to the premier's office two years ago to replace Brad Wall as leader of the centre-right party after his retirement from politics.

Moe has promised to introduce millions in new rebates and tax credits if the party is re-elected.

Meili is urging voters to cast a ballot for change this election, and see the NDP form government in the legislature for the first time in 13 years.

He's made campaign promises over the past four week to spend millions more on health-care, classroom education and to bring in a $15-an-hour-miniumum wage.

The NDP is hoping Meili, 45, will be able to hold onto his seat in Saskatoon Meewasin because the past two leaders resigned after losing theirs to Saskatchewan Party candidates in the 2016 and 2011 elections.

Meili has led the NDP since 2018, and tried twice before to become party leader. The family doctor was first elected to the legislature in a byelection in 2017.

He says voters should not give the Saskatchewan Party another term in government because it would lead to austerity measures, like service cuts and increased taxes to deal with revenue shortfall from the pandemic.

Moe has ruled that out, saying he plans to recover the provincial economy through COVID-19 by focusing on growth and job creation.

He pledges to eliminate the province's $2.1 billion deficit by 2024. Meili says an NDP government wouldn't look at delivering a balanced budget in the first term.

The Saskatchewan Party held 46 seats in the legislature at the time the election was called, while the NDP had 13. Two seats were vacant.

This report by The Canadian Press was first published Oct.26, 2020

Summer vaccination expected to be available for most Albertans: Kenney
Dec 3, 2020 11:45 AM