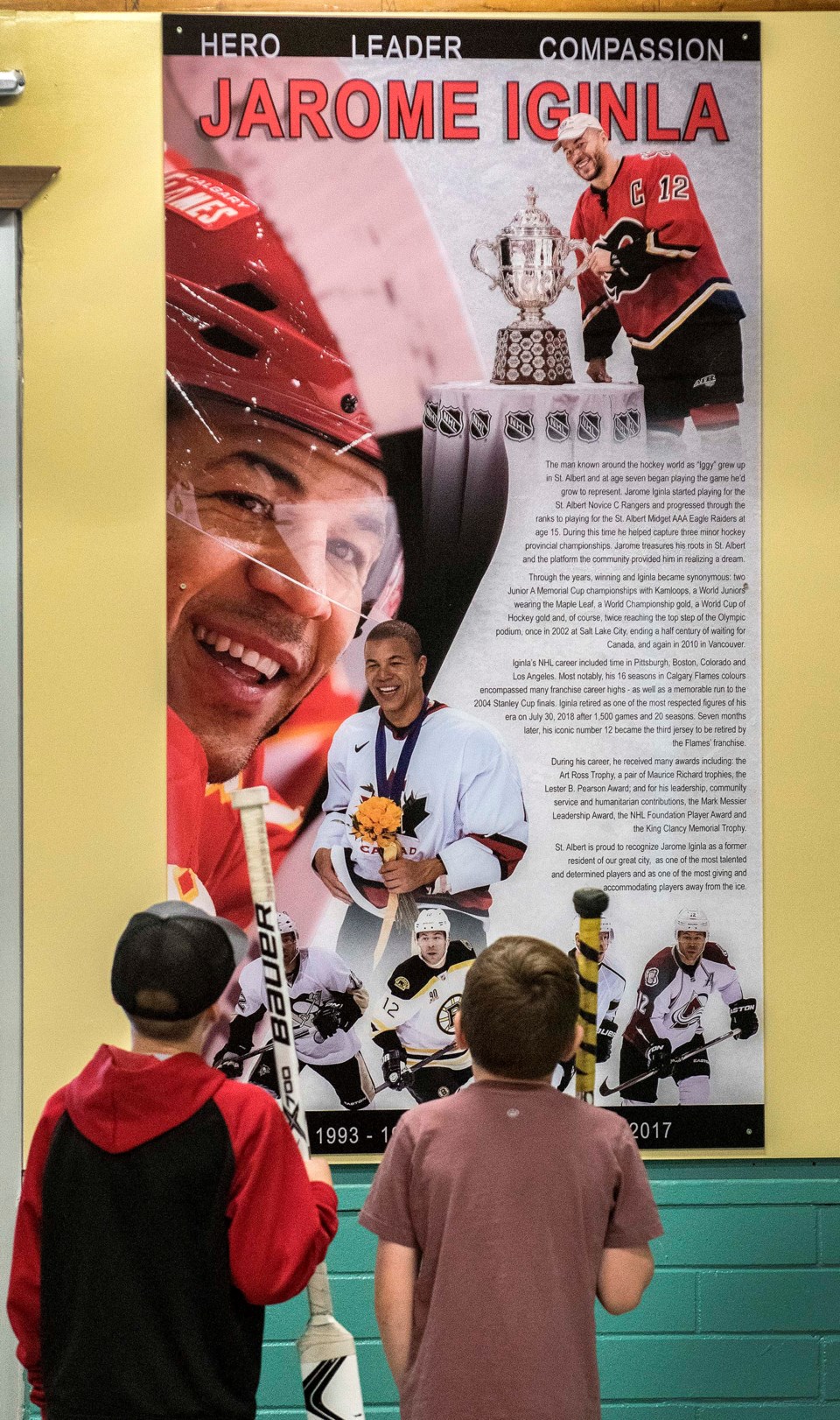 WALL OF HONOUR – A couple of young hockey players check out the new poster in the lobby of the former Akinsdale Arena depicting its new namesake in honour of Jarome Iginla. The Jarome Iginla Arena ceremony is Sunday at 1 p.m. DAN RIEDLHUBER/St. Albert Gazette

Home is the where the heart beats the strongest for Jarome Iginla.

The centre of the St. Albert sports scene while growing up as a rising hockey star was Akinsdale Arena and Sunday’s ceremony honouring its new namesake will bring Iginla full circle to where it all started.

“It’s very, very special. It’s something that was unexpected. It’s a very, very nice surprise. I have a lot of great wonderful memories in St. Albert, but also at Akinsdale. It was my favourite rink growing up in,” Iginla told the Gazette in a phone interview on Thursday.

“It’s a little bit humbling. You don’t expect to have an arena named after you,” said St. Albert’s revered native son. “I wonder what they will call it as a nickname. Maybe the Igloo or something like that.

The 30-minute on-ice ceremony starts at 1 p.m. and following a media scrum is the autograph session with the guest of honour outside his rink.

The event includes a free barbecue and public skate, plus a street hockey game, from 1:30 to 3 p.m.

Iginla will be joined by his family – wife Kara, his junior high sweetheart from Lorne Akins, son's Tij and Joe, and daughter Jade – as friends and fans gather en masse to salute the two-time Olympic gold medallist and future Hockey Hall of Famer.

“I don’t really know what to expect, but it’s definitely always good to see familiar faces,” said Iginla, who gets excited about “bumping into people from hockey, baseball or school” on visits back to the city where he learned to skate, shoot and score like a pro during those early years at Akinsdale Arena.

“We only played in the Perron Arena for a short time because it got torn down pretty early, it was the Ducky Dome, and Akinsdale was the gem from atom on where everyone wanted to be when they did the ice times. It had a nice atmosphere,” Iginla said.

“It’s surreal when you think about playing and growing up in St. Albert and how fast everything goes,” said the 42-year-old born on Canada Day. “It’s kind of neat to think back and relive some of that and I do actually a lot. Some of my best friends today I still keep in touch with, guys I played with on the midget (Eagle Raiders) team with but also played hockey with at eight, nine years old and baseball, too.

“We relive some of the losses and wins, and with some of them we still give each other a hard time about. Some of those games I remember being as nervous as any game I’ve played.”

Iginla’s last season of St. Albert minor hockey was 1992/93 with the midget AAA Eagle Raiders before joining the Kamloops Blazers in the Western Hockey League. The second-year bantam lit up the Alberta Midget AAA Hockey League as the top scorer with 34 goals and 87 points in 36 games as the Raiders finished 30-2-4 in league play before losing the AMHL provincial final to the Calgary Northstars.

“It was very unexpected for myself to play midget AAA. I remember my grandpa (Rick Schuchard) taking me to go to tryouts. He said just go for the ice time. There were some other bantam AAA first years – Billy Russell, Doug Strobl and I believe Jerry Cunningham went – so there was a group of us that were just going to go and try out. It was good ice time, especially when you first didn’t expect to make the team, but tryouts went well and a group of younger guys made it and it was a ton of fun,” Iginla said.

“You had to play on the first two lines, that was the rule if you were a young person, which I think is fair. You’re not going to come up and sit," Iginal added. "I was very fortunate that (head coach) Kelvin MacKay gave me the chance but, not only that, I played with Spencer Bettenson, he was second in league scoring (33-43-76 in 33 games) and was a heck of a player, and in fairness he went home during a few games and missed out on scoring more points.

“I played with Shawn Mansoff and we ended up having some really good chemistry, but Bettenson was a very, very dominating player and it helped a ton to be thrown in with those guys.

“Jason Holland was also on defence and he ended up winning MVP (as the top defenceman) in the league.

“We had a heck of a team, but I also got to be in a really good situation to succeed and gain confidence. It was a really good year for development. It was also a time to have fun and continue to love the sport and keep wanting to play and pursue it as long as I could and try and make the NHL so it was a great year in a lot of ways.”

Holland, who joined Iginla in Kamloops after their first season together with the Raiders and won a pair of Memorial Cups together, said Iggy is the same person now as he was then.

“He’s very happy with a very balanced personality with all the success and he was like that at that age. It never went to his head. He never had an arrogant bone in his body, but he was so driven and that’s a big part of his success,” said Holland, who “always played sports against Jarome growing up, right from probably six years old” before they became teammates.

“That’s when players really started to train off season and him and I really were into that fitness aspect, so we always enjoyed talking about what each other was doing for their summer training and the different things in the summer to prepare for that first year of junior and then as we were in junior, the same thing going into pro, so we shared that in common,” Holland said. “And now seeing one of the local arenas named after him is kind of neat because as you were growing up you would see some of those rinks being named after some of the players that we watched growing up. Jarome has tons of unique experiences where his career has taken him and it’s been great to watch as a friend and as a fan.”

Among the 81 NHL games for the Morinville product was a memorable encounter with the former Calgary Flames’ captain, who had his No. 12 jersey retired in a ceremony last season.

“I do remember one time in Calgary we played against each other and I gave him a cross-check on the back and knocked him down and then thinking, ‘Oh, where is this going to go now,’ but that was pretty neat. He was pretty established in Calgary already at that time,” said Holland, 43.

Iginla went on to be drafted 11th overall in 1995 by the Dallas Stars before playing 20 seasons as a power forward with the Flames, Pittsburgh Penguins, Boston Bruins, Colorado Avalanche and Los Angeles Kings.

Iginla also established multiple team records during his 16 seasons with the Flames, including nine as captain.

Among the major awards bestowed upon Iginla in the NHL include the following:

• 2002 Lester B. Pearson Trophy as the NHL’s most outstanding player, as voted on by the members of the NHLPA.

• 2004 King Clancy Award for the NHL player who best exemplifies leadership qualities on and off the ice.

• 2009 Messier Leadership Award, which recognizes an individual as a superior leader within their sport and as a contributing member of society.

Bill Russell, one of Iginla’s best buddies (They met through baseball and became good friends at age eight), knew his former classmate at Lorne Akins School was destined for greatness while playing hockey together.

“That overall athleticism is what allowed him to dominate in hockey from a young age and just a relentless work ethic. He’s always had that inner self confidence and that self belief that he was going to go out there and be better than everybody else and it wasn’t an arrogant thing at all. He’s not like that to this day. He just believed it. He was going to do whatever it takes to fulfill his dream," Russell said. "When he wasn’t drafted in the WHL draft I think he might say now that at the time that’s what pushed him and in hindsight it was probably a good thing.

“He just rose above all others from a young age and kept pushing and pushing, and never really took it for granted, never let it get to his head and ego thinking 'I’m already good enough.' He always wanted to get better and better, that was even in his NHL days.”

Russell, 42, described the rebranding of Akinsdale Arena as a fitting tribute to one of St. Albert’s most accomplished athletes in any sport.

“There is no better guy to have a rink named after them than Jarome,” said the former St. Albert Saints netminder. “We grew up at Akinsdale, we didn’t have Servus Place so it’s very cool, obviously totally deserving and something very exciting. It's probably very surreal for everyone and especially for him too, but considering the career he had it’s really not too surprising about it. It’s an honour for him and his family.

“As a friend you were hoping that maybe that was going to happen and maybe expecting it just because of the career he obviously did have and everything he had done for St. Albert and being that role model on and off the ice. That’s so important as well; being such a good guy off the ice and kids look up to him.”

One of the most vivid memories of Iginla for Russell was at a youth tournament in California playing on a blended St. Albert/Edmonton team and the final was 4-0 against the Colorado Little Rockies.

“Jarome had a great tournament and the referees were Bernie Nicholls and Jimmy Fox for the game, and I just remember they had it televised, it was almost like a Shaw Cable type thing, and they couldn’t get Jarome’s name right. They probably went through five different pronunciations with his last name and they basically said if he keeps playing like this he's going to make a name for himself,” said Russell, noting Iginla really rose to prominence with the peewee AAA provincial championship winning team.

“We dominated that year and he was having a breakout year in that second year of peewee AAA. He was definitely the leader on the team, “ Russell said. “Our team picture is still in Akinsdale, but I guess now it’s Jarome Iginla Arena."

About the Author: Jeff Hansen

Jeff Hansen joined the St. Albert Gazette in 1991. He writes about sports, athletes and teams from St. Albert and area.
Read more