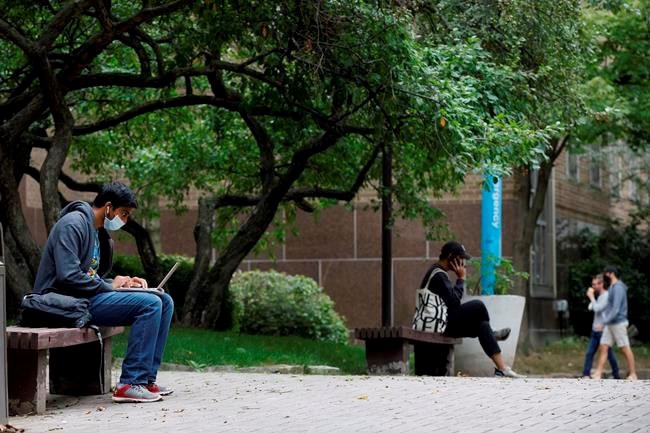 People sit outside at the Ryerson University campus in Toronto, Tuesday, Sept. 8, 2020. THE CANADIAN PRESS/Cole Burston

Ottawa's freeze on federal student loan payments and interest is weeks away from its end date, but students and graduates say extending the measure would offer relief from the lasting financial pressures of the pandemic.

Gloria Mellesmoen, who is working towards a PhD in linguistics at the University of British Columbia, said she used the interest-free period to make payments on her principal loan amount.

"It was nice to be able to get that number to start going down and not feel like it was as big of a thing over my head," Mellesmoen said in a telephone interview.

"Having such a big number, it was nice to be able to decrease the amount of interest I will have to pay and also to feel personally like I'm paying off my education."

Ottawa suspended repayments for approximately one million federal student loan recipients from March 30 to Sept. 30. No interest was to accrue on those loans during the same period.

But students and organizations say it's too soon to end the grace period.

Bryn de Chastelain, chair of the Canadian Alliance of Student Associations, said his group wants Ottawa to extend the moratorium.

"I think (it) would go a long way to ensure that students have some time to get on their feet," de Chastelain said from Halifax.

He noted the job market is still reeling from COVID-19, creating stress among students and recent grads juggling loans, high tuition costs and other bills.

The alliance commissioned an online Abacus Data survey of 1,000 students and released findings in June. Seventy-five per cent of respondents said they expected the pandemic to affect their financial situation and employment prospects beyond this year.

Emily Grant, a recent master's graduate in political management living in Ottawa, said the pandemic has had a noticeable impact on her job search.

Her field is competitive at the best of times, Grant said, but she's found employers that have moved operations online are scaling back hiring at the same time.

In-person networking opportunities have also disappeared due to the public health rules during COVID-19.

"That adds a whole other layer of not being able to go out and attend events where you can meet and interact with the people who could potentially be hiring you," she said by phone.

Grant said she's hopeful the loan freeze will be extended or the job market will expand, but the uncertainty adds stress and anxiety to financial and career planning.

"It's a whole mess of a situation, honestly, that wasn't expected," she said.

A Friday statement from a spokesperson for the office of federal Employment Minister Carla Qualtrough did not indicate plans to extend the loan moratorium.

The statement pointed to the Repayment Assistance Plan for those resuming repayment after the moratorium.

It also noted $1.9 billion in recently announced measures to support students this fall, though higher student grants and raising the weekly cap on low-interest student loans.

Meanwhile, the Undergraduates of Canadian Research Intensive Universities, a student union alliance, has proposed a two-year grace period for new graduates' loans as they ease into a disrupted workforce.

In their submission for this year's pre-budget consultations, the group argued extending the current six-month grace period would pay off while also assisting students in taking on less debt.

"The government will assist students searching for good jobs while taking on less debt, supporting Canadians and stimulating the Canadian economy in response to COVID-19," the submission document reads.

"With less pressure on repaying their student loans, students will be able to reconceptualize their life plans, moving towards home ownership and entering the middle class sooner than was possible before."

Certified financial planner Jackie Porter said those preparing for loan repayments should be ready to pivot with the changing job market, as people in all stages of their careers have been forced to do this year.

"Business owners who are much, much closer to retirement are having the same conversation, so students actually have the benefit of time to make this all work out," Porter said by phone.

"The key thing for them ... is to not let their 'what now' scenario, from a mental standpoint, be their long-term scenario."

She suggested moving back home if possible to reduce costs, applying for a wider variety of jobs and taking additional courses to stand out in the applicant pool, while planning for the next few years.

Toronto personal finance expert Lesley-Anne Scorgie noted that while student debt is stressful and it's important to plan for repaying loans, it's a form of debt that is known to produce income growth down the line.

"It's a burden and it's a heavy one, but it's one of the better debts that you can actually take on," she said.

This report by The Canadian Press was first published Sept. 18, 2020.