Visitors asked to stay away from Banff – for now

“It’s sort of odd for a tourism community to say this is the time to stay away, but we have to show leadership in our community by how we communicate,” said Councillor Peter Poole.
May 5, 2021 12:30 PM By: Cathy Ellis 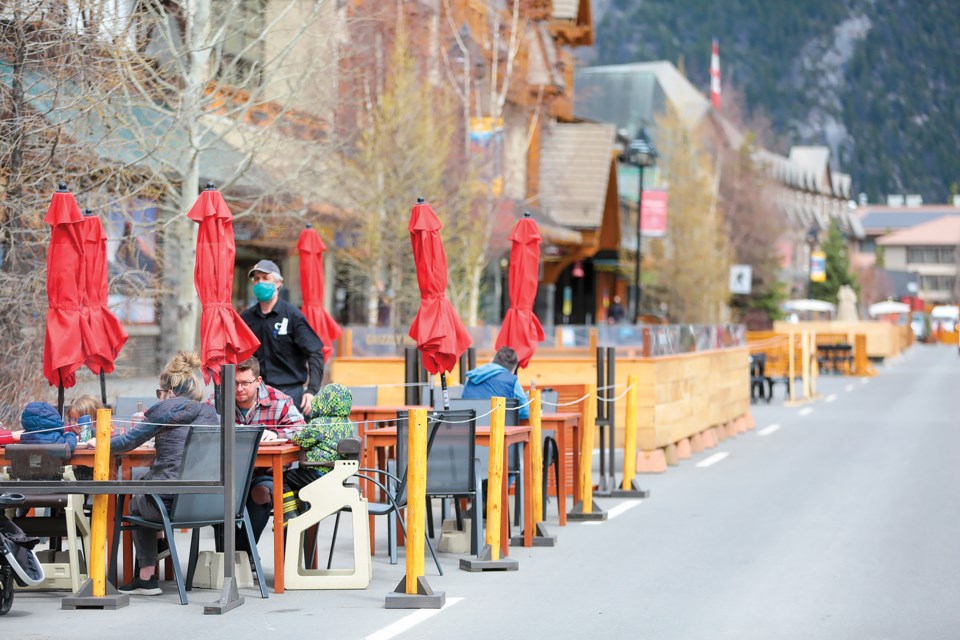 A family sits on a restaurant patio along a pedestrianized Banff Avenue on Tuesday (May 4). EVAN BUHLER RMO PHOTO

BANFF – The Town of Banff is asking visitors to stay away from Banff National Park until after the May long weekend as the community and the rest of the province battle to get the COVID-19 spike under control.

In the absence of a provincial travel ban, town council stopped short of setting up checkstops to turn tourists away, but unanimously decided to actively discourage visitation, while also asking residents to stay home.

Council also hopes Parks Canada and Banff and Lake Louise Tourism will do the same in any joint communication efforts.

“It’s sort of odd for a tourism community to say this is the time to stay away, but we have to show leadership in our community by how we communicate,” said Councillor Peter Poole, who introduced the motion following a two-hour in-camera session at a special meeting of meeting on Tuesday (May 4).

“Personally, I wanted the premier to provide travel restrictions here in Alberta as there are in British Columbia and as there are in the Maritimes because mixing the virus spreads it.”

Premier Jason Kenney introduced stronger public health measures on May 4 to prevent the health-care system from being overwhelmed, with hospitalizations reaching 671, including 150 people in intensive care units.

The province reported 1,743 new cases of COVID-19 on May 4, bringing the total number of active cases to  23,623, the highest total since the pandemic began 14 months ago. Alberta has the highest case rate in Canada. Premier Kenney said the tougher restrictions, which include moving schools online, closing more businesses and limiting outdoor gatherings to five people, are warranted to “prevent a disaster from unfolding in our hospitals.”

“The arrival of highly transmissible COVID variants in Alberta is putting real pressure on our health care system,” he said.

Banff National Park, which includes the Banff townsite and Lake Louise, remains a COVID-19 hotspot, with 104 active cases and a per capita case rate of 773 per 100,000 as of May 4.

That’s down from a 1,200 cases per 100,000 at the end of April, when Banff had the most per capita cases in the province. There were 265 new cases diagnosed in April alone and 16 new cases in the first three days of May.

“The province of Alberta is an incredibly bad way when it comes to COVID right now,” she said.

“It is to the benefit of this entire province for people to stay home. That is what we need to do as residents and it’s what we need our potential visitors to do.”

Alberta Health Services provided the Town of Banff with provincial contact tracing data of about 300 cases in the Banff townsite from March 1 until the end of April – a breakdown identifying the primary source of infection.

The data shows 25 per cent of COVID-19 cases were a result of workplace exposure, mostly from restaurants and hotels, and another 25 per cent were linked to congregate housing.

Outdoor and indoor social gatherings accounted for about 12 per cent of the positive cases, eight per cent were linked to single family household spread and five per cent were listed as other, which included inter-provincial spread. There were no clear links to a known case or multiple exposures in the remaining 25 per cent of cases.

Coun. Poole said this was important information for decision-making.

“The thought that 50 per cent of cases in the last couple of months are from workplace settings – hotels and restaurants – as well as in congregate settings leads me to think we need to communicate about the seriousness of the virus spread in our community,” he said.

As cases began to spike in Banff in April, many Banff residents, including local doctors, raised various concerns including ongoing visitation to the national park in the third wave of the pandemic.

Long-time resident Steve Michel called on council to immediately introduce checkstops and stop communicating that visitors are welcome right now, saying recreational tourism is not essential travel as defined by many other jurisdictions.

“We need to stop producing media lines that say things like ‘at this time people are still able to visit Banff,’ or ‘we recognize that may people consider coming to the mountains as essential travel for their mental health,’ ” Michel said during a council meeting on Monday (May 3). “Visiting Banff right now is not essential.”

Michel said every time the COVID-19 situation begins to improve – such as after the last wave in November when Banff reached its historical high of 1,386 cases per 100,000 – “we just take our foot off the gas and it all comes back again.”

“I really think that we need to have a complete circuit-breaker … just get this under control or once and for all” he said.

Mayor Sorensen said she is pleased to see Banff’s case count has come down in the last few days, but cautioned that could change at any moment as new cases continue to be diagnosed.

“We have people recovering and that’s causing our total case count to decline; however, based on the province’s filters we are absolutely still a hotspot,” she said.

With the province announcing mass vaccinations of Banff and Lake residents, including those 18 to 39 years of age, Mayor Sorensen does see light at the end of the tunnel.

She said about 85 per cent of Banff’s population would be vaccinated if all residents meeting the new vaccination criteria for Banff and Lake Louise got their jabs in their arms.

“The news about these vaccines ramping up is just the best news for our community,” she said, thanking all involved in the lobbying efforts to get mass vaccinations in Banff.

Mayor Sorensen believes the summer tourism season can still be saved if people follow the the provincial health restrictions, stay at home and get vaccinated as soon as they can.

“We can have a successful economic summer in this community if those things all fall into place,” she said.

As part of the crackdown to stop the COVID-19 surge, Premier Kenney also said all workplaces in the province with COVID-19 outbreaks will be closed.

In Banff National Park, Sunshine Village and Moose Hotel and Suites are on the outbreak list on the AHS website. Mount Norquay ski hill is also listed, but closed in April.

At the time of publication, neither the Town of Banff nor the Outlook had clarification on what this meant for Sunshine, which has a planned closure date of May 24, or Moose Hotel and Suites.

“We’re certainly going to be very active in trying to understand that,” said Silvio Adamo, the director of emergency management for the Town of Banff.

The province is also increasing fines from $1,000 to $2,000 for those caught break public health measure rules.