Whitford sentenced to eight years for death of 16-month-old 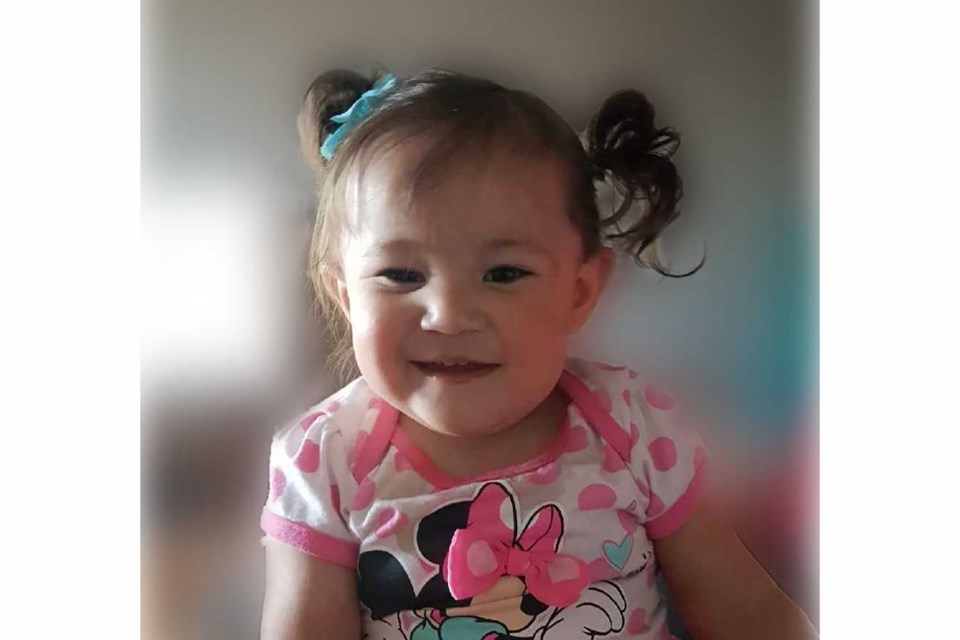 Veronica Poitras sustained serious head and neck injuries prior to her death in August of 2017. File photo.

LAKELAND - After being found guilty of manslaughter in the death of 16-month-old Veronica Poitras in November of 2019, Sherman Whitford was sentenced to eight years in prison on Dec. 1.

Whitford went before a judge on Dec. 1 during a sentencing that occurred at the St. Paul Courthouse, and through video and online means. Whitford was seen in custody at the Edmonton Remand Centre via CCTV.

On Aug. 26, 2017, 16-month-old Veronica was brought to the Cold Lake hospital by her mother, where the toddler was found to have sustained serious neck and head injuries. She died two days later in an Edmonton hospital.

An August 2020 court date was held this summer, and at that time the Crown and defence could not agree on a time in custody issue. That issue has since been resolved, with both sides agreeing to one-and-a-half times credit for the time spent in custody up until March 15, 2020, and two-and-a-half times enhanced credit for time spent in custody after March 16. The total credit would equal about 4.4 years, heard the court on Tuesday. That number was then rounded up to four-and-a-half years.

During the sentencing, it was noted that Whitford has spend most of his time in custody in segregation, for his own protection, and was currently in quarantine due to a number of cases of COVID-19 at the remand centre. It was also noted that Whitford's safety risk increased following him being found guilty of manslaughter, and there also exists a personal health risk due to the fact that Whitford is diabetic.

In its final submission, the Crown asked for eight to 12 years as a sentence, which is on the high end of what has been seen in similar cases.

The defence argued that the incident that resulted in the death of Veronica was "a spontaneous matter," according to defence lawyer Tim Dunlap. Whitford had no history of abuse toward children previous to the incident. He requested a shorter sentence, ranging from three-and-a-half to five-and-a-half years.

Court of Queen's Bench Justice Stephen Hillier asked Whitford if he would like to say anything to the court before the judge took time to deliberate.

Whitford did speak, and offered a brief apology.

"I'm sorry to everyone who has been hurt," said Whitford. He acknowledged that the ongoing court matters have been hard on everyone, and haven't allowed the opportunity for closure.

When Hillier returned to court, he spoke at length about his decision. He noted that it simply is not enough to say "we're sorry" and that there's an enduring responsibility for everyone to ensure the welfare of those who are vulnerable. He noted that there was a failed commitment to protect and nourish Veronica.

He noted that the death of Veronica has had an impact on the greater community, and not just those directly involved.

After using a number of other cases to compare, Hillier noted that abuse against children must have a proportionate sentence, and said the behaviour simply cannot be tolerated and must be denounced.

While the factors of a Gladue Report were acknowledged and are important, Hillier said they cannot be stacked to reduce the range of a proper sentence. Whitford is from the Whitefish (Goodfish) Lake First Nation #128.

Hillier reiterated that due to the force inflicted on the child, there was nothing to suggest this was an unfortunate accident.

Whitford is also subject to providing a mandatory DNA sample, and a mandatory weapons prohibition order.

About the Author: Janice Huser

Janice Huser has been with the St. Paul Journal since 2006. She is a graduate of the SAIT print media journalism program, is originally from St. Paul and has a passion for photography.
Read more