A Night at the Wild West fundraiser taking place Sept. 27

A private fundraising event called A Night at the Wild West will be held at the Texas Gate on Sept. 27 with an Old Wild West themed party.
0
Sep 2, 2019 11:06 AM By: Troy Durrell 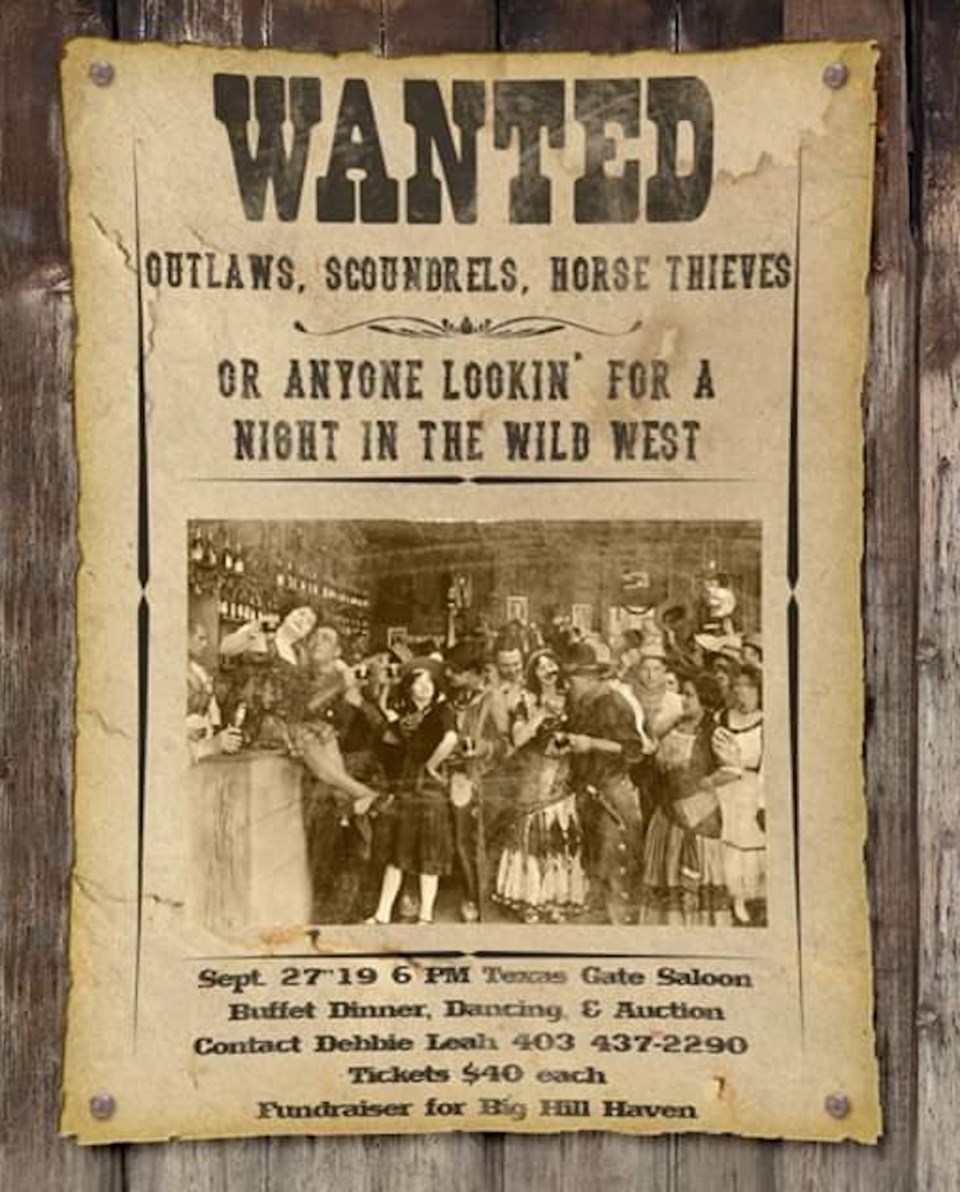 The Texas Gate will be hosting the event called A Night at the Wild West fundraiser on Sept. 27. Submitted Photo

A private fundraising event called A Night at the Wild West will be held at the Texas Gate on Sept. 27 with an Old Wild West themed party.

Tickets are $40 per person which includes dinner and dancing while there will also be a silent and live auction with a charity jail cell in order to raise funds for the Big Hill Haven Emergency Women's Shelter.

"We're looking to raise over $20,000 from the event," organizer Debbie Leah said. We chose Big Hill Haven because Cochrane is in need of a safe place for women and children who are fleeing domestic violence. Big Hill Haven has a resource worker who works out of the Family and Community Support Services (FCSS) and she currently sends people into Calgary and elsewhere to find shelter. As a board member of Big Hill Haven, I can share that the board is actively seeking shelter here in Cochrane and we need funds to get bricks and mortar."

Leah said the theme of the event was a fairly obvious one, as they wanted to make the first annual fundraiser a memorable one.

"This is an old Wild West-themed event. People do not need to dress in the old wild style, but they are asked to wear their best Western duds," Leah said. "It will be a fun evening as this is the first time we've hosted this event and it it goes well, we will plan it yearly."

"We as organizers thought it was a very fitting theme with the Western spirit that we have in Cochrane, and what a better location then the historic Rockyview Hotel and the Texas Gate Saloon."

Bad Apples, made up of Danielle Edge and Rob Kaup, will be performing at the event. On any night, no one knows what will happen, not even them. Taking requests and playing any and all genres is what they've become known for so it's no wonder they're many people's first choice for parties, weddings, and other events.

These two started as an acoustic duo; two acoustic guitars with effects and a drum trigger to fill out the sound. For years, this format was exciting and would fool any audience with their eyes closed. Was there, in fact, a full band performing on stage? Taking a short break to play full time in their original project, Feel Good Jacket, they came back to Two Bad Apples with the need to rock a little harder than before and the skills to do just that.

Rob Kaup was raised north of Edmonton, on a grain farm in a musical family. Music was always around, and so was hard work. By 13, he was on keyboard and guitar in his first band, playing community events and local rooms. He studied some music at Grant MacEwan College, playing the road full time taught him the rest. Though usually settling somewhere within country, rock, and r&b, playing professionally for over 20 years has made him well rounded in many styles. Drums may have been his first instrument but over time he became well accomplished on guitar, piano, bass, vocals, sax, synthesizers, sequencers, engineering and producing.

Danielle Edge is a force to be reckoned with. Just a small-town girl, yet always driven to excel at anything she puts her mind to. Edge started singing at a very young age, finding a second home on stage through musical theatre and acting. Her first performance in a band came at the age of 14. That band vowed to never play again and the video was destroyed, but she continued to play music as a hobby. Throughout the years Edge has been many things; actor, banker, bartender, stunt woman, business owner, personal trainer, martial artist... seriously she’s done a lot of stuff in just a few years. In addition to the musical aspect, she also takes pride in her business and marketing skills.