Three up and coming Alberta filmmakers Griffin Cork, Morgan Ermter and Josef Wright began production on May 7 for their Telus STORYHIVE funded television and web-based series, Abracadavers, part of which will be filmed in Cochrane.
May 10, 2018 1:00 AM By: Troy Durrell 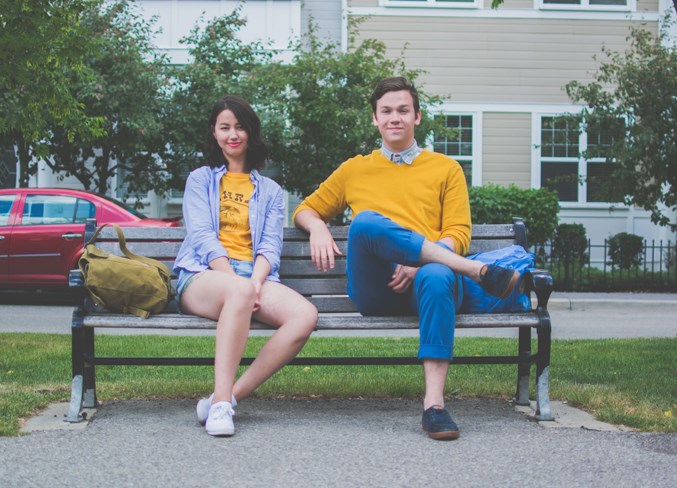 STORYHIVE television and web series Abracadavers will be filming in Cochrane over the summer.

Three up and coming Alberta filmmakers Griffin Cork, Morgan Ermter and Josef Wright began production on May 7 for their Telus STORYHIVE funded television and web-based series, Abracadavers, part of which will be filmed in Cochrane. The story is about a young man named Chris, whose mom died in a freak hair salon chair accident. Ever since then, he’s been attached to the chair responsible for her death. Gabriel, his closest friend, believes this is more than an obsession and along with their group of friends kidnaps him on a trip. On the road-trip everyone discovers, as Chris had previously begun to expect, that the salon chair gives those close to it superpowers. Chris, on the other hand, comes to understand he’s in fact struggling with obsessive compulsive disorder (OCD) and learns, along with his friends, that dealing with super-human abilities is sometimes easier to grapple with than what’s going on in your mind. The group trips, stumbles, but ultimately works and grows together to understand their new-found abilities and more importantly, themselves. The three filmmakers, under their corporation Numera Films, have teamed up with Mind Engine Entertainment, one of the leading film production companies in Edmonton who is currently in talks with Universal Studios. Both SAIT graduates, Ermter and Wright have been working for years on both independent and professional film sets in Alberta, like El Chicano, Fargo, Heartland, and Chokeslam. Cork, who stars in the series as well as an executive producer, had his first professional ACTRA gig at the age of 12, and was recently named one of this year’s Top 25 Influential Young Artists by the Alberta Foundation for the Arts.

"I met Josef about seven or eight years ago at a drama camp in Red Deer. We stayed in contact for a while and he brought me onto a short film when Josef and Morgan were still in SAIT doing one of their student films," Cork said when asked how he met his fellow producers.
"The three of us continued to stay in touch and they brought the series (Abracadavers) to my attention about three or four years ago with the story line and details. We were walking down an ally way for the first couple days of production and we found a perfectly intact salon chair just in an ally way ... so we wrote it into the the series and it became pretty cornerstone. So, in reality, the series has been in the works for three of four years now."
With filming of the series beginning on May 7, the group has been hard at work to make sure everything was in place including the settings for scenes, which not only include Cochrane but towns such as Drumheller and Sylvan Lake.
"Production has been going great over the last few days. We have an excellent team assembled here. They kind of push you to your edge and keep you on your toes with long days and little pay ... we have pretty simple days and keep it at a pretty straight eight hour clock. We want to make sure we get the best quality from our scenes and that everybody is happy with what's going on," said Cork.
"We had plans to shoot across Alberta, kind of from the very beginning. We're all from Calgary and we believe in the film community of Alberta, Calgary and surrounding areas. With stuff like the Fargo (television series started in 2014 that shot in Alberta for its third season in 2017) buzz, we just want to show off the gorgeous country side and other qualities we have in Northern and Central Alberta."
"As for Cochrane, it schematically and stylistically fits the theme of our show. It's spread out, which is something I really like and the surrounding country sides are fantastic too. We kept our show simplistic, real and honest and, to us at least, that's what Cochrane really represents."
Cork said those who know nothing about the series should enjoy it because it's relatable to everyday life.
"My favourite thing about the series is, even though we have all these Sci-Fi-esque elements like superpowers, the antagonist that we have, the problems presented to our characters are still something the audience can connect to," Cork said.
"They're still human and it's relatable. It's a nice community story of these kids who are trying to figure out who they are and what they're identity is. There are still things our characters go through like 'what kind of person am I? How do I go through this part of my life? Should I ask this girl to the dance?' There are still problems for people coming of age that they run into. We wanted to keep that part human and it was pretty important to us."
The group will continue production for the next few months and deliver their work to STORYHIVE by the end of July, which means Abracadvers will be released later in the summer or early in the fall. For more information on the release date, are to visit www.storyhive.com.