Band has some new material for sophomore gig in Cochrane

Winners of the Emerging Artist Award at the 2014 Edmonton Folk Music Festival, Edmonton-based husband and wife duo Peter Stone and Denise MacKay will be playing at Legacy Guitar and Coffee House for the second time July 10.
Jul 2, 2015 12:00 AM By: Cochrane Eagle Staff 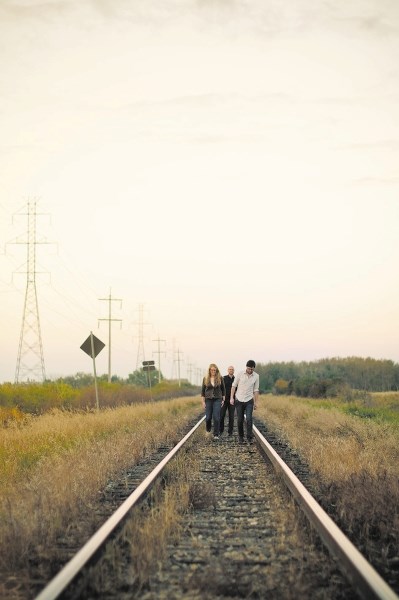 Winners of the Emerging Artist Award at the 2014 Edmonton Folk Music Festival, Edmonton-based husband and wife duo Peter Stone and Denise MacKay will be playing at Legacy Guitar and Coffee House for the second time July 10.

As described by CBC Music, their latest album, Wait With Me “... features the smart lyrics, harmonies, and storytelling that are making 100 Mile House well-known on the Canadian folk music scene.”

While music magazine Penguin Eggs described the band’s sound as “... lyrical and haunting, with a depth of feeling – sometimes raw and palpably authentic – you don’t find so often.”

The band will be kicking off their summer tour right here in Cochrane and the Eagle got a chance to chat with Peter Stone about sounding melancholy but staying silly, folk’s comeback and keeping his sanity.

Eagle: What are you most looking forward to on this tour?

Stone: We’re excited to play some of the stuff off that new album. We spent a month in studio working on these songs so we’ll be playing a bunch of stuff off the new album.

Eagle: What can people expect in that regard?

Stone: It still sounds like us; it’s not a huge departure. But I think we got a little more experimental with instrumentation. We’ll be playing a cellist, which we didn’t have the last time we came through Cochrane. That changes our sound quite a bit. That’s a pretty prominent instrument in the new album. This is our fourth album so we figured we’d just try some new stuff.

Our lyrics are a little different. Not too much; we’re trying a few different things. We want to make sure we’re always pushing ourselves to try new things. You don’t want to get too content and too stuck in patterns you’ve done before.

Eagle: Why do you think you gravitate towards that sentiment?

Stone: It’s just sort of the way it’s evolved. Maybe it’s a way to deal with that side of things. I’m not generally a melancholy person and anyone who’s seen us live before, we can be pretty jolly and silly on stage. Like a lot of people, it’s kind of the way they cope with that side of their personality, that half of life.

I think there’s definitely been an upswing in folk music in the past few years.

I think things happen in cyclical ways and it was folk music’s turn to rise to the top again. I think maybe this time, people are yearning for something that’s a little more heartfelt, original. Something a little more genuine.

But I think we can already see it sort of moving aside. A lot of those bands have done a couple of folk albums and are trying to change their sound. Mumford and Sons’ latest album is hugely different.

Eagle: Your band has kept a steady output of albums (three in four years); what’s key to keeping that pace?

Stone: We did slow down after the third one. We did three in four years and this new one will be a couple of years. I think it’s important you’re happy with what you’re producing.

We recorded the first few albums ourselves, so we didn’t have the financial constraints that some bands can have where you have to find 10 to 20 grand every couple of years. If we had to do that, then there’s no way we could have released three albums in four years.

Eagle: What’s your approach to making the album – more regimented and methodical, or casual?

Stone: (The new) album is the first one we did in a different studio – we have a studio in our house. (This one) we were forced to do it regimentally because we weren’t doing it on our own time.

Before that, we would try to do it in a certain amount of time, but because you’re doing it yourself and you’re doing it in your own home it always ended up taking a lot longer. It drags out and it drives you crazy. But that was what was fun about this last one we did.

We’d have two weeks and eight-hour days and we just did it every day. I enjoyed having that regimen to it. It kept me a little more sane, I think.

Eagle: What are you listening to currently?

Stone: The CD that’s been in my car that hasn’t been out of the player is Lucas Chassion. His latest album is unreal.

For more information or to purchase tickets to the show, visit legacyguitarhouse.com/events.