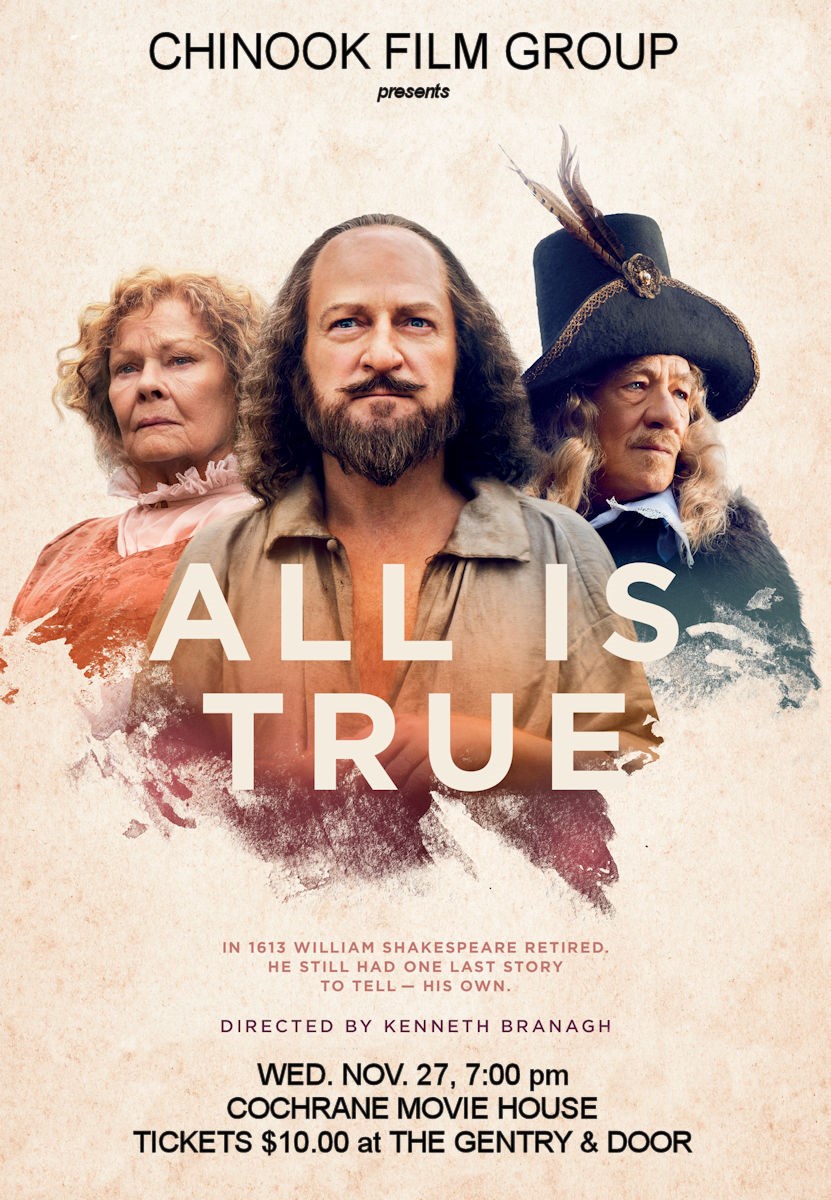 All Is True will be airing at the Cochrane Movie Theatre on Nov. 27. Submitted Photo

Cochrane's Chinook Film is back to present All Is True on Nov. 27 at the Cochrane Movie House.

All Is True is a 2018 British fictional historical film directed by Kenneth Branagh and written by Ben Elton. Branagh stars as playwright William Shakespeare.
The film features Judy Dench as his long-suffering spouse Anne and Ian McKellen as the Earl of Southampton.
The film takes its title from an alternative name for Shakespeare's play Henry VIII. The film follows Shakespeare's return home to his family after The Globe theater in London is destroyed by fire.
The year is 1613, Shakespeare is acknowledged as the greatest writer of the age. But disaster strikes when his renowned Globe Theatre burns to the ground. Devastated, Shakespeare returns to Stratford where he must face a troubled past and a neglected family. Haunted by the death of his only son Hamnet, he struggles to mend the broken relationships with his wife and daughters. In so doing so, he is ruthlessly forced to examine his own failings as a husband and father. His very personal search for the truth uncovers secrets and lies within a family at war.
On review aggregator website Rotten Tomatoes, the film holds an approval rating of 73 per cent based on 93 reviews, with an average rating of 6.58/10. The website's critics consensus reads, "Impressively cast and beautifully filmed, All Is True takes an elegiac look at Shakespeare's final days." On Metacritic, the film has a weighted average score of 60 out of 100, based on 27 critics, indicating "mixed or average reviews."
Regular $10.00 tickets and Dinner and a Movie $25.00 tickets are now available at The Gentry. There are 34 tickets remaining for the dinner and movie available and 96 regular seats available as well.