Local performer Martin Russell and some of his musical friends are getting into the holiday spirit while preparing for his upcoming Christmas Concert on Dec. 7 at St. Andrew's Church.
Dec 6, 2019 1:55 PM By: Troy Durrell 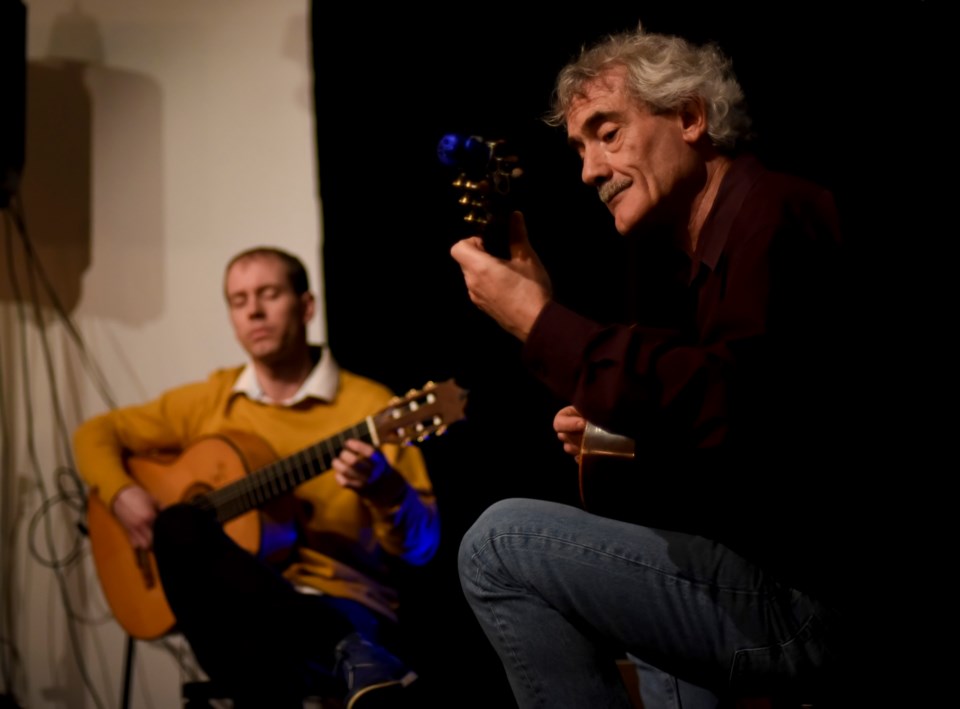 Martin Russell and Jordan Young perform at The Gentry Espresso and Wine Bar in Cochrane on Saturday, Jan. 12, 2019. (Photo by Yasmin Mayne).

Local performer Martin Russell and some of his musical friends are getting into the holiday spirit while preparing for his upcoming Christmas Concert on Dec. 7 at St. Andrew's Church.

The event is free admission with a food bank donation and will begin at 7 p.m.

"Over the years many friends have helped keep me get going," Russell said of the performance he's been putting on for the last 25 years give or take a few. "I was going to take this year off and the friends (musicians that he plays with) asked me not to because they enjoy it so much ... it's not so much hard work for me anymore, it's just me putting the word out to people around town."

Russell said his group which ranges from 15-25 performers plus others who help make the night go on are very helpful in putting on the show for the people of Cochrane.

"They're more than thankful to volunteer ... we have people in the kitchen, looking after the concession, people doing the sound system for the 20 plus musicians and a couple of my students are going to be playing as well," Russell said.

"I've been teaching here (in Cochrane) for as long as I've lived here, so it's just a nice little thank you on my behalf. It's an event full of love and friendship ... I started by myself and I'd run everything but more and more people have volunteered over the years and it makes it that much easier for me."

While there'll be all the classic Christmas songs, Russell said there will be a new addition to the evening.

"We're going to play a few solos but this year we'll be doing a crowd sing-song which is going to be fun," he said. "It's very family-oriented and everyone is welcome to come. There will be around 20 musicians playing with me, divided into three or four different groups so I'll be on stage a lot. I'll be playing some solos on my guitar too."

Donating to the food bank is another important portion of the concert according to Russell.

"Everything, money, and food will be going to the food bank because that's very important," Russell said.

"Not everyone has it as well as us and I'm blessed to have the lifestyle that I do and to be able to afford to play and teach music. It's good to give a little bit back to the community and Christmas is a beautiful time to do that."