Long journey for pianist's first time in a professional studio

You could say playing piano for Mike Holden is fact of life. At 62, he’s been playing piano since he was nine – over 50 years of playing. And Holden is showing no signs of slowing down.
Mar 26, 2015 12:00 AM By: Cochrane Eagle Staff 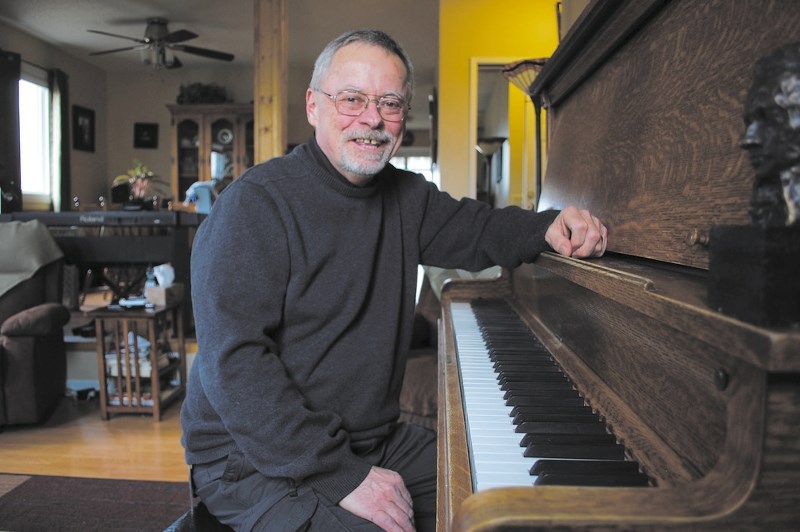 You could say playing piano for Mike Holden is fact of life.

At 62, he’s been playing piano since he was nine – over 50 years of playing. And Holden is showing no signs of slowing down. He’s releasing two back-to-back albums, titled Reflections and Reflections II.

The result of a four-hour-studio blitz session, the albums contain 29 songs – some of them older tracks – which range from a slower, drawn out mood on the first, to a faster pace on the second part.

Recorded in OCL Recording Studio, it’s the first time Holden has recorded in a professional studio.

Located in Chestermere, the studio has seen the likes of Michael Bernard Fitzgerald and Reuben and the Dark. As described by Mike Bell of the Calgary Herald:“ …it’s an astounding, state-of-the-art, multi-million-dollar recording studio that Calgarian Dan Owen built in the country thanks to his booming asbestos removal business…”

The studio session resulted in 40 songs recorded in four hours with his son documenting the experience and then uploading to YouTube – something Holden wasn’t really comfortable with.

“I look kind of stiff. But I was more nervous if anything,” Holden admitted. But watching Holden play, there’s a keen sense of ease and familiarity.

Holden said his mother initially got him interested, but, “I really hated piano lessons,” he admitted.

After a brief break, he later returned to the keys in his teenage years.

Starting off, Holden played the contemporary music of the time – ‘Raindrops Keep Falling on My Head’. But a chance meeting with the cousin of a friend made him shift gears to blues. “Once I started playing that, I quit my lessons right away and played for hours on end,” Holden said.

And he must have shown promised, because Holden recalled a former high school bandmate giving him the honour of composing a song for his wedding.

He said the song was well received, compelling him to keep moving forward with the art.

Another opportunity presented itself in the form of a friend who was opening up a fledging studio out of his basement. It was in that studio basement that Holden recorded his first album.

Fast forward to 2015 and Holden is still as passionate as ever about playing and producing music.

“I think it’s just the thrill of creating. I’ll just fool around on the keyboard and I’ll come up with something, and I think, ‘Wow, I like that!’”

He credits his wife as a “very good critic,” and said if she doesn’t like something, he drops it immediately.