Local author, motivational speaker and marathon runner Martin Parnell is launching his new book titled The Secret Marathon: Empowering Women and Girls in Afghanistan through Sport on Nov.
Nov 15, 2018 1:00 AM By: Troy Durrell 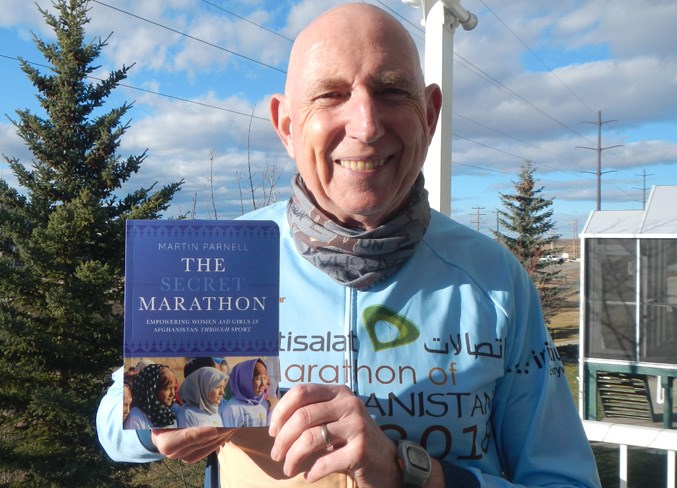 Martin Parnell is releasing his new book with a presentation and signing on Nov. 21 at the Cochrane Public Library.

Local author, motivational speaker and marathon runner Martin Parnell is launching his new book titled The Secret Marathon: Empowering Women and Girls in Afghanistan through Sport on Nov. 21 when he's hosting a presentation and book signing at the Cochrane Public Library. This is Parnell's third book after the releases of Marathon Quest in 2014 and Running by the Edge in 2016.  The Secret Marathon takes the reader on an inspirational journey into a country known for political chaos and female oppression. In 2016, Martin went on an adventure that many believed was madness: running a marathon in Afghanistan in a quest to fight for women's rights and gender equality. "The title really came about because this particular event, this marathon in Afghanistan, when I decided to go I was told I could not talk about the event beforehand. Normally, when you're doing a marathon you tell everybody about it. Here we were told we could not mention it on any social media and we were not told the route until three days before the event due to security," Parnell said of his journey that led to the publishing of this book. "Women and girls have literally had their lives threatened if they run in these marathons. The title of the book really says something when you can't even talk about a race due to security threats to women and girls. Going back to when I heard about this event back in October of 2015 – when I was recovering from a blood clot on the brain – I read about the very first Afghan woman to run a race and how she was physically and verbally abused as she ran through the streets of Kabul. They'd call her names and throw chunks of concrete and rocks at her just to stop her training. People are trying to stop women and girls from running and that's kind of what triggered this whole adventure and led to me writing this book." Parnell felt like it was very important to write and share this book with the people of Cochrane and other surrounding areas. "This is my third book and the final book of the marathon trilogy and this book is different from the other two. It's different because I asked the Afghan women and girls to write sections and chapters about their story," Parnell said. "I had six of them say yes and in this book is their stories. They wanted me to share it and really I'm a conduit for sharing their stories, That's a big change from the previous books where it was generally my journey ... this is their journey. The huge reason for writing this book was to share their story in their own words. They're fighting for freedom and equality and really in a nut shell is why I wanted to get this book out." "I'm from Cochrane. My wife and I have been here for 14 years now and we love it. We just love everything about this town, so I just want to share a part of the journey ... I never thought I'd go to Afghanistan in a million years. That wasn't something I planned and part of this book is very personal. We can all do something and that's kind of my main message. Yeah I went to Afghanistan and ran with the girls but we can all do something locally to make a difference. That's why I wanted to do my presentation, is to let people know that we can all do something." Along with his book presentation taking place in less than a week, Parnell also encourages the people of Cochrane to attend his ninth annual run-walk taking place at Spray Lake Sawmills Family Sports Centre on Dec. 31. The event is used to raise money for the Free to Run program as well as a new program for girls and women in Iraq.