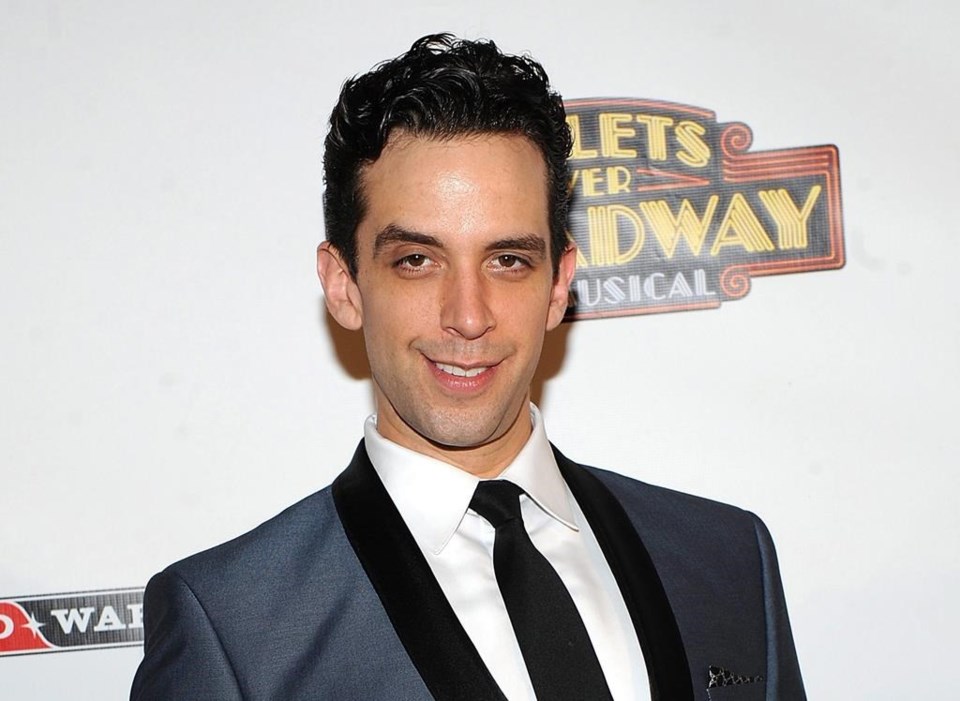 TORONTO — Even as a gangly student in Hamilton and Toronto, Nick Cordero was seen as a big-hearted rock star destined to make a great mark on both the theatre world and his circle of friends.

Those who knew the late Tony-nominated theatre performer are remembering him as a passionate, ambitious and deeply caring actor, singer and dancer whose immense talent and towering presence made him stand out even in his early days in Canada.

"He was six-foot-five and all lungs, all powerhouse singing," says Canadian actor-producer David J. Phillips, a friend of Cordero's who studied theatre with him at Ryerson University in Toronto.

"I know a lot of this stuff sounds cliche at times, but he really was like a rock star. He just was cool and stylish and popular, but with this incredible voice. But on the other hand of that he's this humble, funny, genuine, supportive person who cares and listens and roots for you."

Cordero died Sunday at age 41 in Los Angeles after spending three months in hospital battling a range of issues stemming from COVID-19, according to an Instagram post from his wife, dancer and personal trainer Amanda Kloots.

His case captured the world's attention as Kloots posted daily social media updates on his condition, which was a roller coaster ride of complications, including the amputation of his right leg.

"The one thing that I hope that comes out of this is that people realize that this isn't something to joke around about, or think it isn't that serious or is just for really old or frail people or something," says Phillips, noting Cordero's case made him "paranoid" about the novel coronavirus.

"This guy who's healthy, no pre-existing conditions — he's a singer, he's a dancer, he has healthy lungs and everything — if he can go at 41, then my God, like there's no stopping this thing."

Born and raised in Hamilton, Cordero hit the big time in New York in productions including "The Toxic Avenger," "Rock of Ages," "Waitress," "A Bronx Tale" and "Bullets Over Broadway." The latter is what earned him a Tony nomination and where he met Kloots, who was also performing in the show.

More recently he was starting to carve out a career in Hollywood, with roles on shows including the series "Blue Bloods," and was building a new life in L.A. with Kloots and their one-year-old son, Elvis.

Lou Zamprogna, former longtime director of Theatre Aquarius's summer performing arts program in Hamilton, taught Cordero and cast him in productions including "Evita" and "Chess" for about five years, starting when the aspiring performer was 13.

He recalls him being determined, focused, well-behaved and in love with his craft.

"He listened to every word," Zamprogna recalls. "He was like a sponge soaking up everything you did and said."

Fellow Canadian Broadway star Caissie Levy lived a few streets over from Cordero and his family growing up in Hamilton and studied in the same theatre program as him at Westdale Secondary School. The two stayed in touch throughout their careers and hung out with their spouses and children together.

She describes him as a "wickedly funny" friend and colleague who was "everyone's cheerleader" and quick to lend a hand.

"He was the same guy as a Broadway star as he was as a kid growing up in Hamilton, and I think that's what people loved most about him," Levy says.

"He was just an easygoing dude. Really kind really gracious, really humble — a real Canadian kid. He was a team player, and that's what made him such a great fit for theatre."

When Cordero arrived at Ryerson, he was "on another level" above the rest of the class, Phillips says, noting his swagger, booming voice and turn as guitarist/vocalist in the band Lovemethod.

"It's one of those things where you're like, 'I really like musicals, and I'm pretty good at them. But that guy, that guy's got something beyond,' " Phillips says.

Cordero then moved to New York and Zamprogna went to see him perform in several productions, including "Bullets Over Broadway."

"I remember those moments as clear as day," Zamprogna says. "He'd walk on stage and he would stand perfectly still and you couldn't take your ... eyes off him. He was so fully committed when he was on that stage that the rest of the world wasn't there. And that's what we're all going to miss. I just love the man."

Levy says the second she saw Cordero play mobster Cheech in that musical, she knew he would get a Tony nomination, noting: "He just grabbed it and made it come alive."

Cordero always made time for Zamprogna whenever he visited him in the Big Apple, proudly introducing his former teacher to everyone in the theatre, and taking him out for drinks with Kloots.

Cordero also flew home to Hamilton to perform at a celebration of life for Zamprogna's wife who died unexpectedly.

He would often tell Zamprogna about how grateful he was for helping him as a teen, but the instructor felt he got just as much from his student, who was always "genuinely open-hearted and generous."

"You meet people with ambition, but that doesn't necessarily mean that they're going to be these nice, warm, open people — and Nick was," Zamprogna says, getting choked up with emotion.

"I don't think Nick had a bad word to say about anybody. He just loved the world, he loved life, and he loved this girl named Amanda who he finally married. And this is what makes this so drastic and so devastating what's happened to him."

Like Zamprogna, Phillips says Cordero would also take him out on the town whenever he visited him in New York.

When the two last got together in late February in L.A., where Phillips now lives, Cordero mentioned starting up the new band Creator Destroyer with members of Lovemethod.

And even as his star rose, Cordero was always interested in Phillips' career.

"I think that's why he affected so many people, is that he had so much success himself, but he was always rooting for your success and he never flaunted it. He never had a big ego," Phillips says. "He was just a really genuine, cool guy."

This report by The Canadian Press was first published July 6, 2020.

Surgery to prevent strokes in heart patients recommended worldwide: Canadian doctor
May 15, 2021 7:02 AM