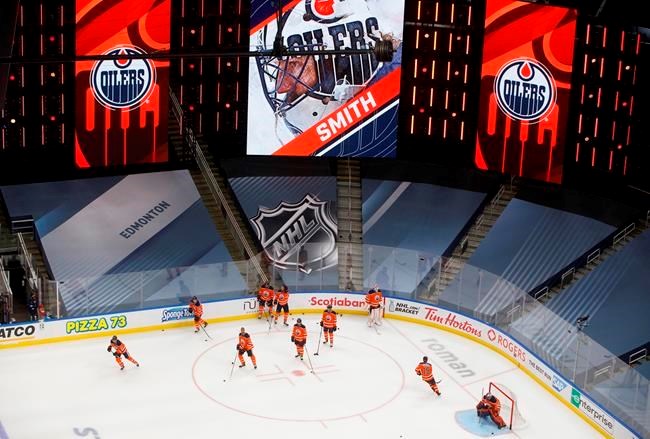 The NHL returned Saturday with new-look television broadcasts that included slick yet subtle changes, creating a fresh visual product that was noticeably different at times and downright quirky at others.

With no spectators in attendance at Scotiabank Arena or Rogers Place due to the COVID-19 pandemic, large screens and lights around the lower bowls created a look that was part television studio and part video game.

NHL-branded tarps covered empty seat sections and 'augmented audio' was used to replicate a crowd soundbed. The overall result found a balance between splashy and familiar without going too far over the top.

"What's interesting here is how COVID is essentially creating the opportunity and the environment in which broadcasters can try things a little bit differently," said Mike Naraine, an assistant professor with Brock University's department of sport management. "(They can) add a couple more pieces to the pie that they wouldn't traditionally have that opportunity to (do) for fear of ostracizing the audience."

The hub format of 12 East teams playing in Toronto and 12 West teams meeting in Edmonton will take some getting used to now that play has resumed. Same goes for exterior b-roll and pre-game locker-room shots.

Viewers tuning into the opening game between Carolina and New York watched a panoramic shot of the Toronto skyline from above the Gardiner Expressway. Definitely not the usual scene-setter ahead of a Hurricanes-Rangers matchup.

Inside the downtown arena, Carolina players gathered outside the Toronto locker-room for stick taps and fist bumps. A Hurricanes banner was positioned over the large Maple Leafs logo on the wall.

The days of rinkside reporters leaning over the boards for interviews during warmups have gone the way of the handshake. NBC broadcaster Brian Boucher was at ice level but provided commentary from a Plexiglas-contained area between the benches.

EA Sports is helping with simulated crowd noise and producers tried it early by adding it during the national anthems. The odd inclusion was quickly forgotten once the action began as the audio bed meshed nicely with the play.

A keen eye would notice that rink board advertisements had some local flavour. The Hurricanes were the home team so the North Carolina-based "Harris Teeter" supermarket logo was featured by the blue line while signage for "Storm Brew," a beer made in Raleigh, N.C., was displayed behind the net.

The NHL oversees the 'world feed' for each game with 32 cameras. Sportsnet executes the feed in Edmonton and NBC, the U.S. rightsholder, handles the Toronto end.

Sportsnet offered some minor differences for its opening game between the Oilers and Chicago Blackhawks later in the afternoon. Camera angles seemed more varied and the additional in-arena screens were featured more often.

The road team felt the love in both venues. Faux celebrations — regardless of which team scored — included blaring horns, enhanced cheering and images of team supporters whooping it up on the scoreboard.

Sportsnet executives have said they plan to experiment at times while aiming to find innovative approaches to the broadcasts.

The network plans to use the "JitaCam" and its 360-degree rotating arm more often. The camera provides unusual angles from its hanging perch underneath the main scoreboards.

The NHL's mid-summer return is a new setup for everyone involved: the league, players and the broadcasters. From a television perspective, expect some tinkering as the qualification rounds and playoffs continue through the summer.

"Doing it well will be the thing that people remember and then it could be the catalyst to project the league even further, both in Canada and particularly in the United States, than ever before," Naraine said.

Edmonton will host both conference finals and the Stanley Cup final, which could last into early October.

This report by The Canadian Press was first published Aug. 1, 2020.