Alberta giving out 20 million more masks, not making it mandatory to wear them 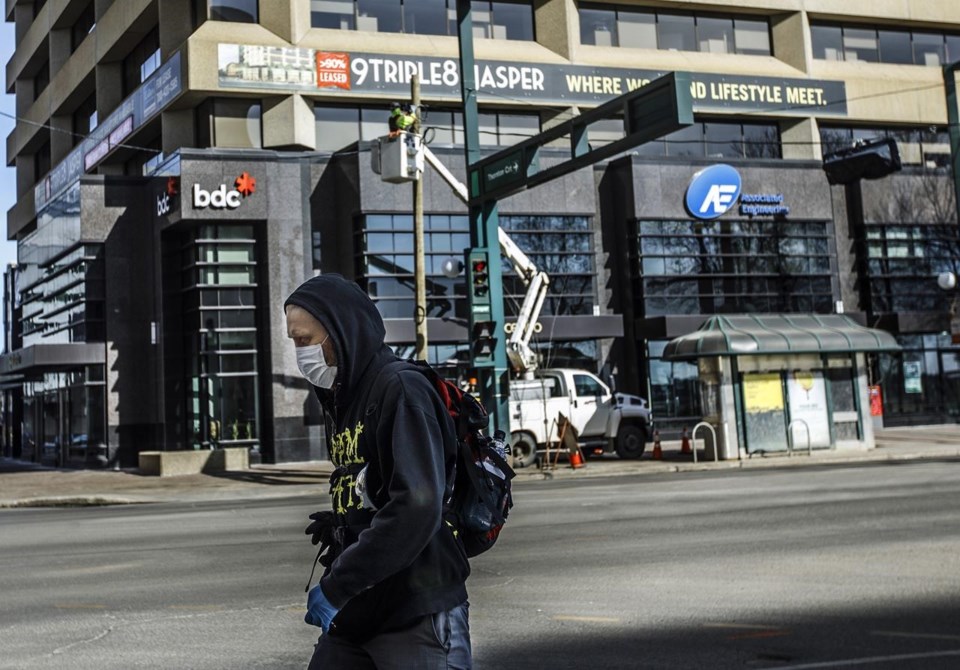 A pedestrian wearing a mask walks down the empty streets of downtown Edmonton on Sunday March 22, 2020. The Alberta government is giving out 20 million more face masks to help stem the spread of COVID-19, but Premier Jason Kenney says it's not necessary to make face-covering mandatory. THE CANADIAN PRESS/Jason Franson

EDMONTON — The Alberta government is giving out 20 million more masks to help stem the spread of COVID-19, but Premier Jason Kenney says it's not necessary to make face covers mandatory.

In the latest batch, nine million masks are to be given out through the fast-food chains, both at counters and drive-thrus, and in packages of eight instead of four.

Four million are to be distributed through municipal transit and 2.5 million have been given to places of worship.

The rest are being doled out at long-term care and seniors facilities, First Nations and Metis settlements, courthouses and other places.

Alberta health officials are encouraging everyone to wear non-medical masks in public when it's not possible to maintain two metres of physical distancing, especially indoors.

"We all have a role to play in this fight. We all have a personal responsibility as Albertans, parents, friends and neighbours to do the right thing and follow the public health guidance," Kenney said Monday.

"Masking is a crucial part of this guidance."

"The vast majority of Albertans, I don't think, need to be told to do the right thing," he added.

Kenney said Alberta had 676 known active COVID-19 cases as of Sunday. There were 45 people with the virus in hospital, including 10 in intensive care.

Hinshaw added that Alberta reported 54 new cases on Friday, 96 new cases on Saturday, and 80 new cases on Sunday. There are more cases with unknown sources than there were a week ago.

Meanwhile, a First Nation in central Alberta was warning that a non-resident member who visited the community tested positive for COVID-19.

The Samson Cree Nation said in a memo posted Monday on social media that it has been told by a community health nurse that contact tracing had begun.

The person was self-isolating away from the community, but efforts were being made to identify anyone who may have come in contact with the visitor in the community or at Ma-Me-O Beach. Anyone who identified as a contact was being tested, and there were currently no active cases in Maskwacis.

The memo said non-essential programs and services were being shut down for two weeks.

"During the closure, all face-to-face meetings are prohibited and the council chambers will remain closed," said the memo. "Please organize all meetings virtually."

This report by The Canadian Press was first published July 13, 2020

— By Lauren Krugel in Calgary. With files from Colette Derworiz in Edmonton