Animal rescue in need of funding 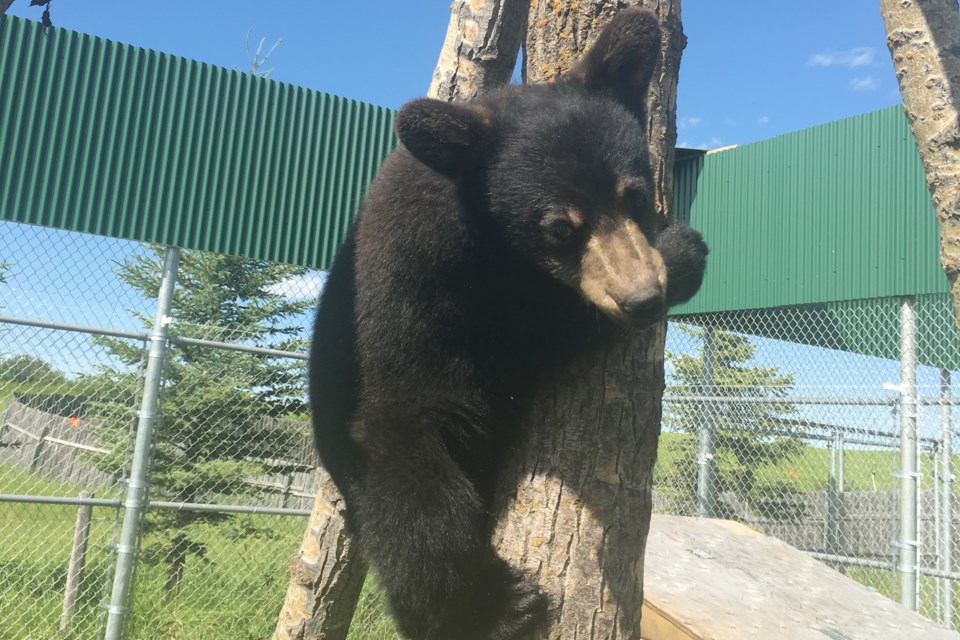 An increase in the total number of patients, as well as high-needs patients like this black bear cub, have left the Alberta Institute for Wildlife Conservation in need of additional resources. Photo Submitted/For Rocky View Publishing

A local organization dedicated to the rehabilitation of injured and orphaned animals is facing an urgent need for funds after exceptionally high intake numbers this year.

This year, Jansen said, AIWC admitted slightly more than 1,150 injured or orphaned animals to its facility located northwest of Airdrie, near Madden.

One particular patient illustrates the need AIWC faces, she said. The organization is currently caring for an orphaned black bear cub – its first in a decade.

“She went through about $200 worth of produce in two days, so she is certainly a very high-needs individual,” Jansen said.

AIWC is also tending to two moose calves – one rescued from the Grande Prairie, after its mother was struck by a vehicle – and two deer fawns with large appetites. Feeding those five patients alone requires tremendous resources, she said, to say nothing of the other patients.

“Currently, we have over 80 patients, which is fairly unusual for this time of year,” Jansen said. “Last year, at this time of year, we were looking at about 40 to 60, so it’s certainly getting very busy here.”

It’s difficult to attribute the increased number of patients to a cause, Jansen said.

Should funding continue to be a struggle, AIWC will need to dig into its reserve funds, she added which could have repercussions.

“As a non-profit, I’m sure you can imagine our reserves are not large,” Jansen said. “So, that might have consequences for next year, in terms of the number of staff we’re able to hire, for instance.”

A lack of funding may also decrease the number of surgeries the organization is able to perform, although Jansen said that would likely be a last resort decision.

Still, she remains optimistic, and said people have been stepping up to help meet the need.

“This is something that we have been very lucky with, in that the public has been so great in responding to our call, but we can definitely use some more help,” Jansen said.

Following the rescue of the moose calf from Grande Prairie – which Jensen said resulted in increased media coverage for the organization – AIWC saw a spike in donations “almost instantaneously.”

Prospective donors can support AIWC, she said, through one of three ways. Certain patients can be sponsored individually, or general donations can be made to the organization. AIWC is also holding a fundraiser – “Workout for Wildlife” – that people can participate in. Information on all three is available online at aiwc.ca

Jensen added anyone not in a position to donate cash could also join the organization as a volunteer, or donate food items for the animals.