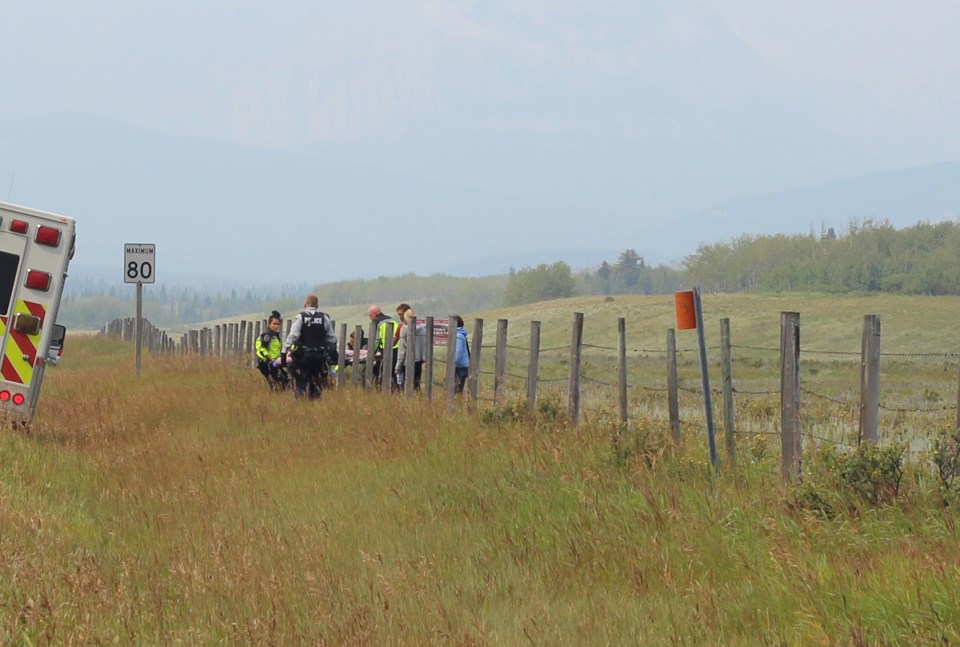 Horst Stewin, a German tourist who was visiting Canada, was shot on Highway 1A in 2018. The trial of the teen charged in the case begins Monday.

A 17-year-old Stoney Nakoda youth is no longer facing an attempted murder charge in relation to a 2018 shooting on Highway 1A.

The accused, who cannot be named under the Youth Criminal Justice Act, was facing 14 charges as a result of the Aug. 2 shooting, but before his trial commenced on Monday (July 15) in Calgary court, the Crown withdrew nine charges, including attempted murder.

Prosecutor Dane Rolfe determined conviction would be unlikely in the charges that were dropped, and continued his case against the accused with charges of aggravated assault, assault and three counts of discharging a firearm with intent under the Criminal Code.

Two of the passengers in the vehicle with the accused, who was 16 years old at the time, testified Monday in front of Judge George Gaschler. Their identities are being withheld so as not to reveal the name of the accused.

One of the witnesses, while being cross-examined by defence counsel Balfour Der, testified the shooting was a case of mistaken identity and that the youth on trial thought he was aiming a gun at someone else when he shot and injured Horst Stewin that day.

Stewin was travelling along the 1A on Aug. 2 last year between Exshaw and Morley with his wife, son and his son’s girlfriend, when the shooting occurred.

“I was scared, I didn’t know what to do,” said the first witness, a 23-year-old female from Stoney Nakoda.

Picked up from her house that day by her cousin and some of his friends (the accused and his brother), the woman said the four of them were just going for a drive to pick up a cellphone, when the shooting occurred.

“All I remember is [my cousin] tell him to shoot and [the youth] said nothing,” she said.

When asked by Crown counsel what happened, she said, “Obviously he shot him.”

“I wasn’t even watching, I just shut my eyes and covered myself. Would you want to see someone shooting somebody,” she said.

The witness said that the occupants of the vehicle could had been drinking alcohol prior to the shooting and it was the driver who noticed the black SUV being driven by Stewin and identified him as someone else.

Under cross-examination, Der asked her how she could have seen his client shoot the gun when her eyes were closed. She said she didn’t know.

When asked if the shot was fired through the passenger window, she said she didn’t remember.

“I was in the backseat. How could I see from behind … when I saw a gun I just closed my eyes, I didn’t want to know or see what was going on,” she said.

At the end of her testimony, when questioned by defence again, the witness said she saw the accused shoot the gun.

Rolfe told the judge as a result of being shot, Stewin was airlifted to Foothills Medical Centre where he spent close to two weeks before being transported back to Germany.

“[Stewin] is paralyzed on his right side and had to learn how to write with his left hand,” Rolfe explained.

The prosecutor also noted the incident resulted in memory issues for Stewin, and said he now has therapy three times a week for his speech and writing.

The shooting left eight bullet fragments in Stewin’s head that were later removed in Germany and sent back to Canada for ballistics testing.

The driver of the vehicle was the second witness to testify on Monday. He explained the group were drinking vodka and doing methamphetamine before the shooting occurred.

The 25-year-old from Stoney Nakoda said the two brothers (including the accused) came over to visit and brought over two guns. They were shooting at a garbage can before they started to run out of alcohol and wanted to buy more, he said.

They picked up his cousin and the witness admitted to being “more buzzed than usual” and driving carelessly.

“I was all over the road … I was just careless, buzzed. [When] I was behind the vehicle I started swerving and revving the engine,” he said.

The driver said as he started to pass the vehicle on the left, he heard a bang.

“It came from the backseat right behind me.”

Noting the sunroof was open, the witness said he saw the youth sit down and when he looked in the rear-view mirror, he saw the black SUV go into the ditch.

“I started to slow down then I heard, ‘What the fuck are you doing?’ and I felt something on the back of my head,” he said.

The 25-year-old told the court he wanted to stop, but he thought he felt a gun barrel on the back of his head, so he kept driving.

The witness said after the group got back to his house, they parted ways and a couple of days later someone asked him on Facebook if he wanted to buy a gun. He said he recognized it as the gun from the shooting and took it and buried it in the woods not far from where the shooting occurred.

The trial is set for two-weeks in Calgary court. For more on this developing story, check out Thursday’s Cochrane Eagle.