Big Hill Springs Provincial Park will be closed beginning in August for the remainder of the season for the construction of several projects within the park boundaries.
Jul 31, 2020 3:00 PM By: Tyler Klinkhammer 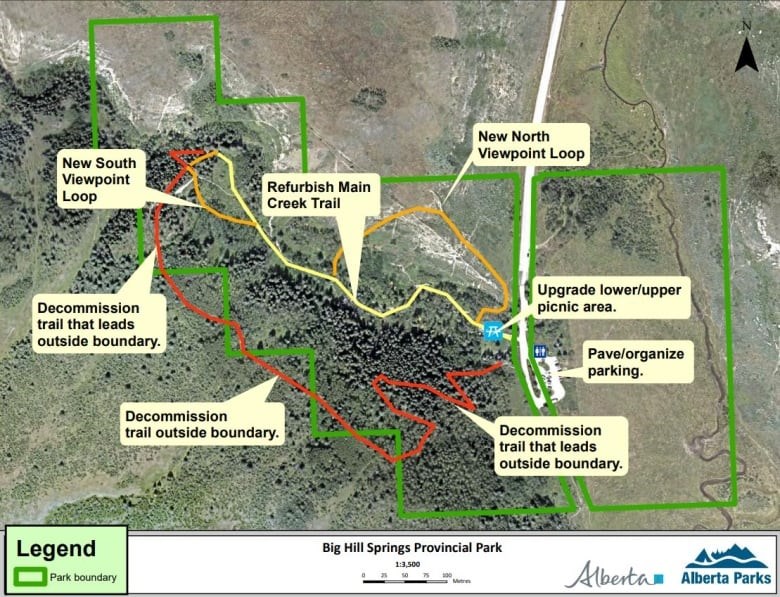 An overhead view of Big Hill Springs Provincial Park shows the projects that will be completed in the park's boundaries.

ROCKY VIEW COUNTY— Big Hill Springs Provincial Park will be closed beginning in August for the remainder of the season for the construction of several projects within the park's boundaries.

The park, nestled in a shallow valley roughly 10 km northeast of Cochrane, boasts riparian features, springs that feed the Bighill Creek, and several waterfalls, the remains of a historic fish hatchery, the ruins of Alberta’s first commercial creamery and hiking paths.

The upgrades come at a time that the park needs a break from public visitation, said Vivian Pharis, vice president of the Bighill Creek Preservation Society.

“It’s just being loved to death by Cochranites,” she said. “We are experiencing now what the provincial park has been experiencing for decades— Too many people in small spaces.”

The Bighill Creek Preservation Society is a volunteer organization that has led the stewardship of the Bighill Creek watershed, part of which flows through the 67-acre provincial park.

The watershed is a unique aquifer because it is spring-fed. The source of the stream is underground, so the temperature of the creek stays fairly constant in both the summer and winter months.

These conditions were likely the reason the historic creamery and hatchery were located there.

As well, with the nearby buffalo jump, it is very likely that First Nations would have camped in the area for the year-round access to freshwater, Pharis said.

“It’s good that this little park is getting attention because it certainly needs it,” Pharis said.

In 2017 Alberta Parks installed a car counter to get an idea of the number of people making use of the park, and estimated that there were roughly 80,000 visitors annually, Pharis said.

One of the most unique features in the park are rock formations called tufa. When springs bubble up to the surface and evaporate, the calcite left behind form these unique mounds of rock.

Pharis said that the tufa rock formations have been damaged by human traffic through the park.

“The tufa formations, that are quite unique—kids like to play on them,” Pharis said. “They can climb up on them and slide down. They’ve just removed all of the natural mosses and lichens and things that were on the face of some of those formations.”

In addition to that damage, Pharis said many of the paths have been widened by foot traffic, revealing the roots of nearby trees that could potentially weaken and die from the exposure.

The Alberta Parks website indicates that the size of the park and the simultaneous construction of all of the visitor amenities require the park to be closed to the public.

Big Hill Springs Provincial Park is expected to open in the summer of 2021 to ensure that the revegetated areas are well established before welcoming visitors back.