“The number of accidents that can happen along local roads because of people not being aware of how to drive cautiously in this type of environment [exists],” Beetham Tilley said. “At this time of year with the new babies around the deer are really concerned with looking after their babies and probably have less focus on the traffic.”
Jun 19, 2021 12:00 PM By: Chelsea Kemp 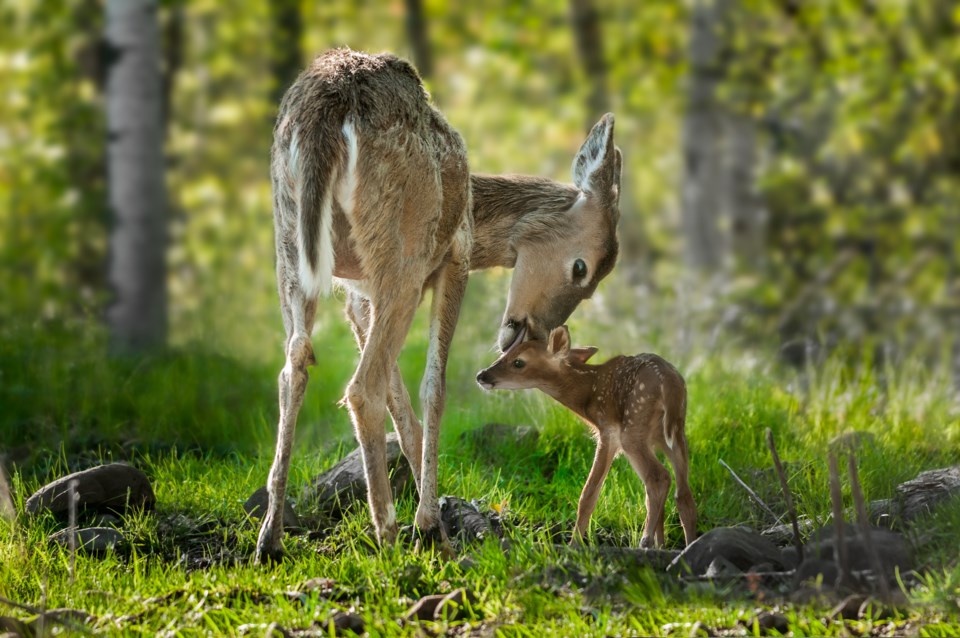 BRAGG CREEK— A local wildlife group is encouraging motorists to slow down and keep an eye out for deer and fawns on the roadway this spring.

Bragg Creek Wild Country has installed signs warning locals and visitors to be aware of deer and fawns on the road when driving through Bragg Creek and the surrounding area, said founding member Sally Beetham Tilley.

“The number of accidents that can happen along local roads because of people not being aware of how to drive cautiously in this type of environment [exists],” Beetham Tilley said. “At this time of year with the new babies around, the deer are really concerned with looking after their babies and probably have less focus on the traffic.”

She said Bragg Creek Wild Country was motivated to install the signs to prevent accidents with wildlife to protect animals and drivers. The billboards have been placed in West Bragg Creek and Wintergreen.

The campaign will last until the end of July.

The spring and early summer can be especially dangerous because deer are often focussed on their young fawns— This can result in behaviour that is not predictable, Beetham Tilley said.

Drivers can often see a mother deer come out onto the road and just stand there because she is waiting for her fawn to follow. Drivers may honk at the animal or attempt to drive around it which can be dangerous.

“We wanted to raise awareness that just because you see a deer, that doesn’t necessarily mean that’s all there is. You need to be aware of the little babies that may suddenly appear,” Beetham Tilley said.

Bragg Creek has seen an influx of tourism in the past few years and this can lead to visitors being unfamiliar with the wildlife in the area and steps they can take to help mitigate interactions and accidents with wildlife.

Bragg Creek Wild Country was launched in reaction to the amount of animal-human conflict in Bragg Creek and the surrounding area, especially on the roadways.

The group hopes the newly installed signs warning of fawns in the area will encourage visitors and locals to be on the lookout for wildlife looking to cross the road.

“I think that the signs are a good reminder for people,” Beetham Tilley said. “If they are aware that it's happening in that area of the road, they are more likely to pay attention to the speed limit.”

Beetham Tilley said to assume if a driver spots one deer there are more in the area. She added there have been reports of moms with twins in Bragg Creek this summer.

Speeding can be a major safety factor in the Bragg Creek area, she said, but being vigilant and checking for wildlife on the road and in ditches is another important factor.

Wildlife can blend into the landscape, especially during dawn and dusk when they are most active, so being aware is key.

“The animals can jump out so suddenly,” Beetham Tilley said. “This time of the year is an especially prevalent time of year for those sorts of accidents.”

Beetham Tilley said they do not recommend honking a car horn to get a deer to move as this can result in the animal freezing due to overstimulation.

While it is important to watch for deer and fawns while driving, Beetham Tilley said, the hope is the messaging from Bragg Creek Wild Country will spur drivers to look for all types of wildlife. Other animals, including moose calves, are also very active this time of year.

If you are involved in a car accident with a deer contact Fish and Wildlife if the animal appears to be injured or causing a hazard on the road. Call 403-310-0000 to connect with an officer.