“We didn’t expect it, but we are so grateful … The Cochrane community is awesome,” Bautista said. “We are young entrepreneurs— The humble support from the community here has been so great.”
Oct 17, 2020 12:00 PM By: Chelsea Kemp 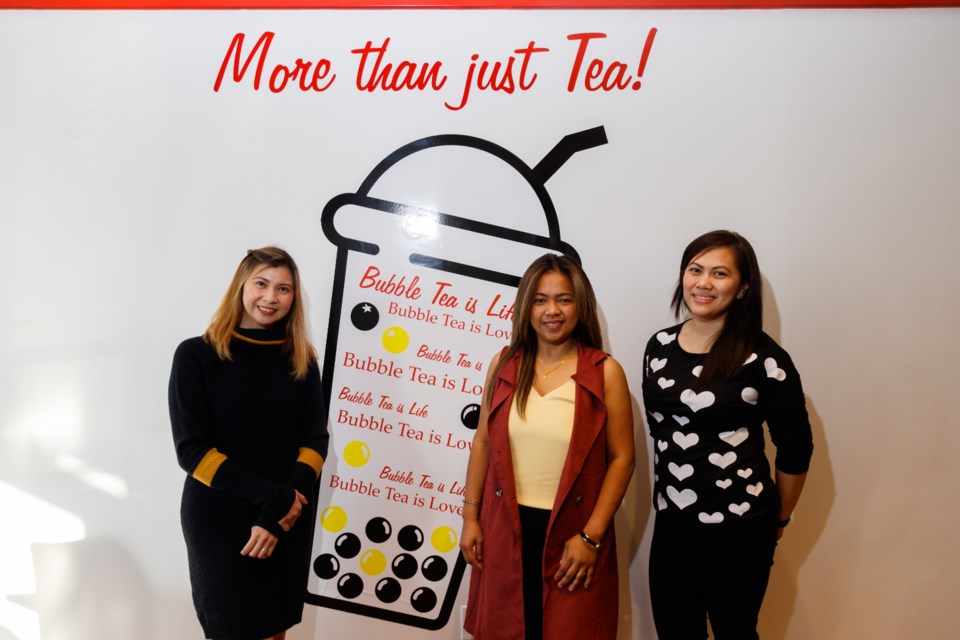 COCHRANE— Introducing one of their favourite treats to the Cochrane community, a trio of first-time entrepreneurs have launched Bubble Tea Brewers.

Mediatrix Grace Dayao, Monica Bautista and Joy Grace Castillo have been friends for more than a decade.

They found each other when they first moved to Cochrane around 2008.

When the trio arrived in Cochrane from the Philippines they had only their luggage in their hands and a head full of dreams, Dayao said with a smile, and it has been amazing to find their place and in the community.

The trio talked about launching their own business in Cochrane for many years— Two years ago they decided it was time to bite the bullet and create a business they could call their own.

Bubble Tea Brewers is their first time starting a business and it has been an exciting and nerve-wracking experience, Bautista said, but it helps they were able to launch the shop as friends.

The trio credits their success to three important lessons— patience, positivity and trust.

It was thrilling when they began planning to open Bubble Tea Brewers, starting with looking for the best possible Cochrane location in early 2020.

“We were looking at locations in -30C,” Dayao said with a laugh.

Bautista estimates they looked at more than 20 locations before finding their current space at 122 4 Avenue.

They had an “instinct” when they toured the location, and knew right away it was the perfect spot for Bubble Tea Brewers.

They were eager to get to work when they found their home, and from the moment they stepped in the building they had a vision of the shop they wanted to create, Bautista said.

The trio planned every single detail down to the screws they used during construction, Dayao said with a laugh. She added they would lie awake at night planning and thinking about inspections and designs of their new business.

The feeling when they opened the doors to the public for the first time was indescribable, Castillo said, adding the three of them had tears of joy in their eyes on the first day.

However, opening their doors was not without its challenges, Castillo said, especially because they chose to launch during COVID-19.

Bautista praised the Town of Cochrane for the assistance they provided during construction to ensure they were on the right track to open for the summer.

The support they have received from Cochranites since opening has been amazing.

“We didn’t expect it, but we are so grateful … The Cochrane community is awesome,” Bautista said. “We are young entrepreneurs— The humble support from the community here has been so great.”

They were a little hesitant at first to open a bubble tea business in Cochrane, Castillo said, because they were worried people in the community would be unfamiliar with the drink.

Luckily, bubble tea has proven to be incredibly popular.

Bubble tea is a refreshing tea drink traditionally served with tapioca pudding pearls. The pearls are paired with sweet drinks featuring different fruit flavours. There is a rich variety of flavours and jelly pearls that can be mixed and matched.

Bautista said they typically recommend the traditional brown sugar series for those new to the drink.

“That’s the one that really represents the milk tea. It’s sweet and it’s the pearl is chewy and tastes like tea,” Dayaos said.

Castillo added she likes one of the more healthy options, their fruit smoothies.

Bubble Tea Brewers also have food on the menu including the signature Japanese street food takoyaki.

For now, they are focused on learning from the launch of their first business, Dayaos said, and want to focus on providing great customer service as they build momentum.

Now that they have their feet on the ground, Bautista added, they hope to one day expand and open new locations including potentially in Canmore or Banff.

“We love bubble tea,” Dayao said with a smile.