Campers at Camp Adventure will no longer have to cook and eat food in a messhall that is older than most of their parents after a new facility was unveiled May 26.
0
Jun 1, 2017 12:00 AM By: Jenna Dulewich 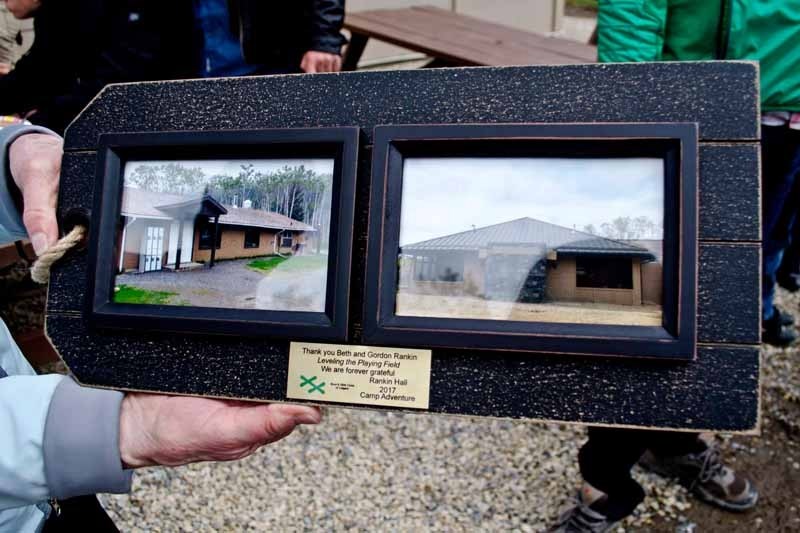 Beth Rankin, donor of the new Rankin Hall at the Boys and Girls Club of Calgary Camp Adventure shows off her gift at the unveiling ceremony on May 26.

Campers at Camp Adventure will no longer have to cook and eat food in a messhall that is older than most of their parents after a new facility was unveiled May 26.

“Last year, the hall was small and worn down,” said camper Donovan Gaudreault, 12, who has been attending Camp Adventure for half of his life.

“When we heard we were getting a new hall everyone got excited.”

The benches were full at Camp Adventure last Friday with campers, Boys and Girls Club staff, builders and executives as staff of the new 3,800-square-foot building opened the doors inviting everyone to take a peek at Rankin Hall.

“I wanted to help children,” said Beth Rankin, Calgary resident and generous donor to the project.

Located at Sibbald Lake Provincial Campground, Rankin Hall has been a two-year project in the making for the Boys and Girls Club of Calgary (BGCC).

“It’s really exciting – last year the cookhouse was small and worn down … this one is a lot bigger with more room and better layout,” said Dylan Oosterveld, director of clubs and experiential learning.

When staff learned about the funding, Oosterveld said the decision to rebuild was made after receiving cost estimates to renovate the original 1964 building.

“We realized the cost to renovate the building was really high – plus we’d still be in the old building,” Oosterveld explained.

After the old messhall was torn down, construction started last October on the approximately $1.5-million project.

Now that the messhall is officially open it will benefit campers and be available for rent to the public.

“We can now run year-round – that expands our ability to offer hall rentals,” Oosterveld said.

The camp is used by the Boys and Girls Club of Calgary youth, and accepts campers from the surrounding area communities such as Cochrane and Airdire. While there is a cost to attend the camps, donations and money from the hall rentals help to subsidize the rate to make the fees affordable.

Rankin, who has funded similar projects in the past, said she was inspired to donate the money for Rankin Hall as a way to create a “level playing field for children.”

“I am thrilled with the (hall) and my late husband would be too,” Rankin said.

The Rankins have been donors to the BGCC for the last 17 years. They are best known for the project they first started in the early 2000s to purchase bikes for children who attend community clubs.

In an annual report by the BGCC, it stated the Rankins left it up to the parents to decide to say who the bikes were from.

While Rankin funded most of the $1.5 million for the Rankin Hall project, the Alberta government pitched in a grant of $125,000 from the Community Facility Enhancement Program (CFEP).

The new building includes an eating area (that has the option to be heated year round), a kitchen with two full-sized walk-in coolers, solar panels and indoor washrooms.

“The dining hall is where we all come together after our activities – everyone looks forward to or time together eating and talking about what will happen that day or what we did. Now, thanks to Mrs. Rankin, we will have a brand new dining hall to create future friendships,” Gaudreault said during his speech at the unveiling ceremony.

The Airdrie tween said he looks forward to going to camp every year because of the archery program, the campfires, making new friends, and eating in the new messhall.