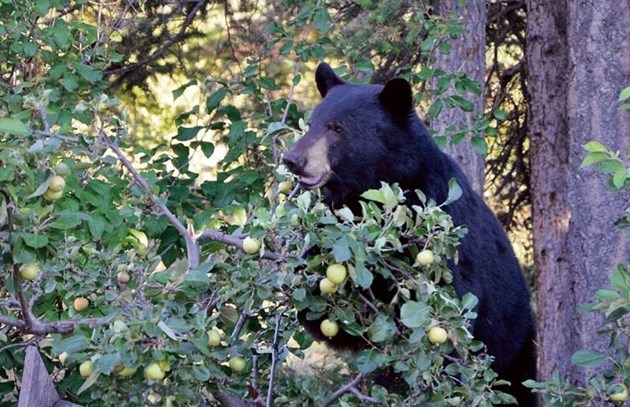 A black bear eats crabapples from a tree in a residential area. RMO file photo

CANMORE – Residents who don’t remove fruit from their trees or have birdfeeders on their property could now face a $250 fine.

Council unanimously agreed to increase the fine from $100 to $250 as part of a larger wildlife attractant management plan that it approved on Aug. 20.

The amended bylaw specifically targets three types of fruit trees, including but not limited to, crabapple trees, mountain ash trees and shepherdia bushes, also known as a buffaloberry bush.

Lori Rissling Wynn, the Town’s sustainability coordinator, said the increased fines along with the new wildlife attractant management plan would compel homeowners to either remove the fruit from their fruit trees or cut the tree down in order to reduce the number of bears that wander into Town looking for food.

“The first interaction is not going to be a ticket,” said Rissling Wynn, explaining bylaw officers will work with residents to ensure they are in compliance with the bylaw.

To help residents comply with the new rules, the Town intends to implement an incentive program to cover 50 per cent of the cost to remove a tree for a maximum of $300.

She said the Town will also do its part by identifying fruit trees located on public property in 2020 before developing a multi-year plan to remove them.

“The plan would be to remove trees from high risk neighbourhoods on the periphery of town, and then move into lower risk, lower priority areas,” said Rissling Wynn.

Mayor John Borrowman said he was pleased with the new wildlife attractant management plan as well as the steeper fine.

“We have to be clear in speaking to the community that this is something that we are committed to as a community to protect the wildlife in the area and make some personal sacrifices,” said Borrowman.

“It doesn’t wash for me to go on talking about what an environmentally aware and active community we are and then turn around and not put in place the actions that are required to make that a true statement.”

He said he wouldn’t hesitate to increase the fine if residents don’t comply.

“If after a couple of years we don’t see a very significant improvement in how wildlife attractants are handled or managed in the community, then I think council should ramp up the penalties.”

To help enforce the management plan, Rissling Wynn said bylaw services will conduct a service review in 2020 to determine whether or not it has enough resources to enforce the new rules or if it will need an additional peace officer in 2021.

If an additional officer is required, she said the officer would be solely focused on enforcing the bylaw, dealing with the Town’s feral rabbit management program and other human-wildlife conflicts, such as off-leash dogs.

She said the officer could also be trained to remove wildlife from within urban areas of the Town, however before that could happen there would have to be discussions with the province.

Rissling Wynn told council the additional position would cost $110,000 per year as well as $50,000 for a new bylaw services vehicle.

As part of the enforcement plan, she said the Town also intends to develop a memorandum of understanding with TransAlta and Three Sisters Mountain Village in order to enforce the new rules on private property.

Rissling Wynn said the management plan also includes a heavy emphasis on education, improving signage around the off-leash dog park at Quarry Lake and ensuring other Town policies are aligned with the new plan, such as prohibiting developers from planting fruit-bearing trees.

Coun. Vi Sandford said she was concerned that by passing the bylaw now, the Town would be in violation of its own rules. She said she was also concerned that including mountain ash trees in the bylaw would catch a lot of residents off guard who might not be aware that the tree is considered a wildlife attractant.