“It attracts a different person. Yes, the locals from Cochrane come to the trade show, and they’re more than welcome, but also there are people that come from all over the place, whether it be Cremona, or Bragg Creek or Redwood Meadows, communities like that. They come into Cochrane and they go to one of our restaurants, or one of our stores as well."
Apr 6, 2021 3:00 PM By: Tyler Klinkhammer 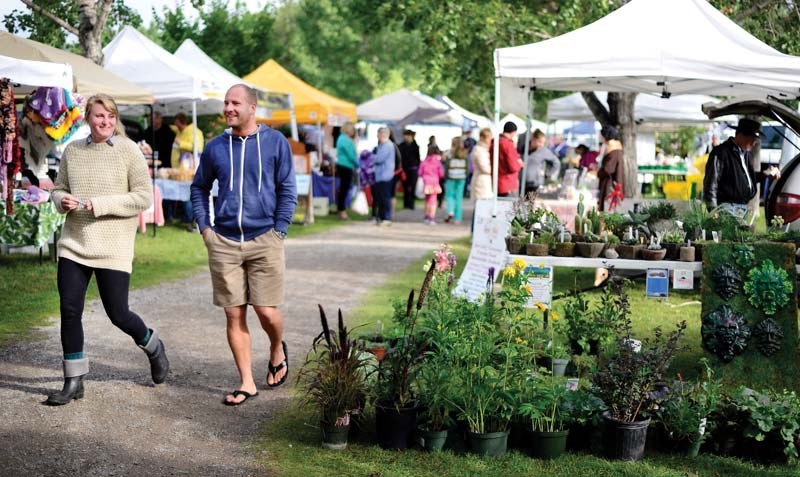 Markets and trade shows offer small vendors the chance to attract a high volume of customers is a short time. File Photo.

COCHRANE— The Cochrane and Area Chamber of Commerce has moved the date for the Cochrane Trade Show from the beginning of May to June 26 and 27.

“In AHS’s guidelines, Stage 4 is the only Stage that we could have a trade show in. Currently, we haven’t even reached Stage 3 of that reopening plan and we felt as a board that if it didn’t open soon enough, we wouldn’t be able to put it on properly,” said the executive director of the Cochrane and Area Chamber of Commerce, Kelly Carson.

Without reaching Stage 4 of the province’s reopening plan, the trade show could not allow in a high enough volume of visitors to ensure that the value of the event was sufficient for the vendors in attendance, Carson explained.

“If there was going to be a minimum amount of people that could come it would not be viable for them to want to be part of the trade show,” he said. “We hope that when phase four does come it will open to a reasonable amount of people. We anticipate that it will be 25 per cent of fire code capacity for Spray Lakes arena, which would be fine with us.”

At that level the value would definitely be there for the vendors, Carson said.

The Cochrane Trade Show has historically attracted roughly 170 vendors and sold out every year.

Carson said he hopes to see at least that many attend this year, and noted that the Spray Lake Sawmills Family Sports Centre has a lot of room for expansion.

Many of the arenas that would usually have athletic programming taking up space will be empty this year, and Carson said if the event does need extra space there is plenty of it at the sports centre.

Carson said the Chamber of Commerce is also considering including an outdoor section in the parking lot of the arena, hoping to attract food trucks to the trade show.

The trade show is an important source of revenue for a lot of Cochrane’s small businesses, many of whom rely on trade shows to attract a customer base.

“The type of people that we attract in there are people that don’t have a storefront,” he said. “They need trade shows to thrive in the community, and they need people to walk by … Those types of vendors need those types of things and we want to be here for them.”

Not only does the event attract people directly to the trade shows, but the town of Cochrane, as a whole, benefits from the increased traffic as well, Carson said.

“It attracts a different person. Yes, the locals from Cochrane come to the trade show, and they’re more than welcome, but also there are people that come from all over the place, whether it be Cremona, or Bragg Creek or Redwood Meadows, communities like that. They come into Cochrane and they go to one of our restaurants, or one of our stores as well,” he said.

Carson said he expects to see a lot of people turn out to the trade show, but noted that it is hard to put a number on attendance that would indicate a successful event.

The success of the event will be largely determined by the provincial health regulations in place at the time of the trade show. If the province allows for 100 people to be in attendance, and 100 people show up, that would be a sold out, and thus successful show, Carson said.

No matter how many people the province allows for in June, the goal is a sold-out show, Carson said.

“Whatever that number is, we’ll get there, we’ll do our best to get there,” he said.

Because putting a target on attendance numbers is difficult to plan for right now, success might have to be determined by the vendors, Carson said.

“I guess the success will come from the vendors that say ‘you know what, I did well,’ because that’s the most important thing,” Carson said.

The Cochrane and Area Chamber of Commerce provides many benefits to small businesses in town, including its new Professional Services Grant Program.

The Chamber has partnered with the Town of Cochrane to offer a $500 grant to help cover the cost of any small business that has enlisted the help of a professional to apply for provincial or federal relief programs on or after March 9.

To find out more about the program, the Cochrane Trade Show or other programs, visit cochranechamber.ca/.