The Chamber is still deciding if they will engage with the provincial program offering COVID-19 rapid test kits, said executive director Kelly Carson said, noting the necessity for the equipment is not as dire as it once was.
Jun 10, 2021 5:00 PM By: Chelsea Kemp 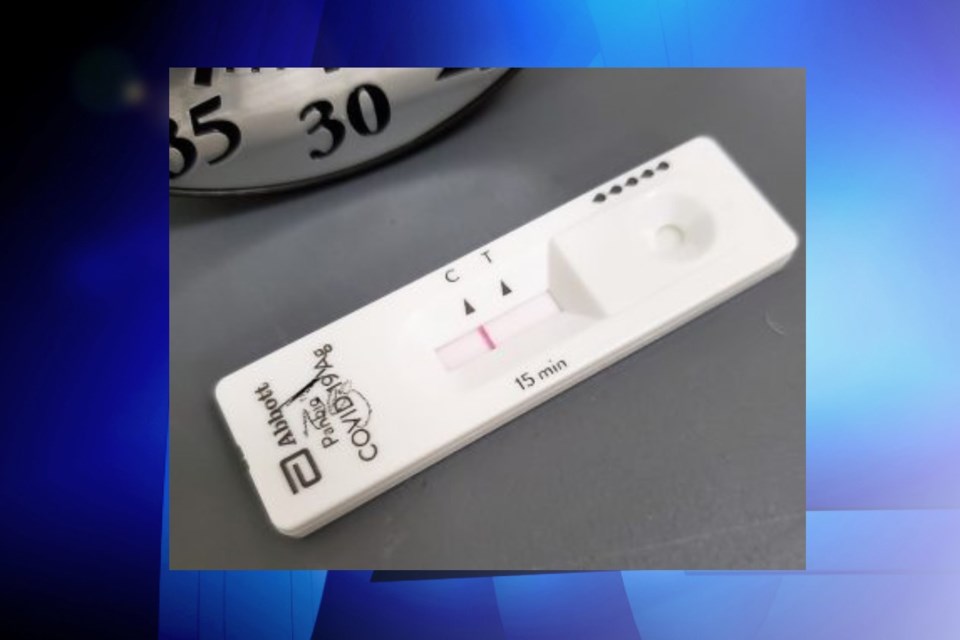 The provincial government has made rapid test kits available to Chamber of Commerce across the province. Submitted Photo

The Chamber is still deciding if they will engage with the provincial program offering COVID-19 rapid test kits, said executive director Kelly Carson said, noting the necessity for the equipment is not as dire as it once was.

“We're still in the process of trying to figure it all out,” Carson said.

The Chamber is in discussions with the Alberta Chambers of Commerce regarding the potential rollout of rapid tests in Cochrane.

The Chamber was awarded the chance to roll out test kits in May, he said, and they are hoping to learn more about what the distribution of tests will look like.

Members of the Cochrane Chamber of Commerce have been meeting with the Alberta Chambers of Commerce to better understand the rollout and the logistics of rapid tests for local businesses.

“Some towns that went in right off the bat were absolutely overwhelmed because everybody wanted them,” Carson said.

While the province's move to provide rapid tests in support of local businesses is appreciated, the details on the logistics and distribution remain scant.

Carson said to date about 15 municipalities have taken on the rapid test kit project, and shared information on their first week of distribution at the Alberta Chamber of Commerce meeting on Tuesday (June 8). He hopes these conversations will add more clarity to the experience for chambers like Cochrane that are hoping to participate in the rollout of tests.

He added there are concerns the rollout of rapid testing kits will also prove to be a logistically challenging task.

Carson cited the Town of Jasper as an example. Jasper was the first municipality to use the available rapid testing kits adding around 12,000 tests to its roster. Carson said the Chamber of Commerce in the town was soon overwhelmed with the demand for kits given the robust hospitality industry in the area.

The number of available tests was critical, he said, because as part of the distribution of kits Chambers are required to sign an agreement indicating how long tests will be distributed and report the results. Chambers will be required to keep a detailed list of who is tested and where people are tested that can be provided to the provincial government.

He added several pharmacies in Cochrane sell rapid testing kits and the Chamber is working to ensure the rollout will not impact them.

Carson noted the province and Cochrane are in a very different position than when the tests were first made available. In May COVID-19 cases and hospitalizations were high, while the availability of vaccines and rapid testing was not as readily available.

“We were in a terrible situation in Alberta, and that is no longer the case,” Carson said. “It’s changed so dramatically.”

Vaccines will remain important in ensuring the health care system is not overwhelmed, and as COVID-19 case numbers continue to decline rapid test kits may no longer be necessary.

He noted businesses will face increasingly rapid changes going into July as the province fully opens, and these experiences may render the need for rapid test kits moot.

At this point, Carson is unsure if the Chamber will move forward on rapid tests. A meeting of the board will take place on Thursday (June 10) to decide on the next steps in the project.

The Cochrane and District Chamber of Commerce is working on other programs designed to support local shopping in Cochrane. He added the business community is eager to see reopenings take place and the promise of economic stability and jobs.

“It will be great to see everybody back on their feet,” Carson said.