“It was something that we also talked a lot about— That Cochrane, or even Alberta needs a really good poutine in town. We decided to stick with what we know and what we liked."
Apr 17, 2021 12:00 PM By: Jack Carter 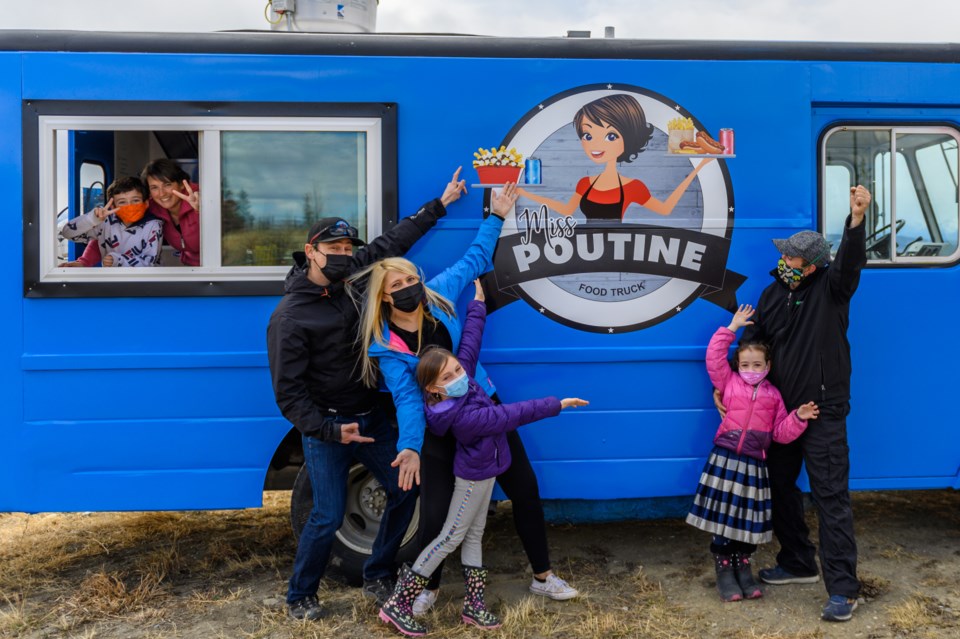 The two families behind Miss Poutine food truck pose with the truck in Cochrane on Sunday (April 11). (Photo by Jack Carter/The Cochrane Eagle)

Marie-May Bailly, one of the four partners operating the food truck, said they are hoping to open to customers in town starting at the end of April, with a soft launch taking place before its official opening to the public.

The bright blue truck is currently undergoing final tweaks and is sitting ready and waiting for its opening day.

The body, a 1982 Grumman, needed some work and a fresh coat of blue paint before it was ready to begin its transformation into the Miss Poutine food truck.

Bailley, a WestJet employee, said she has not been flying for a year due to COVID-19. The resulting break from work inspired her to explore different opportunities.

“I kept saying, to lots of people, that one day I'm going to start a food truck.”

Friends, and now partners of the food truck, Eric Brassard and Karina Labelle, were interested in the idea as well.

“We started really talking about it, we started looking for a food truck. And then within I think a month, we actually purchased a food truck and we were on our way to our new adventure.”

The four Miss Poutine partners met through their children.

“My son and their daughter, they're in the same class … They liked to hang out together and then so parents start talking to each other and then we became friends. We went camping, we did a few things together. And then we start talking about business. And here we are.”

Bailey and her husband Danny, alongside Eric and Karina, hail from Quebec. Their home province played a pivotal role in inspiring the launch of the food truck.

“It was something that we also talked a lot about— That Cochrane, or even Alberta needs a really good poutine in town. We decided to stick with what we know and what we liked,” she said.

The menu will feature different kinds of poutine. So far, smoked meat poutine, a bacon poutine, the classic and Italian poutine can be expected.

Bailey added that they have a secret surprise on the menu that they are eager to reveal to the public when the food truck opens.

The Miss Poutine food truck will be based in Cochrane with some proposed locations being the Riverfront Park or the skate park.

Down the road, the food truck hopes to attend events in Calgary and Airdrie, but for now, will be offering their poutine to those in and around Cochrane.