“Half of what we do is super unpredictable. You have the best-laid plans and all of a sudden everything goes wrong because that fire extended into an area you didn’t know about and now you need to get out."
Nov 27, 2020 3:00 PM By: Tyler Klinkhammer 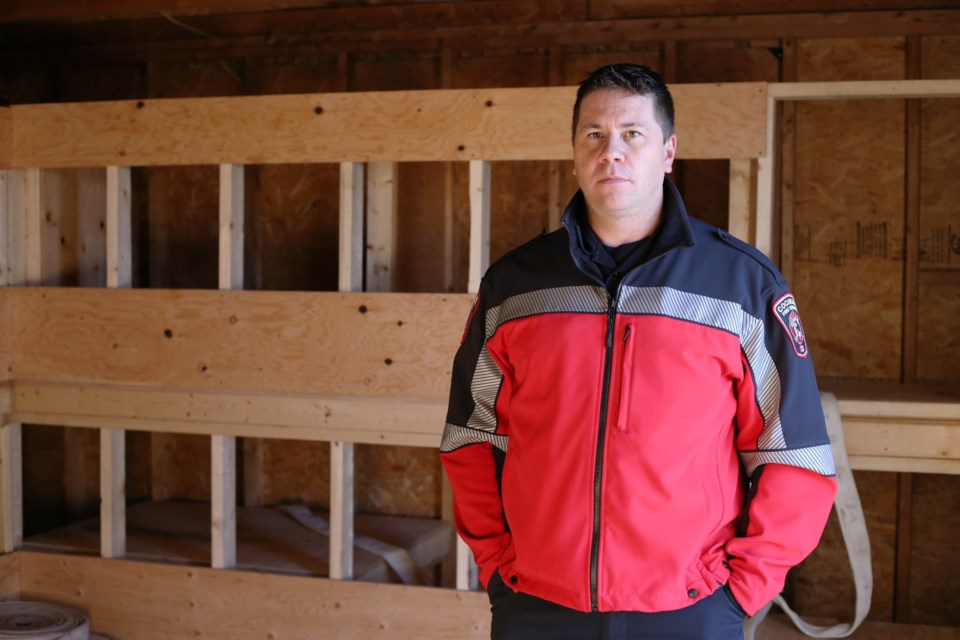 COCHRANE— Cochrane Fire Services recently finished construction on a new facility that is designed to teach its members the lifesaving skills they need in emergency situations.

A confidence maze is a tool used by fire services to teach members how to escape from structures in times when visibility is low, heat is high and time is of the essence.

Fire service members enter into the maze in one of several starting locations and make their way through a series of obstacles designed to inhibit movement, catch equipment, and create confusion.

Sections of the maze can be altered to change up the maze so members do not get accustomed to any route through it.

The members will enter the maze in full turnout gear, often with their masks blacked out to impair vision, mimicking a smoky, low light environment. The average weight of a Cochrane Fire Services members kit is roughly 60 pounds.

The training facility was designed using real-world scenarios, some of which were the cause of death for the emergency responders that were involved, said Cochrane Fire Services Lieutenant of Training Chris Chyka.

“On April 11, ‘94, two firefighters were killed. One of the victims was found nine feet from the exit tangled in television cable and wire that had fallen to the floor from the roof due to extreme heat,” Chyka said. “They got tangled up in these wires and they couldn’t get up. It was just like being caught in a spider web. They had no cutters and they couldn’t do anything— Nine feet from the exit.”

These scenarios have changed the way that fire service members train, and the equipment they carry.

The framing of the maze is built to standardized construction measurements, which is one of the first things firefighters in training learn, Chyka explained. This allows the members-in-training to practice moving through spaces that they will encounter in actual structures, like the spaces between wall studs.

Members move through the spaces in a prone position, as the air along the floor can often be several hundred degrees cooler than the air near the ceiling in structures during a live fire.

Some of the areas require the members to remove some equipment to squeeze through, which gives them an opportunity to learn how to do so safely.

Cochrane Fire Services employs a number of techniques to ensure member safety when they arrive on scene, but using the skills learned in the confidence maze gives them another set of tools to deploy if a situation inside a structure becomes dire.

“We try to be safe every time we enter a dwelling. We do a 360 around the building, try to identify where we can actually bail out if we have to, so we try to develop a preplan before we go in,” Chyka said. “But so many things can go wrong. We never truly know where the fire is all the time, especially if it’s gotten into the ceiling and it’s crawling this way or extending beneath us or beside us.”

Fires can be very unpredictable, Chyka said. A blaze can spread rapidly if it is exposed to a source of oxygen— Sometimes in a matter of minutes.

“Half of what we do is super unpredictable. You have the best-laid plans and all of a sudden everything goes wrong because that fire extended into an area you didn’t know about and now you need to get out."

Not only does the new training facility offer a chance for members to practice life-saving skills, but it offers significant cost savings to the department as a whole.

Some of the facilities there cost upwards of $1,000 a day to rent.

The facility the Cochrane Fire Service recently built cost roughly $3,000 in lumber, and several donated man-hours from its members.

Members who train at the new confidence maze do so in full turnout gear, so if a call comes in during training, they are ready to go at a moment's notice.

The focus of this year at Cochrane Fire Services, Chyka said, has been on improving its membership’s fundamental skills.

“Strong fundamentals allow for us to provide better services to the citizens of Cochrane,” he said. “On top of that, it also allows us to protect ourselves and gives us the tools to get out of some pretty austere conditions.”

The focus of the maze is to build confidence in those who run through it, Chyka said, hence the name.

“A better firefighter is one who comes out of here confident. That will translate out to when we’re trying to suppress a fire. We’re trying to change our mentality on how we train, and that’s building confidence instead of nitpicking every little thing,” he said. “That’s why we call this the confidence maze. We want people leaving here feeling good about themselves because of all the things we do, this one could save your life.”