“We’re really excited to have this new piece of apparatus on the floor and supporting our community needs."
Sep 20, 2020 3:00 PM By: Chelsea Kemp 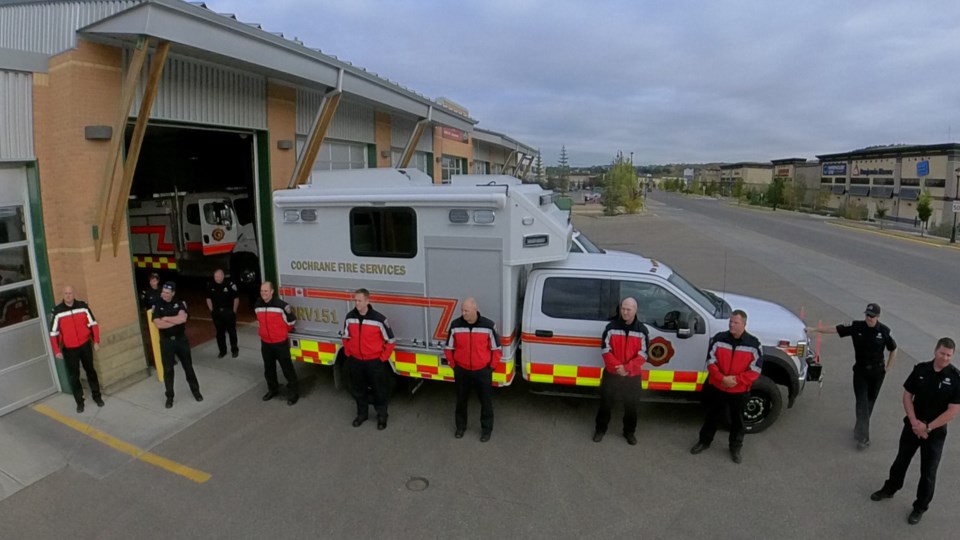 COCHRANE— A new emergency vehicle has been inducted into the Cochrane Fire Services department.

Cochrane Deputy Fire Chief Shawn Polley said the new Rapid Response Vehicle 151, known as RRV151, was delivered to the fire department a couple of weeks ago and a push-in ceremony was held on Tuesday (Sept. 8) ushering it into the fleet.

The push-in ceremony is part of a rich tradition of fire services history, Polley said.

“Back in the day when we had horse-drawn hose carts ladder wagons and fire engines they used to be pushed hauled by horses. When the crews would actually return from their fire event," Polley said. "They would unhitch the horses and then the crew would actually push the engine ... Back into the fire hall."

Cochrane Fire Services, which dates back to 1909, uses the ceremony as a way of honouring the rich traditions of the department.

“It’s a direct tie back to our ancestors,” Polley said. “It’s a simple way of bringing the membership together.”

RRV151 was quickly put to work the first day it is was in service responding to a medical emergency call.

Polley said the project to secure RRV151 officially started in 2018. The contract for the truck was awarded to a local Calgary vendor and the box that sits on the chassis of the service board was won by InterContinental Truck Body based out of Coaldale, Alta.

RRV151 is a four-wheel-drive crew cab vehicle and increases the capacity to take members to training exercises or emergencies.

Inside the vehicle boasts full headset communications for members so they can hear events as they travel to a call.

The truck will be one of the busiest members of the fleet, Polley said, explaining it will attend about 500 calls a year.

“We’re really excited to have this new piece of apparatus on the floor and supporting our community needs,” Polley said. “Another big part of what this truck will do is it’s a technical rescue platform.”

The technical rescue program is anything non-fire related, Polley said, explaining that it is focused on the rope slope, water, swift water and ice rescues that can take place.

“It may be a motor vehicle that’s gone over a guardrail and down an embankment here in Town and we would need to put together a technical rope rescue operations so we would be able to safely get our members down to the car and work with the patient to bring them back up,” Polley said.

In total. the Fire Services fleet has 12 pieces of apparatus used by 47 members. The last vehicle to enter the fleet was a rescue pumper in 2018.

Polley added it was especially meaningful ushering in the new apparatus as Sunday (Sept. 13) was Firefighters' National Memorial Day.

The day is a solemn one, he said because it serves as a time to reflect on those who have died in the line of duty.

Polley said to his knowledge Cochrane has only had one line of duty death that occurred during a training accident in the 1990s.

“It’s really an interesting mix of sombre moments to reflect on,” Polley said.