June 21 is Indigenous Peoples Day, a time to celebrate the history of First Nation, Inuit and Metis people in Canada , and Cochrane has a some big celebrations planed in conjunction with the Stoney Nakoda Nation.
0
Jun 12, 2019 10:37 AM By: Chris Puglia 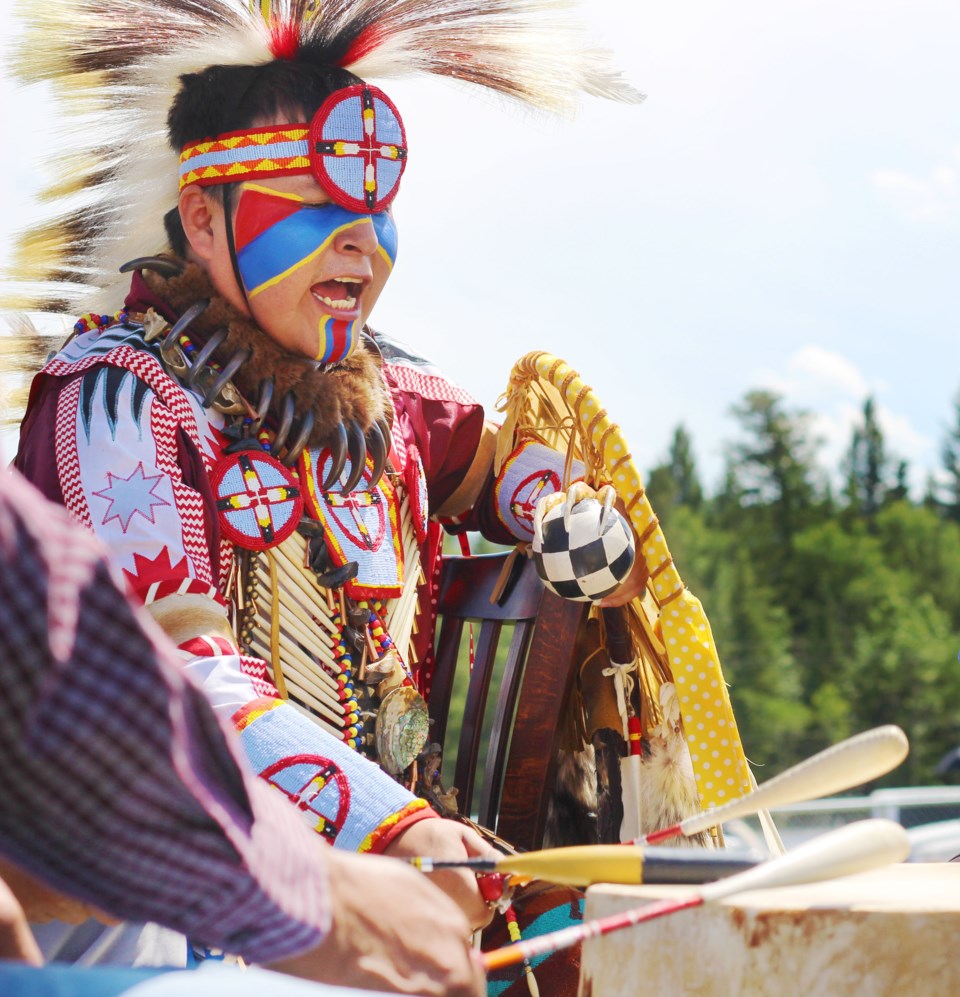 Dallas Powderface sings and drums during an Aboriginal Day powwow on June 21, 2018 at the Chiniki Cultural Centre.

June 21 is Indigenous Peoples Day, a time to celebrate the history of First Nation, Inuit and Metis people in Canada , and Cochrane has a some big celebrations planned in conjunction with the Stoney Nakoda Nation.

Mitford School is kicking off the celebrations on June 14 with its annual powwow event. Teacher Shawna Weaver said the day has been a collaborative effort between the school's Indigenous students, staff and members of the Cochrane and Stoney Nakoda communities.

The day will kick off in the morning with students engaging in nine pre-planned sessions incorporating traditional learning, Indigenous games, dancing, crafts, languages and more.

Weaver said the sessions have been planned and will be led by the school's Indigenous students who will be using their strengths to teach those in attendance about Indigenous culture.

Starting at 12:20 p.m., a traditional powwow led by Johnny Powderface and the Chiniki Lake Drum group will showcase traditional drumming and dancing. Students from both Glenbow Elementary School and the Cochrane Christian Academy will be attending the event.

Mitford and Glenbow schools have every year made an effort to recognize Indigenous Peoples Day.

"Many of our students at Mitford are First Nation, Metis and Inuit and it's important to celebrate these students," said Weaver, who added the school celebrates Indigenous culture and the contributions the Stoney Nakoda people have made to the region on a regular basis.

Through the recognition of Treaty 7 Day, Orange Shirt Day and engagement with Indigenous elders and communities, Weaver said forging those relationships is done throughout the school year.

On June 20, Holy Spirit School will host its celebration with a powwow complete with various forms of Indigenous dancing (Grass, Fancy, Traditional, Jingle, etc.) and the accompanying drumming. The celebrations will be divided into two sessions, the first at 1 p.m. until 1:45 p.m. for kindergarten to Grade 3 students and then from 2 p.m. to 2:45 p.m. for grades four to six.

On June 21, Glenbow Ranch Provincial Park has a massive event planned complete with everything from traditional music, games and art, to educational walking tours.

Kicking off at Noon the four-hour event will be a celebration of Indigenous culture and heritage.

Sarah Parker, executive director of the park, who is excited about what is planned for the day, said the entire program has been created in partnership with the Stoney Nakoda Nation thanks to the cooperation of Stoney Elder Virgle Stephens.

Highlights of the day's events include a walking tour that will identify species native to the park and their traditional Stoney names and uses. Glenbow Elementary School students have also contributed to this knowledge through an art research project.

"Glenbow elementary students have done some beautiful artwork and research on fauna and flora," said Parker, adding each piece displays both the English and Stoney name of the species.

Additional artwork from Glenbow's Warrior Paint: A Culture of Caring collection will also be on display throughout the day. Starting in 2013, students in Glenbow school's Roots and Wings program began painting greeting cards depicting their ancestors. The cards are sold in support of the Morley Iyahrhe Nakoda Food Bank Society and to date the work has raised nearly $10,000. It is a special treat to have pieces of the collection at the park, they are usually displayed at the Peter Lougheed Visitors Centre.

"There will be lots of learning opportunities, lots of hands-on learning and lots of great entertainment," said Parker.

Organizers have also made accommodations to get people from Cochrane and Morley to the event via a free shuttle service. Those wishing to take advantage of the shuttle are asked to register online at https://www.grpf.ca/indigenous-day. Parker said the shuttle will help alleviate parking strains. Those who do want to drive are recommended to carpool as space is extremely limited.

Aside from the learning opportunities, there will also be the opportunity to buy traditional Indigenous arts and crafts at the vendor market. Parker said there is still space available and those interested in attending can contact the park for details.

Parker said everyone at the park is excited for the day and she sees it as a great opportunity to educate more people about Indigenous culture.

"It's a great way to get to know your Stoney neighbours and celebrate community," she said.