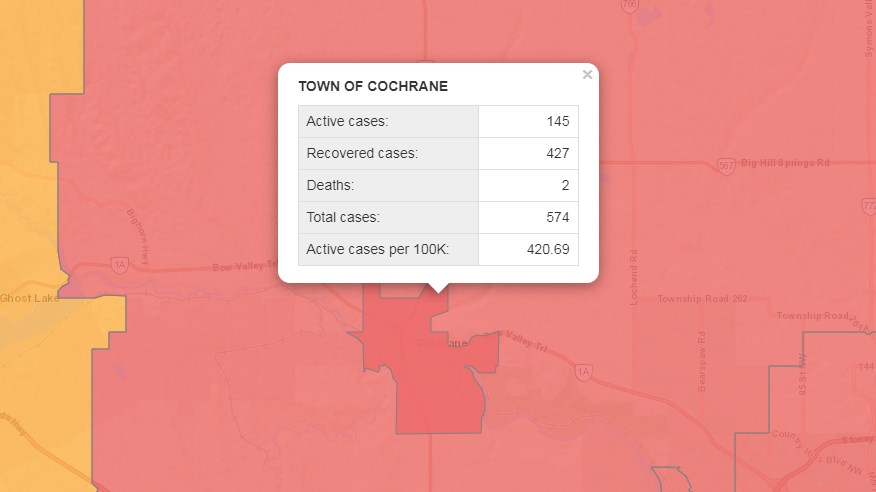 COCHRANE— Cochrane’s COVID-19 cases remain well above 100 at the end of the day on Thursday (April 15).

The town crossed the 100-case mark on April 8 for the first time.

Cochrane currently sits at 145 active cases, and has recorded 574 cases in total. Two people have died, and 427 have recovered from the disease.

Manachaban Middle School, Rancheview School and St. Timothy School are on alert status with four or fewer cases, while Cochrane High School and Cochrane Christian Academy are on outbreak status with five or more cases.

Across the province, 478 schools are on active alerts or outbreaks, which represents roughly 20 per cent of Alberta’s schools.

Alberta Education has approved a joint request from the Calgary Board of Education and the Calgary Catholic School District to move all Grade 7 to 12 classes online for at least two weeks, due to a sharp increase in cases in those age demographics.

Effective Monday, all extracurricular youth sport, recreational and performance activities within the city are required to take place outside or paused for the same two-week period.

Alberta’s chief medical officer, Dr. Deena Hinshaw urged parents and students to continue to make good decisions and reminded them that social activities outside of school can easily spread the virus, putting schools at risk.

Over the past 24 hours, 1,646 new cases have been identified across Alberta, and the province has completed roughly 17,200 tests. The province currently sits at a 9.5 per cent positivity rate.

In that same span of time 1,020 variants of concern have been identified, which represents 54 per cent of active cases in the province.

There are currently 416 people being treated in hospital, including 86 in intensive care units.

The province recently reached an important milestone in the vaccine rollout program, having vaccinated more than 1,000,000 Albertans.