Steve Jobs, Mike Zuckerberg, Bill Gates and Tim Berners-Lee are icons of the digital age and have helped to shape computing and the internet over the past 30 years, but have you heard of Bill Belsey? The RancheView School teacher has long roots in th
0
Mar 21, 2019 1:00 AM By: Chris Puglia 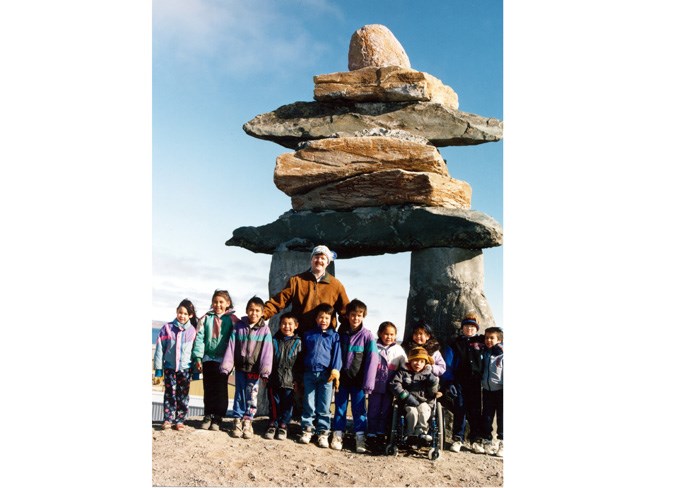 Steve Jobs, Mike Zuckerberg, Bill Gates and Tim Berners-Lee are icons of the digital age and have helped to shape computing and the internet over the past 30 years, but have you heard of Bill Belsey?

The RancheView School teacher has long roots in the world of computing, and his influence has a wider reach than many might know.

In the 80s, he brought the first computer to Canada's Arctic and later helped develop the first Inuktitut computer-related words for Canada's Inuit. he also coined the phrase cyberbullying, which is used worldwide to discuss one of the most pervasive problems the internet has in modern time.

Last week, Belsey's contributions were recognized when he was invited by Berner-Lee - the man who created the World Wide Web - to participate in the 30th anniversary of his invention.

Belsey was included because among those in the upper echelons of internet technology, he is considered a pioneer.

"They said I had made significant contributions to the development and understanding of the web and the internet in general," Belsey said.

Like most people who find themselves at the forefront of new frontiers, Belsey recognized how important computers and what would eventually evolve into the internet would be to the world.

In fact, he thought the technology was so important he eschewed food for a computer.

When he took a job as a teacher in Arviat, a fly-in community in Nunavut, it was common practice for the government to give new hires a $1,000 bonus. Most used the money to buy food and supplies, especially goods that had to be barged to the community in the summer.

Instead, Belsey used his money to buy a computer.

"There were no computers in the North. None in government nor in business," Belsey recalled.

While it was still an era where those predicting the power computers would have on the world were being scoffed at - even Belsey had his share of detractors among his colleagues - he described himself as a convert.

Like a cyber-missionary, Belsey began weaving technology into the lives of Canada's Inuit. In 1984, he and Barbara Beveridge, a classroom assistant, collaborated to develop the first Inuktitut words - written in syllabics - to describe computer technology.

In the early 1990s, he developed the very first community access centre in the Canadian Arctic called “Igalaaq”  - Inuktitut for window - at the Leo Ussak School. The idea was honoured with the Royal Bank and Conference Board of Canada’s National Partners in Education Award, was featured in the Ottawa citizen and attracted the attention of the then-prime minister Jean Chretien, who Belsey had the opportunity to meet. His work also earned him a invitation to the world-renowned MIT to work on issues regarding information and communication technology with some of the leading minds in the industry.

Describing Inuit people as visual learners, a product of their oral history, Belsey said they gravitated to computers. He recalled a moment when an elder, who like many of that era was born in a seal skin tent, and remembered a time before contact with white people or technology in general, first saw a computer.

"The elder said he could envision this (the computer) being used to preserve Inuit culture," Belsey said, illustrating the connection Inuit had to technology.

Today, Belsey continues to incorporate technology into the classroom with a philosophy the promotes the positive effects it can have on society, with an eye to educate about the possible negatives.

"Thoughtfully implemented technology can do great things for the world," he said.

As the creator of one one of the first cyberbullying websites - bullying.org -  which was developed in response to Columbine and Taber school shootings Belsey knows the dangers. His work with cyberbulling earned him an interview with CBCs Peter Mansbridge, which skyrocketed the interest in the site when Mansbridge described it as "one of the best websites for kids in the world."

"Our servers crashed after he said that," Belsey remembered with a chuckle, adding that for 20 years it was one of the most visited websites in the world. it also won the Cable and Wireless ChildNet Award, which goes to projects that make the Internet a better and safer place for children.

"This project was also named as a finalist in the Stockholm Challenge Awards, an award that has been called the Nobel Prize of the Information Technology (IT) world," according to Belsey's website.

Knowing the dangers of the internet use badly, Belsey promotes positive use at Rancheview. His students create educational podcasts and develop webpages to share their assignments

"The chjallenge is how we embrace to the best of what technology can offer and still and still be aware of the darker side and the things that detract from learning." he said.

Besley said he was honoured to be invited to participate in the 30th anniversary celebration with the "who's who" of the internet world.

To learn more about Belsey and his work with technology, go to http://www.billbelsey.com/