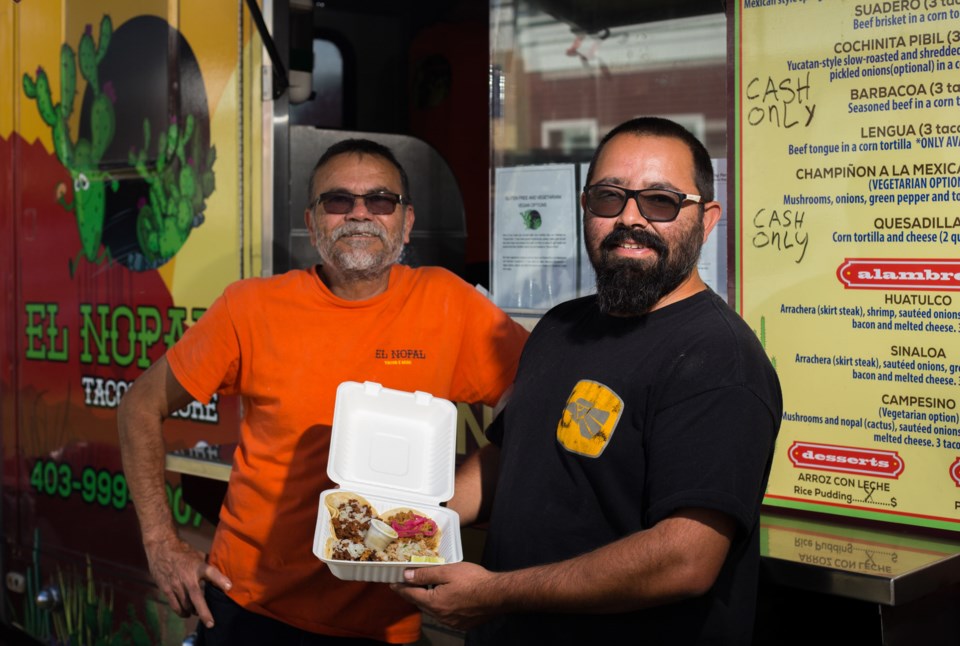 COCHRANE— One of the latest edition to Cochrane’s culinary scene is finding success on the streets of the Town’s Historic Downtown,

Manuel Garcia said the launch of his food truck El Nopal “is a dream come true.”

The idea to create the El Nopal Tacos and More food truck formed when he began talking to his uncle Efrain Serrano, a fellow foodie.

Together the duo crafted a plan to make the dream into a reality.

Garcia's road to Cochrane was a winding path.

He was living in New Jersey and went for a holiday in Montreal where he met his wife Karina— Through her, he would soon call Canada home moving to the country in 2012.

They originally settled in Montreal but Garcia said it proved difficult finding somewhere to work in Quebec.

“I told my wife I want to move to a place where I can grow and work in the field I know,” Garcia said, explaining how the couple ended up in Cochrane. “We took a plane and we landed in Calgary.”

Garcia first began working in exteriors and soon launched his main company  Magic Siding and Roofing. Yet, he still held on to the dream of opening a restaurant.

Garcia grew up in his parent's restaurant in Mexico and fostered a love for creating homemade meals.

In his new home, one of his favourite things to do was to host barbecues for his friends and family.

“The next thing you know there’s like 40 people in the backyard eating tacos,” Garcia said with a laugh.

The barbecues, which boasted a grill he brought from Mexico, grew in popularity and people would often tell him he should open a restaurant to showcase his recipes.

However, Magic Siding and Roofing kept him busy, he said, making it difficult to launch a food truck.

This challenge was overcome when it was decided Garcia's Uncle Serrano could run El Nopal.

“He takes care of the truck— Everybody loves the food,” Garcia said. “People who’ve been in Mexico can really identify the food. It’s authentic.”

The recipes used at the truck have been passed down from his parents and Serrano has recipes to share as well, Garcia said.

When one takes a bite out of a taco they can feel like they are in Mexico, he said.

“There is no such place I can go and eat real tacos,” Garcia said, adding he has seen people from as far away as Olds visit the food truck after hearing about it. “As far as describing the food, it’s just as authentic as you can get.”

The menu features something for everyone, Garcia said, adding vegetarian options are available.

Garcia recommends those coming to the truck for the first time should try the mix and match taco combo so they can taste all the tacos available at El Nopal.

“Then you decide the next time what you like the best and you go for that one,” Garcia said.

The truck officially launched in June and it has been great so far.

It was challenging getting the food truck going at first, he said, because they chose to launch during COVID-19.

They were unsure what to expect, he said, and opening El Nopal involved many conversations with the Town of Cochrane and Alberta Health Services to ensure all health protocols were being met and followed.

“After that everything else just started to role,” Garcia said.

Garcia was on hand to help Serrano during the first month of the food truck opening to ensure everything went smoothly.

“We planned this for a long time and it finally came at the right moment at the right time,” Garcia said. “Without my uncle, I couldn’t open my truck. Everything settles at the time it needs to be settled.”

Looking to the future Garcia said they are hoping to add another truck into the mix that can split it’s time between Calgary and attending special events.

“We would like to keep a truck in Cochrane and have a truck for Calgary,” Garcia said. “That’s what we’re hoping in the near future.”

El Nopal operates Wednesday to Sunday from Noon to 5 p.m. and from Noon to 6 p.m. on Fridays and Saturdays. You can find El Nopal in the Historic Cochrane Downtown.