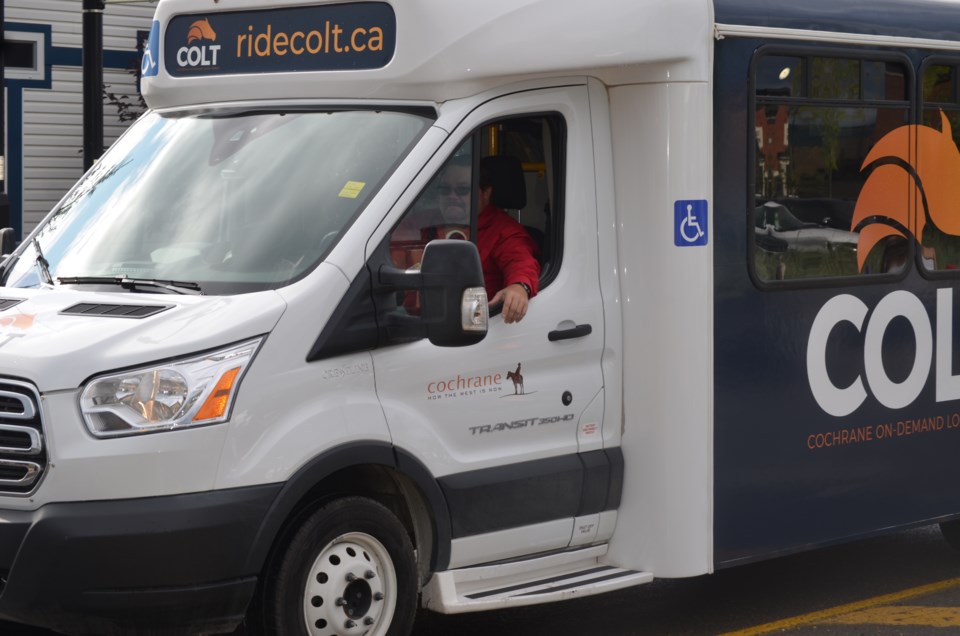 In an effort to get people in the habit of using Cochrane's new transit system, which will launch Oct. 7, the town is offering the service for free until Jan. 1

Town council officially gave the green light for the launch of Cochrane on Demand Transit (COLT) when it approved the transit bylaw at Monday night's regular meeting. The bylaw establishes the fee schedule, rider etiquette and the penalty structure for fines relating to offences such as littering or fighting on the bus.

Mayor Jeff Genung lauded the work administration and the Transit Task force did to get the service operational and for deciding to extend the free period.

"I am glad we're extending that and really getting people out there and give them a chance to take the bus, get used to the bus and find out where their closest bus stop is. I'm excited about this.

Transit consultant Devin LaFleche said the free pilot period will also allow time to work out any kinks the service might have, including not having the right buses available right way. Due to a supply problem with the chassis for the model being used by the town, three of the buses on the road will initially be City of Calgary transit buses.

Polls and stop locations have been installed and signage will begin appearing on Sept. 23, which LaFleche hopes will start creating excitement for the launch. The RideColt booking app is also available for download and is being tested by town staff.

Leading up to the launch, town staff will be at tonight's night market in Historic Downtown as well as the remaining Cochrane Farmers' Market promoting the service and answering questions. The pre-launch engagement will also include meeting with community youth, seniors, business and community associations.

The cost to use the system was adjusted slightly to include a one way single fare of $2.50 and tiered monthly services for adults ($50), seniors ($30) and students ($25). There will also be a special rate for low-income users, which will be determined on a sliding scale following an assessment by Cochrane Family and Community Support Services (FCSS). Children under five years old ride for free.

Initially, the COLT system was approved based on an across-the-board $2.50 rate, which was adjusted later taking into account other services across the province.

"The more fare revenue we get the more revenue we have to work with for the service," said LaFleche adding that means attracting as many riders as possible. "If there is a barrier from the fare we can actually deter people from using the service, especially in a town like Cochrane."

LaFleche is also confident that based on ridership projections, the change in fee schedule will not affect the projected return rate, which was determined based on ridership of 35,000 annually though the expectation is for 55,000 riders annually at the low end.

Coun. Marni Fedeyko asked that council ensure that the public was made aware that the COLT service is not meant as a replacement for the Rocky View Handi Bus.

LaFleche said while the COLT buses are wheelchair accessible there are services unique to the Handi Bus, such as driver assisted boarding, which is not available through COLT.

"We do have the ability for local trips through the VIP system  where certain accounts could get curb-to-curb service so we could actually provide that level of service. I don't know what the impact that would be on Rocky View Handi Bus riders especially because a lot of their trips are regional, those are the really important ones," said LaFleche. "It's not really an apples-to-apples comparison as far as the regional service because we don't offer that."

Wheel chair access can be requested when scheduling a trip, which will ensure availability when the bus arrives, added LaFleche.

The transit bylaw is based on the work of the Transit Task Force and public priorities captured through public engagement, as well as best practices in the public transit industry.

Local transit in Cochrane was approved in 2018 as part of the 2019-2021 budget. The system was developed as Canada’s only fully only on-demand service after extensive community consultation. Transit riders will request a bus from one designated stop to another designated stop in town.

The town received $6 million in provincial GreenTRIP funding for buses, the transit hub – which will go to the town for budget approval this fall – and bus stops.

Buses in Cochrane will serve local destinations initially, but plans are underway to add regional destinations like Crowfoot LRT station and post-secondary institutions in Calgary.

Assessment of the transit pilot will be reviewed based on factors such as ridership, wait times, ride time and online star ratings available through the app.

COLT buses will all have bike racks in the new year.

Children can ride the bus at parental discretion (no minimum age).

Use the mobile app or call COLT directly to request a bus at a specific stop at a specific day and time. Buses can be requested up to a week in advance, or just minutes in advance.

no smoking, vaping or cannabis use.

The COLT bus is scheduled to be at Cochrane Farmers’ Markets this month:

For more information, including a map of stop locations, go to ridecolt.ca