Getting a playground for the New Year

Martin Parnell is at it again – everyone is invited to attend the 6th Annual Martin Parnell’s Walk/Run on Dec. 31 at Spray Lake Sawmills Family Sports Centre (SLSFSC) in Cochrane.
0
Dec 23, 2015 12:00 AM By: Cochrane Eagle Staff 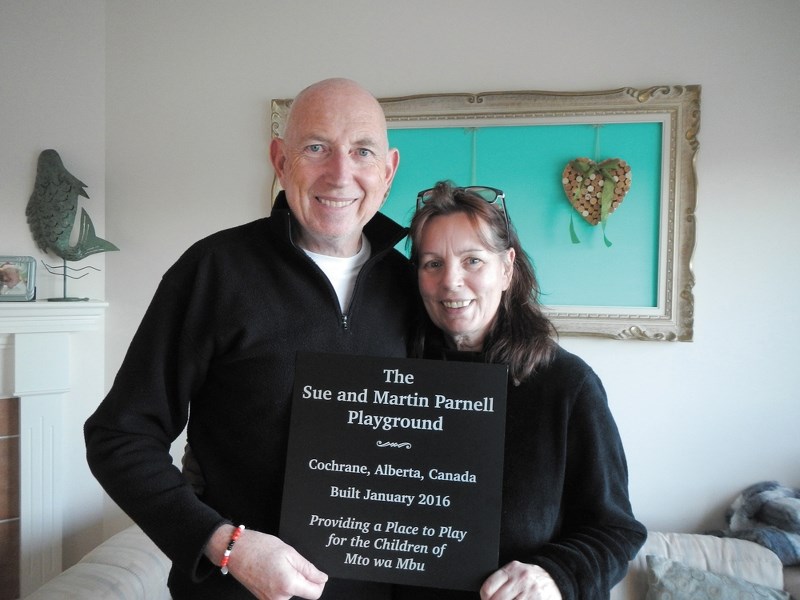 Cochrane&#8217;s Martin Parnell, and wife Sue, are spearheading an initiative to raise funds for a playground for youngsters attending the Lindsay Kimmett Kindergarten in Mto wa Mbu, Tanzania, Africa. Construction on the playground is underway with completion scheduled for January, 2016.

Martin Parnell is at it again – everyone is invited to attend the 6th Annual Martin Parnell’s Walk/Run on Dec. 31 at Spray Lake Sawmills Family Sports Centre (SLSFSC) in Cochrane.

Despite discovering he had a “large blood clot” in his brain at the end of February this year, the Cochrane local is going ahead with the event to raise money to build the Sue and Martin Parnell playground for the Lindsay Kimmett Kindergarten in Mto wa Mbu, Tanzania, Africa.

“I found out two months ago that the clot had shrunk about seventy-five per cent,” said Parnell. At which point he was informed by his doctor that he could participate in the event.

Aside from the blood clot, Parnell and his wife, Sue, were unsure if they would hold the annual run/walk event this year because it was only meant to be a five-year endeavour, ending with last year’s, that would help fundraise for Martin’s “Quest for Kids” initiative.

“In 2010, following a 25-year mining career, Martin started his ‘Quest for Kids’ initiative. Over the next five years he completed 10 Quests, states Parnell’s website.

According to Martin’s website, his Quest for Kids initiative’s goal was “attempting to complete 10 Quests in five years, raise $1m for Right To Play and help 20,000 children.” It was a goal he completed with over “$1.3 million raised for the humanitarian organization Right To Play and 27,000 given the gift of hope.”

When people in the community began asking him questions about this year’s walk/run event, he knew he couldn’t let it end.

The Parnells learned of the need for a playground at the Lindsay Kimmett Kindergarten and approached Lau and Leesha Mafuru, directors of Boma Africa, a non-profit tour company that undertook the building of the school.

“Providing fully prepared and expertly guided tours, Boma Africa will deliver the experience of a lifetime, while at the same time, offering a solution to the question of responsible tourism.”

According to Leesha, their company’s overall goal is to build a birthing centre in Mto wa Mbu, Tanzania.

“We could see there is a need for a place so more women can have safe deliveries,” said Leesha.

When she and her husband approached the village council they were offered the land they needed, if they would also build a kindergarten for the community as well.

“It was a great way to acquire land, rather than just buying it.”

“Most of these kids probably have never seen a playground in their life,” said Leesha, who explained the closest playground is located 130 kilometres away from the school.

This cause is near to Martin Parnell’s heart as he spent the past five years fundraising for children’s initiatives such as Right to Play and his Quests for Kids.

The Parnells and Mafurus are well on the way to their goal of $10,000 to build the playground with $5,720 raised so far. They’d like to pass along a special thank you to the Rotary Club of Cochrane and Down Under Travel for their generous donations.

Lau flew back to Tanzania last week to begin starting construction of the playground even though there is still funding needed.

“You have to have faith sometimes,” said Martin Parnell in regards to why they started the project before the walk/run event.

He’s confident the surrounding community will help them reach their goal and that the children of Lindsay Kimmett Kindergarten will have a fully functional playground by the “end of January.”

For those interested, the 6th Annual Martin Parnell Walk/Run event will run 9 a.m.-3 p.m. Dec. 31 at SLSFSC, and people are “welcome to come” any time as people can choose the distance they wish to complete.

There will be information tables set up by groups such as the Cochrane Running Club and the Rotary Club of Cochrane. Hot chocolate will be provided.

As for Martin, he’s excited but “nervous” to be attempting another marathon.

“I haven’t been training – I’m just going to see how far I can get,” said Martin.

The last year has been incredibly challenging for him but he’s thankful to be alive today and for all the support he’s received.

“I’ll be running on adrenaline, emotion, and a few tears – if I finish it will be on the shoulders of other people.”

For more information about the playground project, please visit bomaafrica.com