Despite a step forward toward rehabilitating orphaned black bear cubs in Alberta since the province lifted its ban in April, the Cochrane Ecological Institute said it is faced with another policy issue, which the head of the institute, Clio Smeeton,
0
Sep 20, 2018 1:00 AM By: Amy Tucker 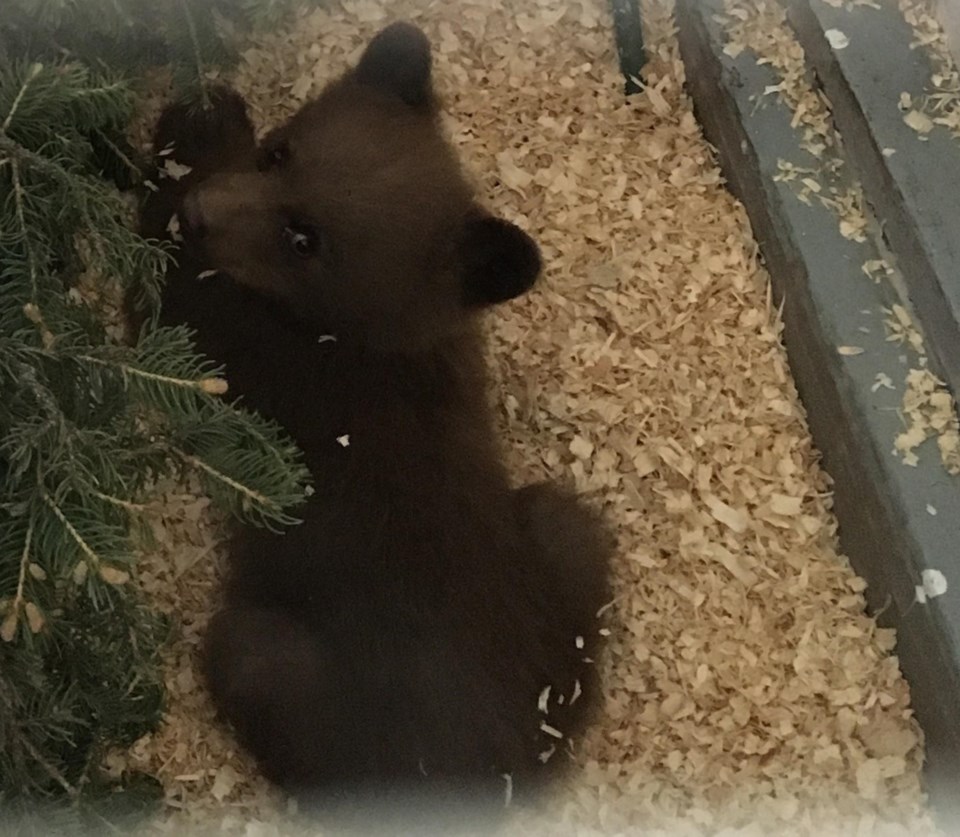 Charlie is the first black bear cub to be accepted for rehabilitation at the Cochrane Ecological Institute since the policy change was announced in April.

Despite a step forward toward rehabilitating orphaned black bear cubs in Alberta since the province lifted its ban in April, the Cochrane Ecological Institute said it is faced with another policy issue, which the head of the institute, Clio Smeeton, said could cost the bears’ lives. Last week, Alberta Parks and Wildlife (AEP) met with the Cochrane Ecological Institute (CEI) to discuss the province’s Oct. 11 release date back into the wild. Smeeton insists that the October release for the two orphaned bear cubs being rehabilitated is too soon. “Releasing orphaned bear cubs when they are eight to nine months old ... at the onset of winter, in the middle of the hunting season (Sept. 27 to Oct. 31), at a time when they are at the greatest risk of predation by other bears and carnivores and in a completely strange place has huge animal welfare concerns,” Smeeton said. The two black bear cubs – Charlie and Maskwa who were taken in by the institute last spring – are the first orphaned cubs in Alberta to be allowed to be rehabilitated since an eight-year ban was lifted by the province. During the ban, the bear cubs would be shot. The main reason for the meeting last week was to obtain scientific rational from AEP – which the institute has been asking for since April  – for releasing the cubs at eight months old, during hunting season and right before hibernation. “We asked in April, June and September and were assured in writing in September 2018 that the documents supporting AEP’s decision of a onset of a winter release date would be provided at the Sept. 11 meeting. These documents were not provided,” Smeeton said. “I begin to doubt if they exist, because if they exist why not provide them?” Rob Simieritsch, who met with the institute on behalf of the province, said that AEP is working on compiling the data used in deciding the release date for the bears, but for now only the protocol containing the “key data” is available. “We continue to work with CEI as a partner in bear rehabilitation and have asked CEI to provide us with any science and other technical information to help support their request before we make any decision on how we will proceed with the release of the two bears at CEI this year,” he said. The bears, according to Smeeton, will have a low chance of surviving if they are released in October due to multiple factors including becoming prey (such as the released Banff orphan bear cub that was killed by a grizzly last week) and that the bears won’t have the skills to properly hibernate. Smeeton said the government leaves costs and responsibilities of wildlife rescue, rearing and rehabilitation and release up to non-government agencies such as the Cochrane Ecological Institute. Angelika Langen, who helps operate a wildlife rehabilitation centre in B.C., which supports animals including black bears, said her institute aims for fall releases for cubs, provided they are the correct weight and that the date is after the first snow fall to lower the confrontation with other bears. She added it isn’t desirable to have bears hibernate at the facility since it increases habituation with humans, but it is possible to have them hibernate in mobile dens and transfer them into the wild. “There’s no blanket answer,” Langen said. An online petition lobbying to delay the bears’ release date has garnered over 45,206 signatures.